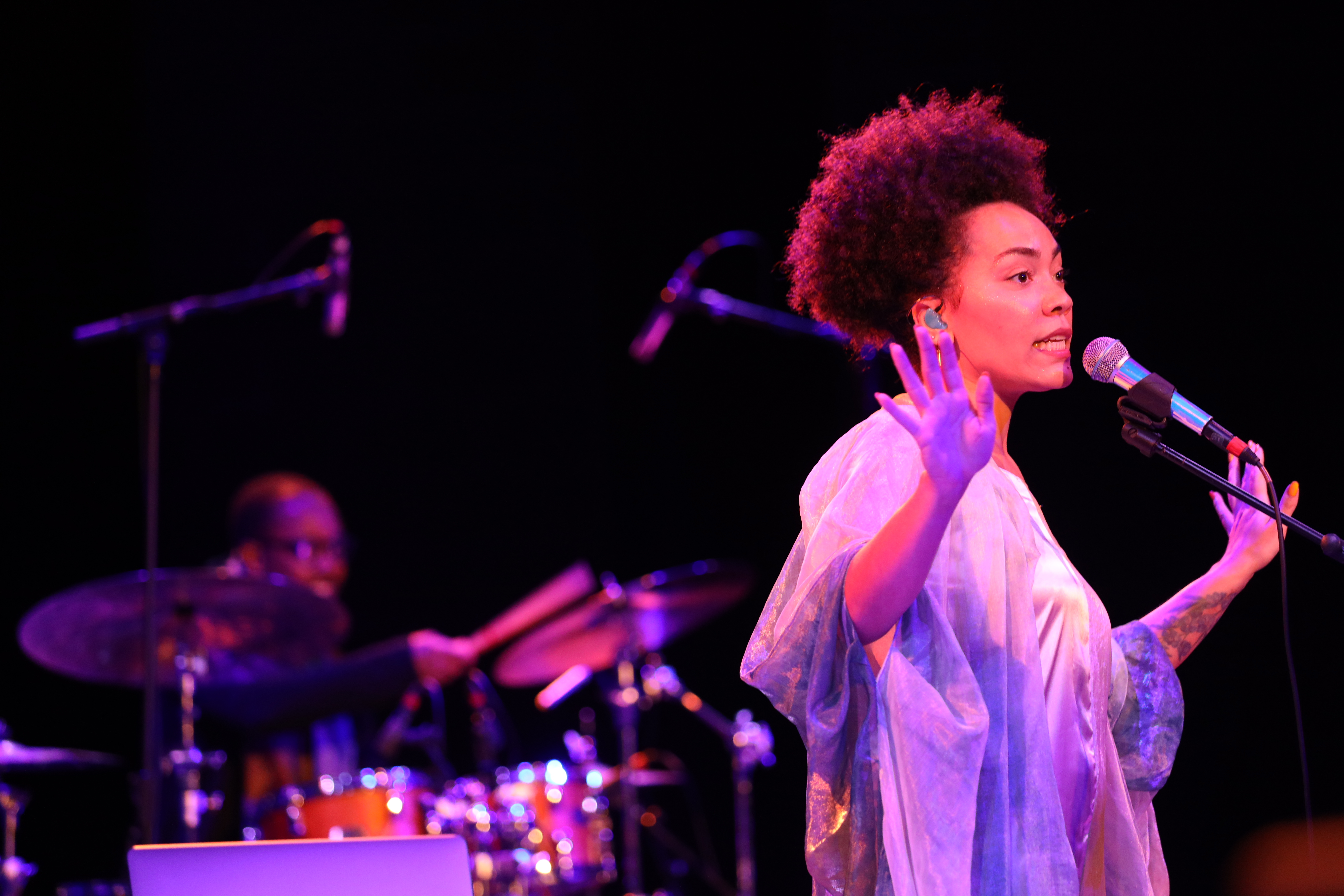 BROOKLYN, NY -- From Thursday October 21 to Saturday October 23, BRIC, a leading contemporary, multi-disciplinary arts and media institution anchored in downtown Brooklyn, hosted the return of its annual in-person indoor festival BRIC JazzFest, one of New York City’s premiere Jazz showcases that brings together legendary figures, groundbreaking artists and newcomers stretching across the spectrum of Jazz. This year’s BRIC JazzFest at BRIC House in the Ft. Greene neighborhood of Brooklyn was sold out for the first time in the festival’s seven-year history, three days before the festival even began.

The festivities opened with a set by trumpeter and composer Adam O’Farrill, who is not only the son and grandson of music royalty, but a Brooklyn native. O’Farrill is one of the fastest rising young stars in creative music. He previewed music from his upcoming recording, Visions of Your Other (Biophilia, November 12 release) in his set. O’Farrill’s music gently swelled and receded gradually drawing the listener in.

O’Farrill’s set in the Gallery was occasionally punctuated by trumpet pyrotechnics and powerful sounds coming from the adjacent Ballroom space where former Jazz at Lincoln Center trumpeter and noted educator Sean Jones, was leading a quartet through an enthusiastic set based on standards with gospel inflections.

Another rising star, vibraphonist Sasha Berliner, originally from the San Francisco Bay Area, but a Brooklyn resident for the last five years, followed on the Gallery Stage, offering rambunctious, free-flowing music. In contrast to the quartet she led at BRIC JazzFest in 2019, she performed with a quintet featuring saxophonist Jaleel Shaw.  Much of the music is from a new recording that she hopes to release this winter. The closing set on the Gallery stage was by guitarist Yasser Tejeda, another up-and-coming player. Tejeda led a four-piece band through a variety of songs that highlighted both the versatility and power of Dominican rhythms. He was a different sort of guitar wizard sometimes playing atop intricate rhythmic figures and sometimes integrating his axe into them.

Vocalist Cécile McLorin Salvant poked around the audience during the early portions of the first night, but at 10:25, she and pianist Sullivan Fortner took the stage to close out the first night. The two have an easy rapport, often working out the set list on the spot, and deep complimentary chops. Salvant dramatizes every song, highlighting each plot twist and turn with her sweet high range and commanding low notes. For all of their passionate innovation, they vibed like they were playing on a stoop, not closing the first night of a major Jazz festival. It was the Brooklyn spirit through and through.

By late Saturday the festival was winding down, it was abundantly clear that ambitious goals had been achieved.  Fred Wesley and the New JBs had turned the Gallery Space into a dance party.  Nearly half the crowd was on their feet grooving to classics like “Gimme Some More” and “Funky Good Time.”  Meanwhile on the Ballroom Stage, drummer Louis Cato was leading a jam session of leading young talent through favorites old and new.  The BRIC House was vibrant, and the sense of community was strong.

Those were among the principal aims for the festival, which returned to in person performance after a year of being virtual.  It was accomplished with an enterprising booking slate that included artists ranging from their 20s to their 90s, and a wide range of styles, some of which were clearly jazz, others somewhat Jazz-adjacent and some of it from other traditions that are germane to the Brooklyn music community.  Most of the performers had Brooklyn roots and nearly all spoke of the joy of performing to an in person audience again.

Just as Wesley, who is 78, turned it loose on Saturday, Marshall Allen, a spry 97, led the Sun Ra Arkestra in a rousing set to close Friday night’s festivities. The band whipped the crowd into a frenzy with their takes on “Stranger in Paradise,” a standard first heard in the ‘50s musical Kismet and their own remarkable “Halloween in Harlem.”

Weekend performances were highlighted by innovative performances by women in several different styles.  Bassist Adi Meyerson paid tribute to visual artist Yayoi Kasuma, whose work is currently on exhibit at the Bronx Botanical Garden.  Rapper Stas THEE Boss turned in a rousing set about the vagaries of relationships and the complications of vulnerability.  Vocalist Thana Alexa and her band featuring drummer Antonio Sanchez presented a rousing set of songs from her recording Ona, which pays tribute to great women around the world.  Linda Diaz, a former staffer at BRIC, began Saturday night’s festivities with a set of songs that ranged from standards like “My Funny Valentine,” to originals so personal that it was easy to imagine them written in a spiral notebook.  She performed an affecting rendition of “Green Tea Ice Cream,” a song that won her the NPR Tiny Desk (At Home) Contest in 2020.

Vocalist Madison McFerrin not only co-curated the festival, but arrived in an unruly pastel robe train and long familial coattails (she is the sister of Jevon and Taylor, and daughter of Bobby). She accompanied herself with a variety of samples, loops and electronically generated backing and when some technical problems emerged, she backed herself on piano and brought out Louis Cato for “I Ain’t Got the Time.”

McFerrin remarked after the festival on Instagram, “I cannot express how much love and gratitude I feel after such an incredible weekend of live music. Thank you to the team at BRIC... for inviting me to co-curate this year’s festival. To be able to bring so many amazing musicians together under one roof after the collective trauma of these past 18 months, was beyond healing. Thank you to everyone who came out and supported not just myself, but the live music community as a whole. Your presence and energy was something I will never forget..Thank you for bringing me back to life.”

Independent artistic consultant and co-curator Brice Rosenbloom of Boom Collective, producers of NYC Winter Jazzfest offered his own thoughts: “The artists I’ve spoken with and the friends and fans I’ve heard from all share positive messages of praise and gratitude. It felt incredible being back in festival mode with a full BRIC House! I appreciate being a part of this team and am proud of the work we did together...Until next time, stay inspired!”

BRIC’s own Director of Performing Arts Lia Camille Crockett remarked “Bringing together so many boundary-pushing artists from across the spectrum of the Jazz genre was truly a privilege. It was an unforgettable three nights for BRIC and our community. I’m honored that we were able to contribute to the modern day Jazz conversation in such a meaningful way. I look forward to seeing this festival, and so many of the emerging artists who showcased their talents, continue to grow and evolve.”

Two of the most interesting sets on Saturday were primarily instrumental with significant use of electronics.  C’est Tois, a trio of trumpeter jaimie branch, bassist Luke Stewart and drummer Tsecher Holmes, created brooding soundscapes with their electronics and then used their instruments to punctuate them with keening sounds suggesting winsome narratives.  L’Rain (aka Taja Cheek), recently named to the Pitchfork 25, a list of the most influential artists on the music scene today, led a five-piece band in a set of music drenched with feedback, electronic loops and potent guitar, saxophone and keyboard solos.

Finally, the festival looked back in triumphant ways.  On Friday, Roy Nathanson and singer-songwriter Nick Hakim did a set that reunited some members of The Jazz Passengers, one of the great NYC bands of the ‘80s and ‘90s.   And Samir Langus opened the night with music of the Gnawa tradition from Morocco, which recalled one of the titans of Brooklyn Jazz, the legendary pianist Randy Weston (1926-2018), who visited North Africa in the late 50s and made the rhythms a cornerstone of his music.  It was a great demonstration that all points in globe, if not the universe, have a road that leads there from Brooklyn. 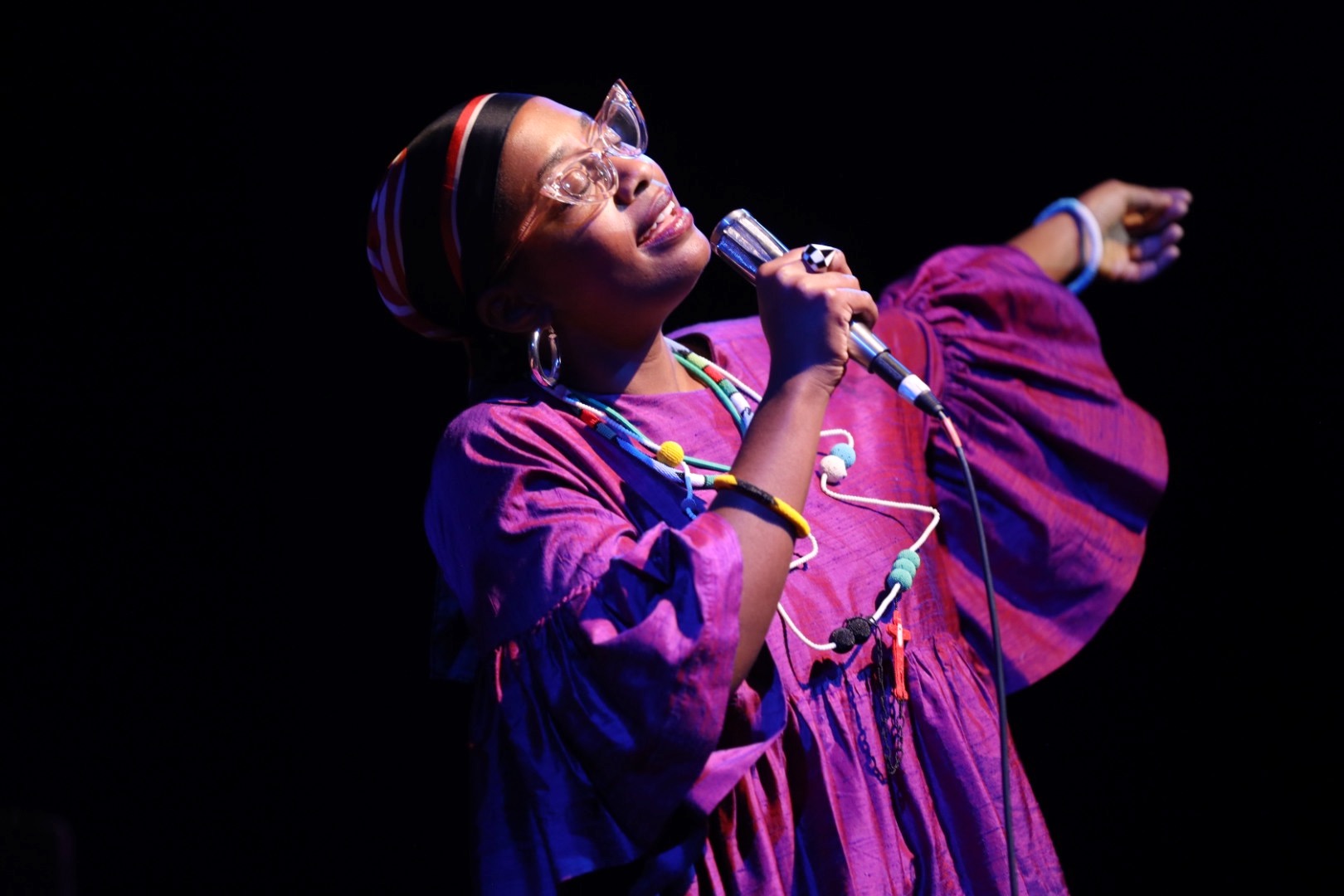 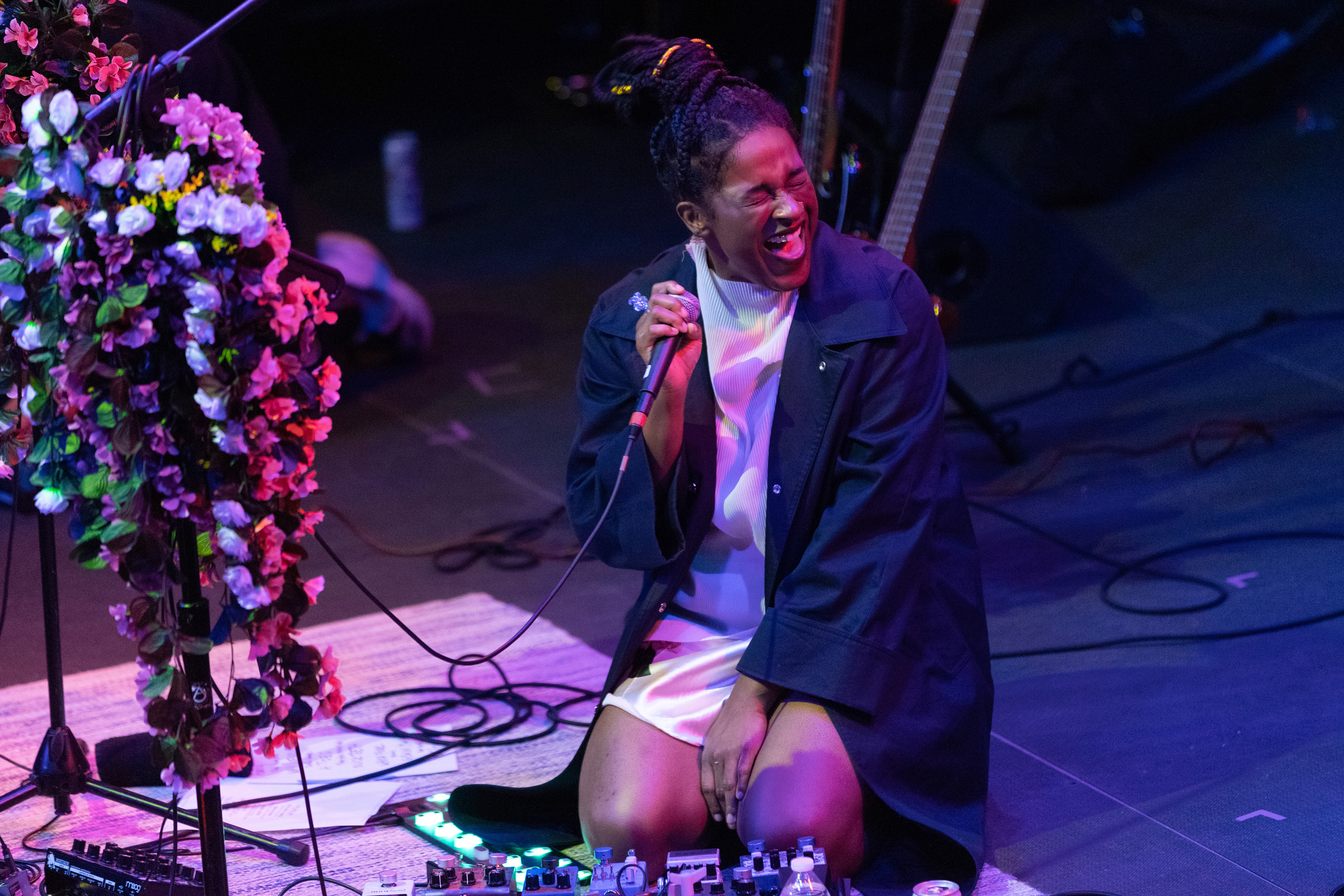 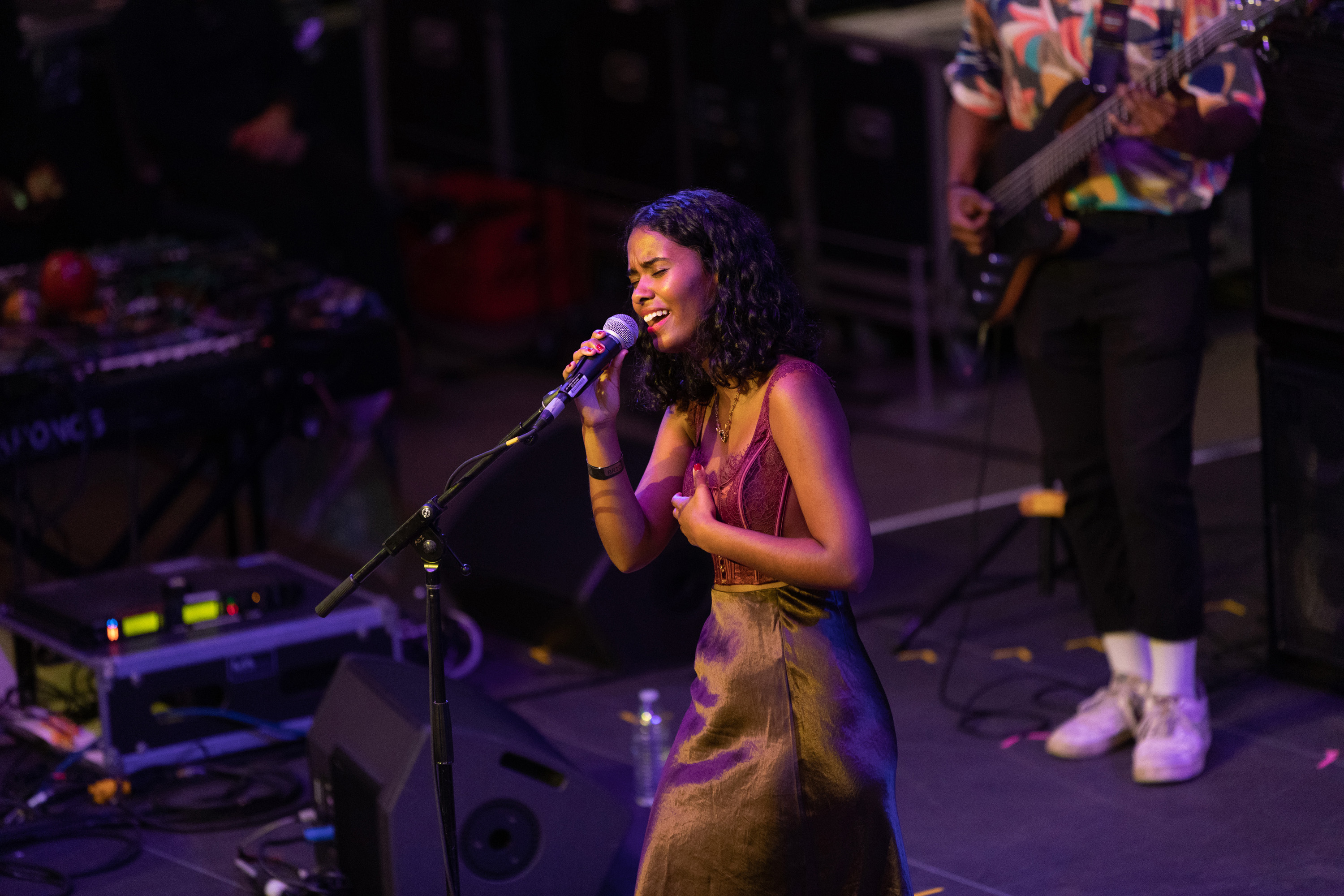 Vocalist and songwriter Linda Diaz, who won NPR’s Tiny Desk (At Home) Concert Competition in 2020 sings her heart out on the Gallery Stage at BRIC JazzFest on Saturday October 23, 2021 (photo credit: David Andrako) 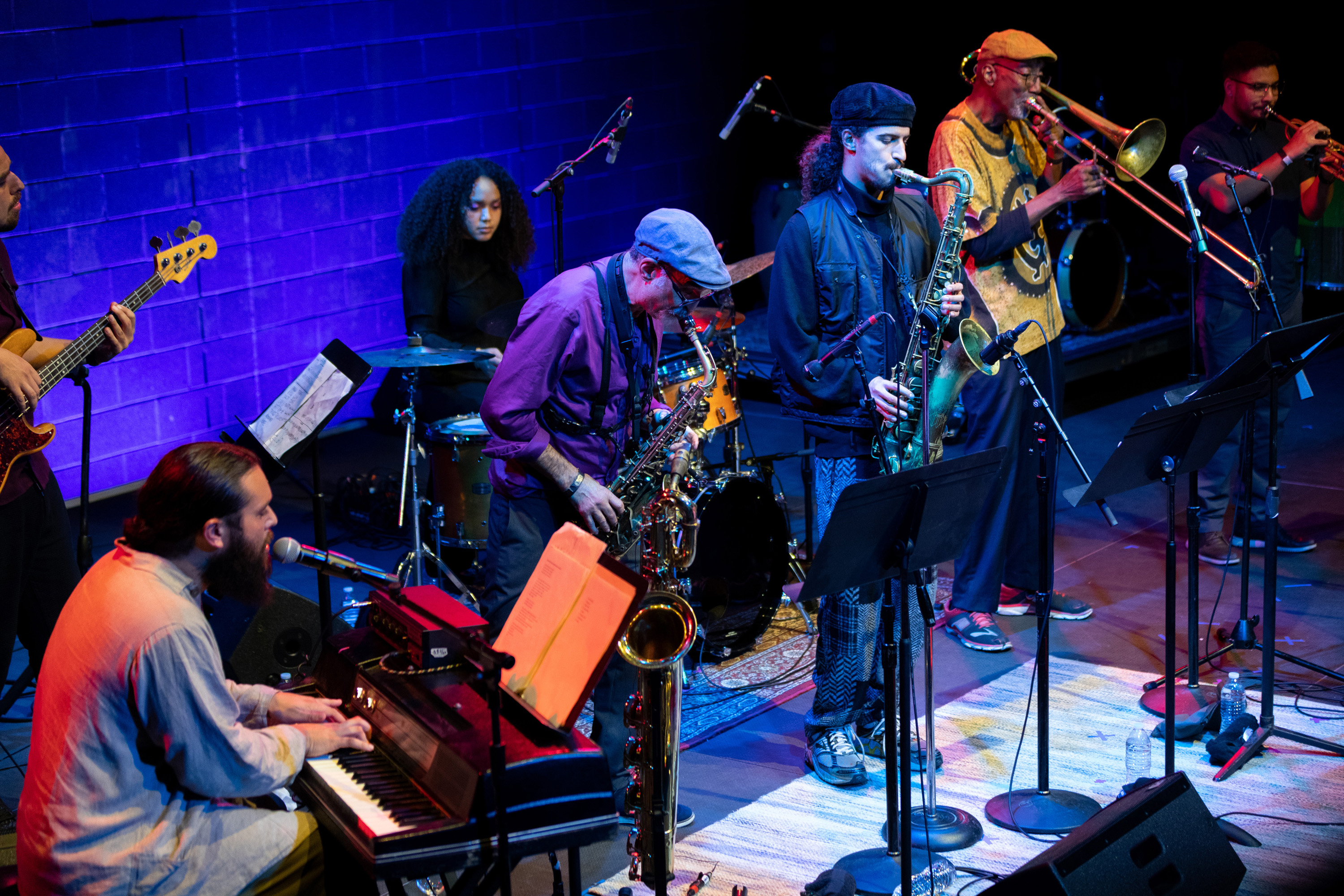 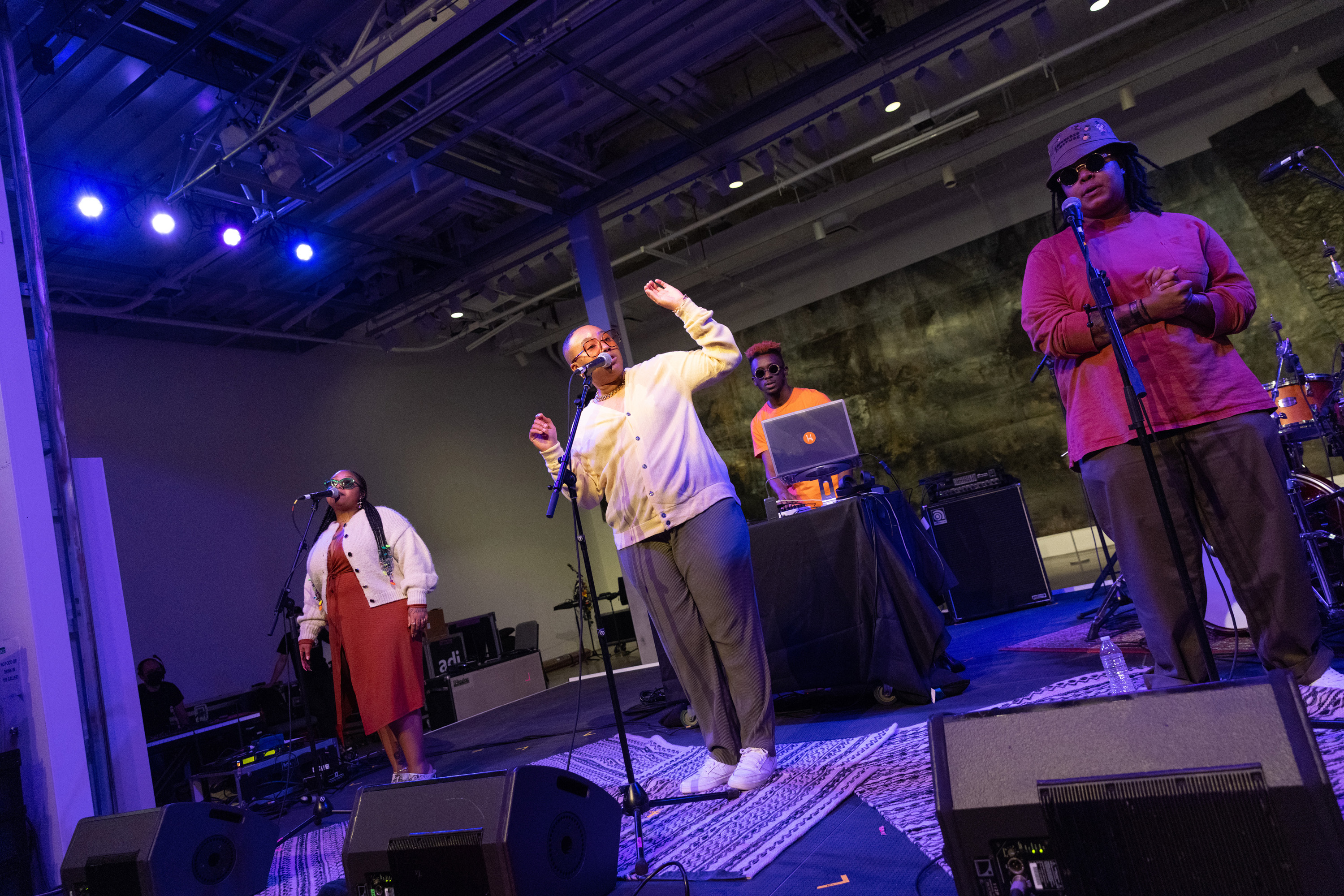 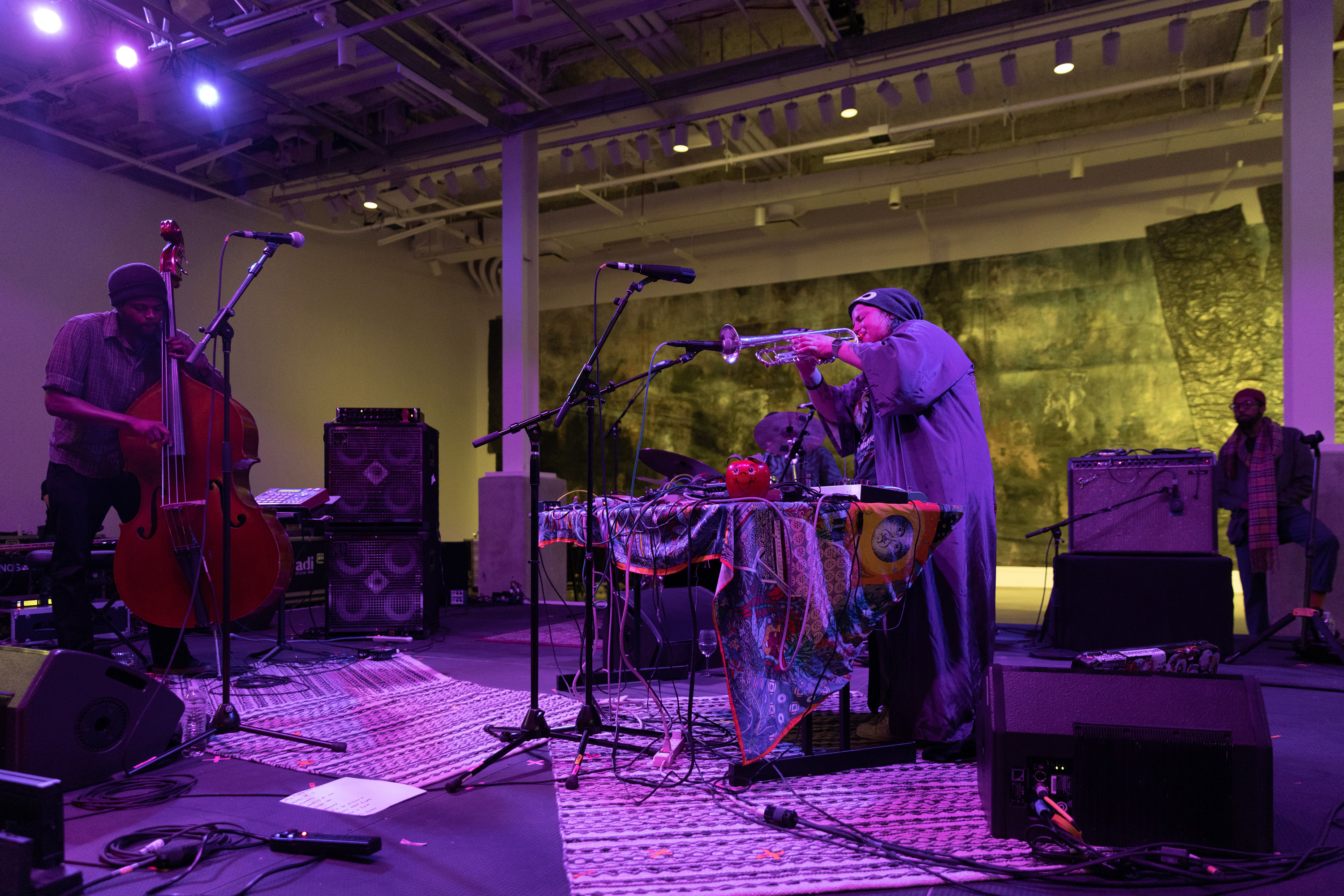 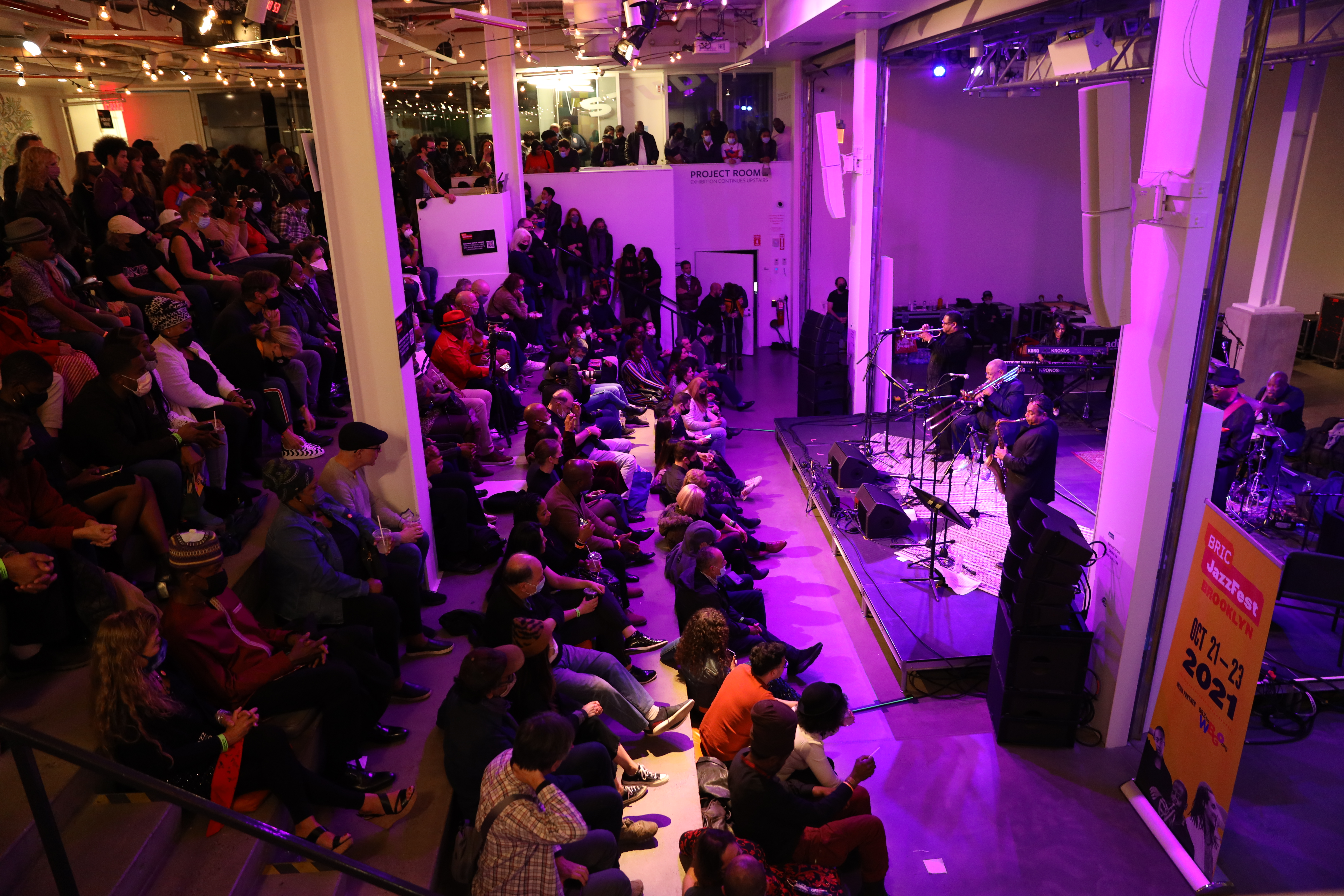 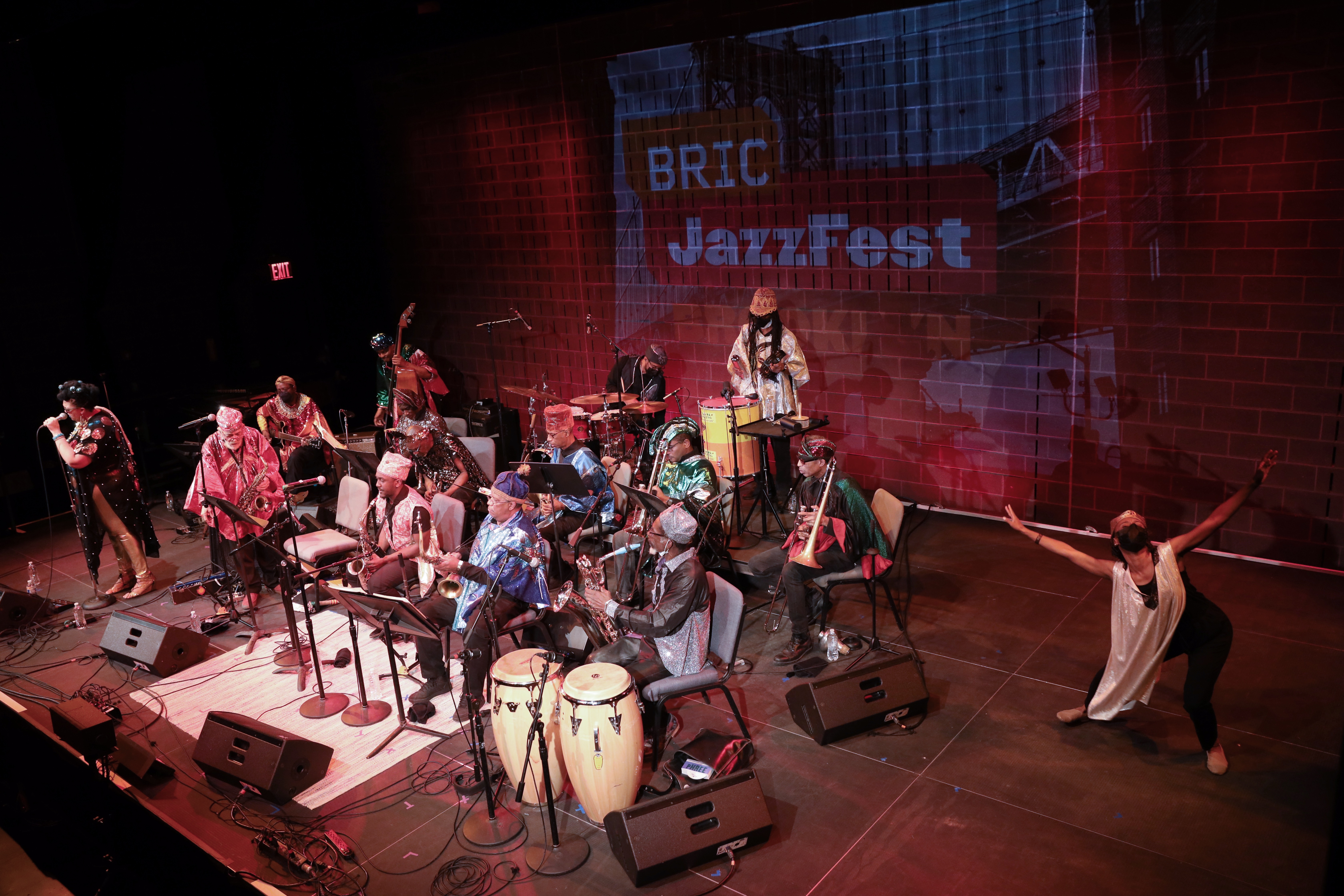 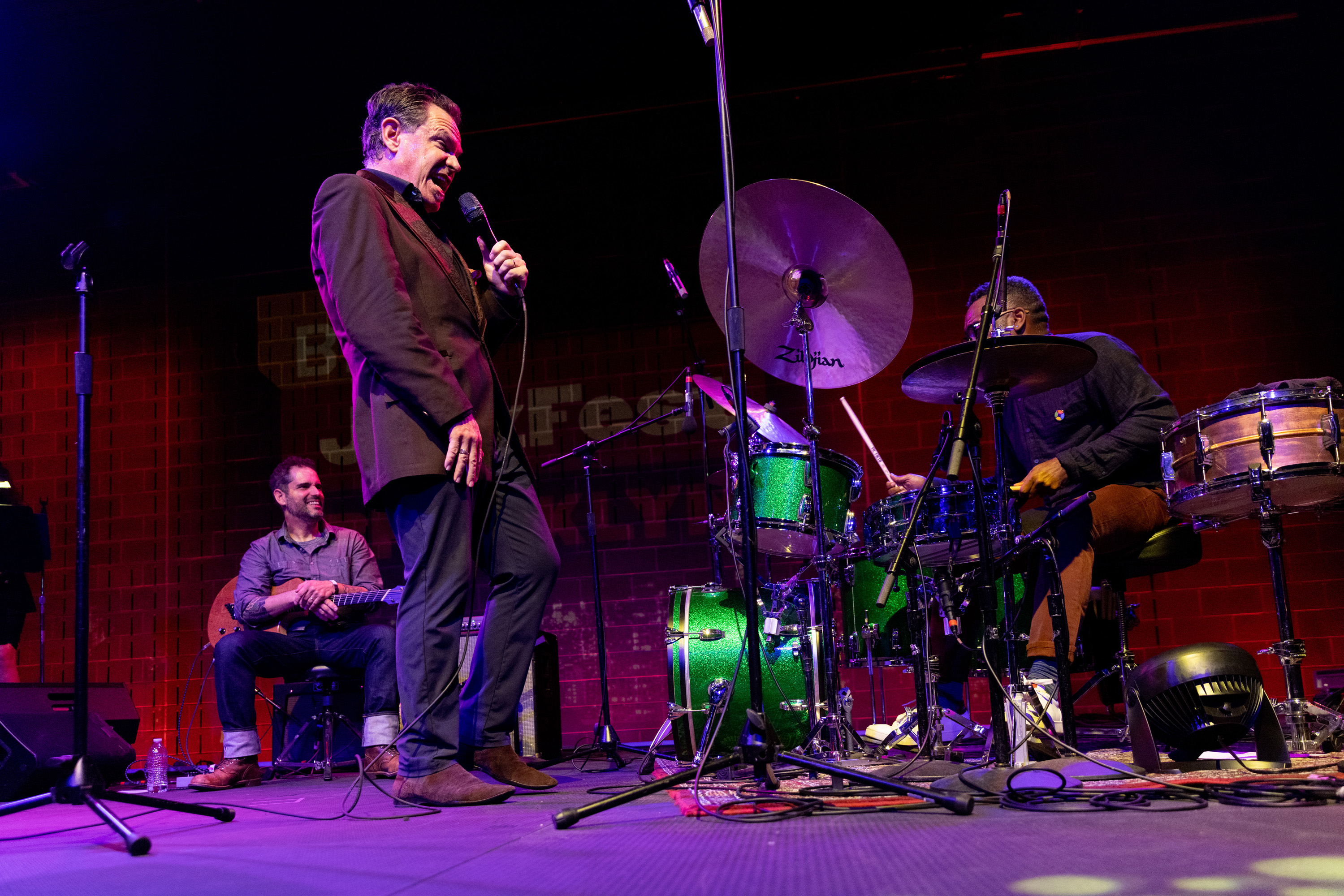 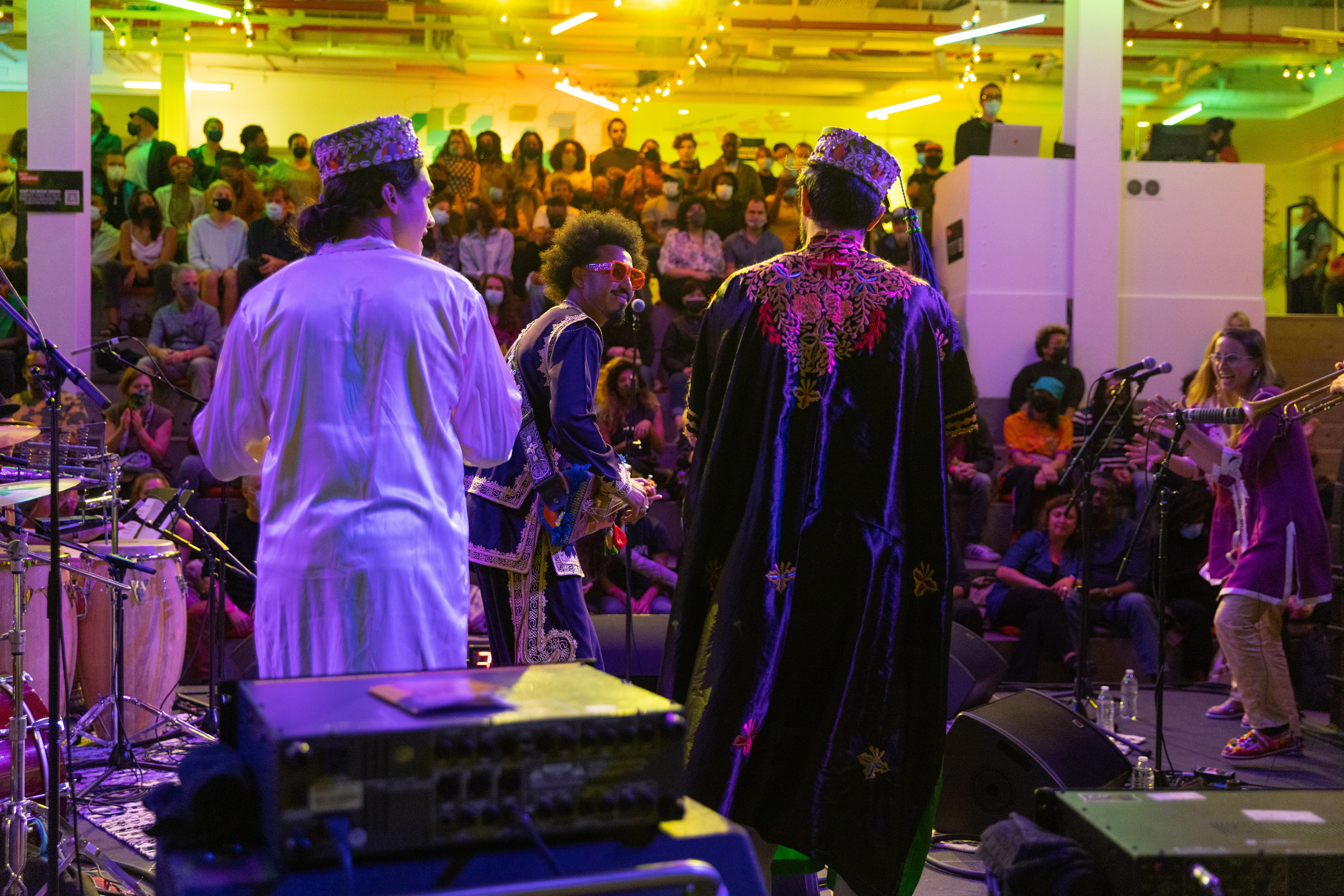 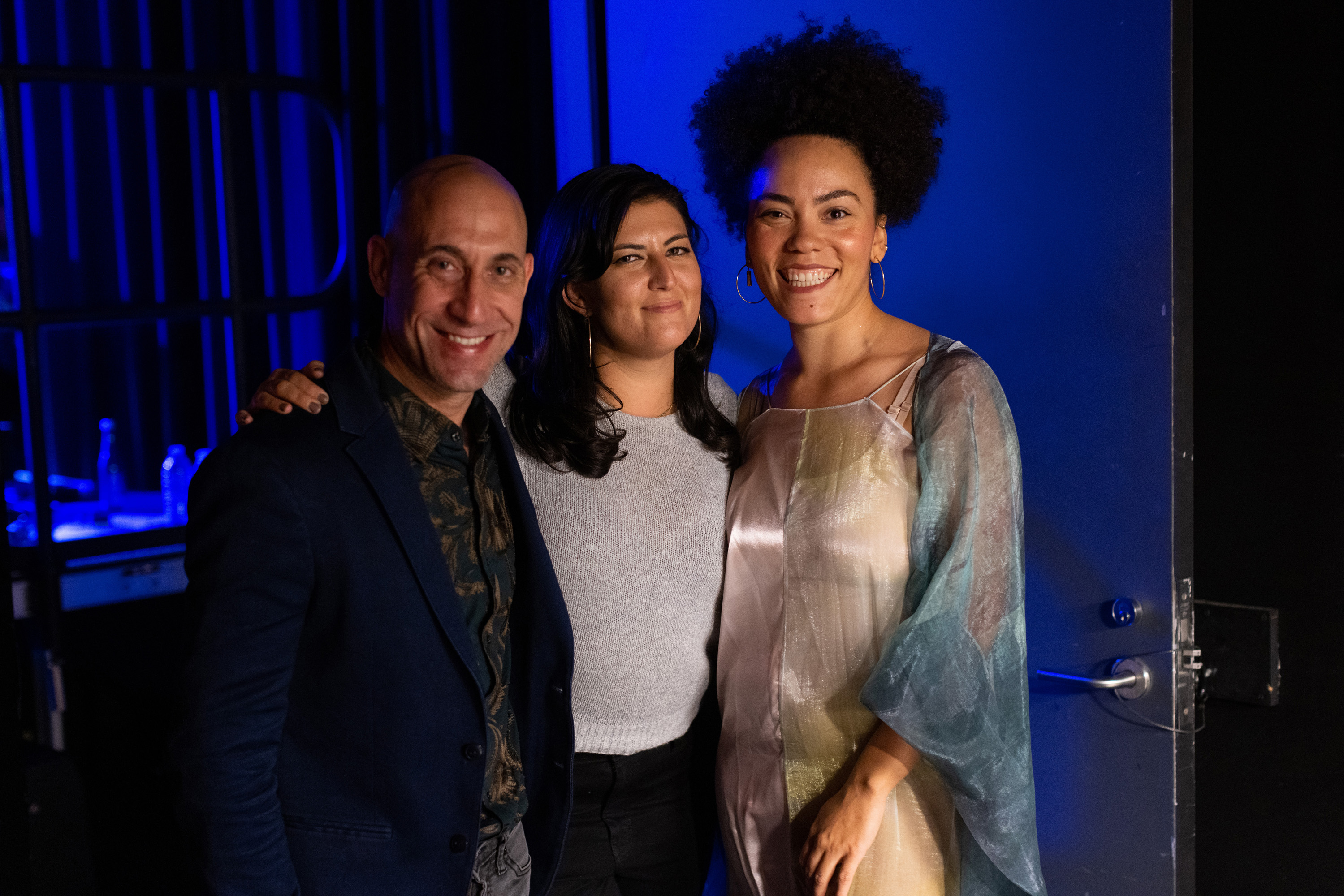 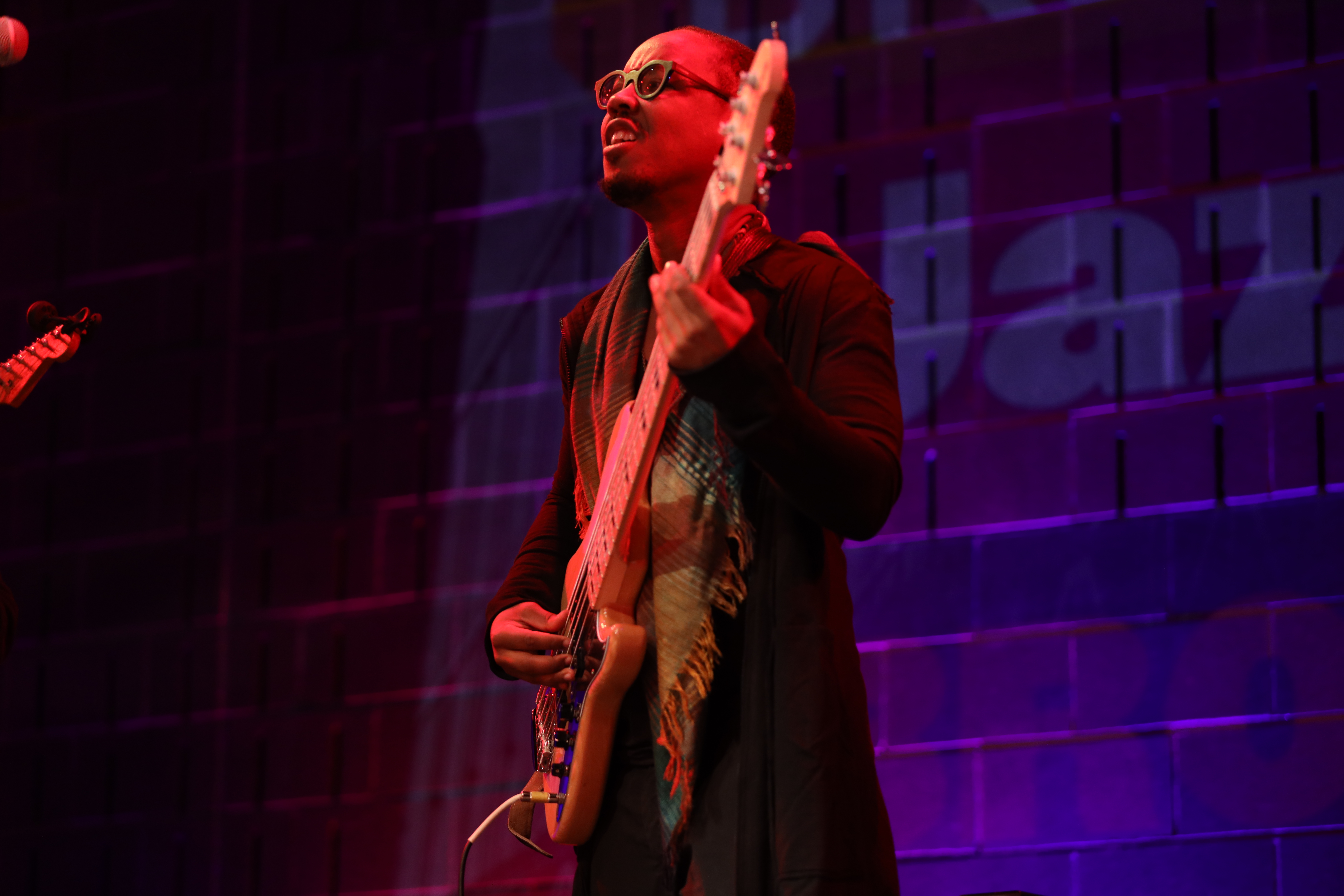 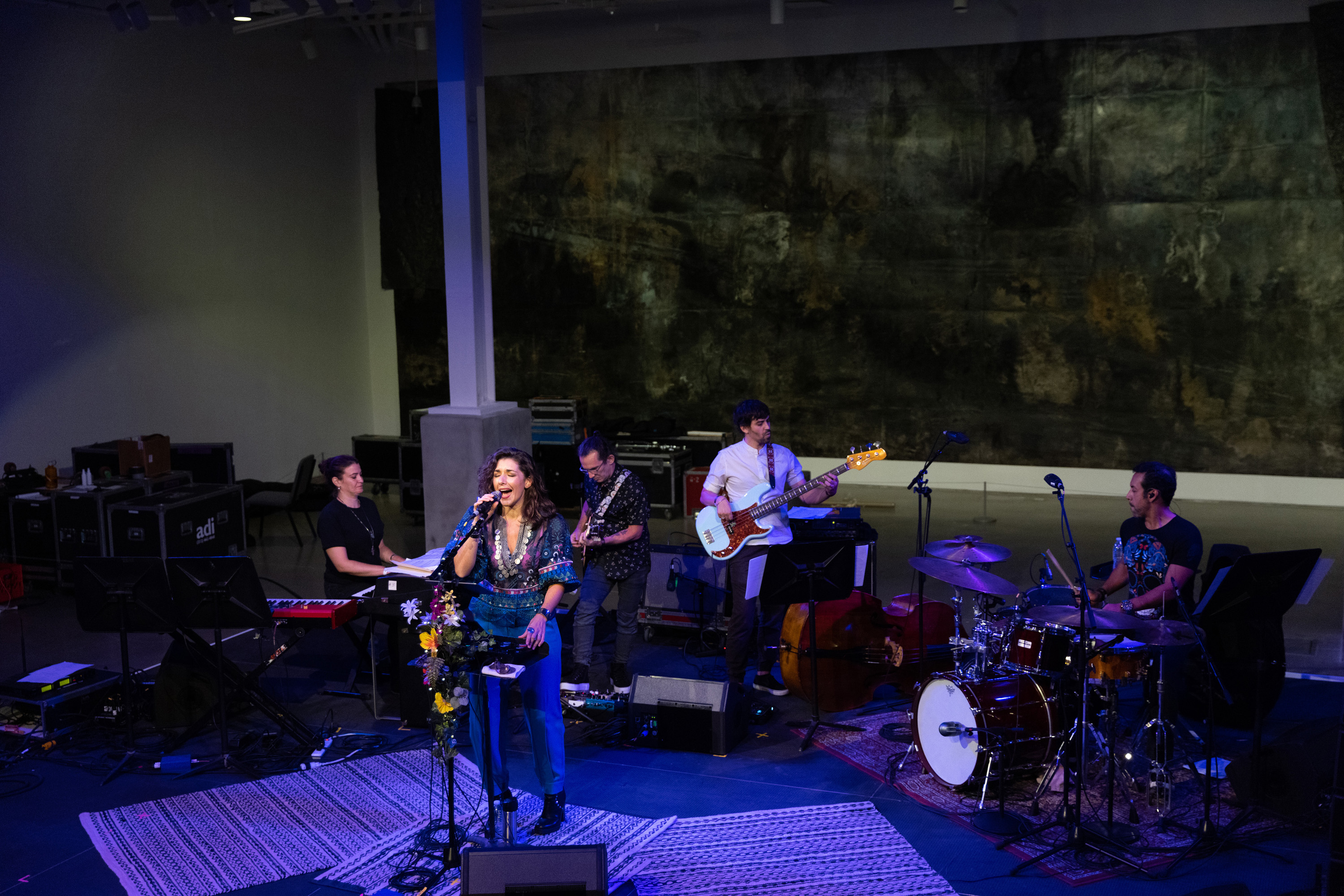 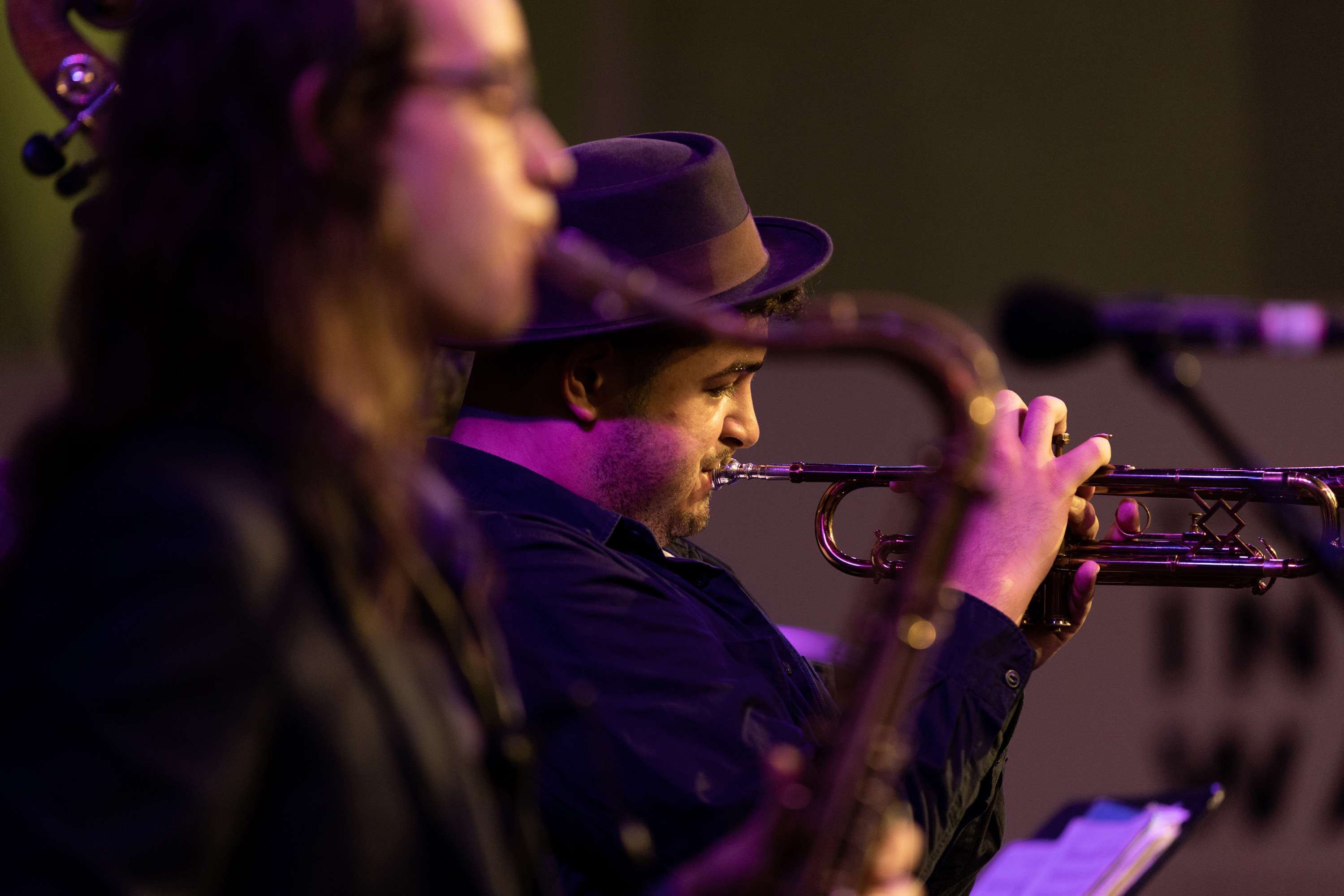 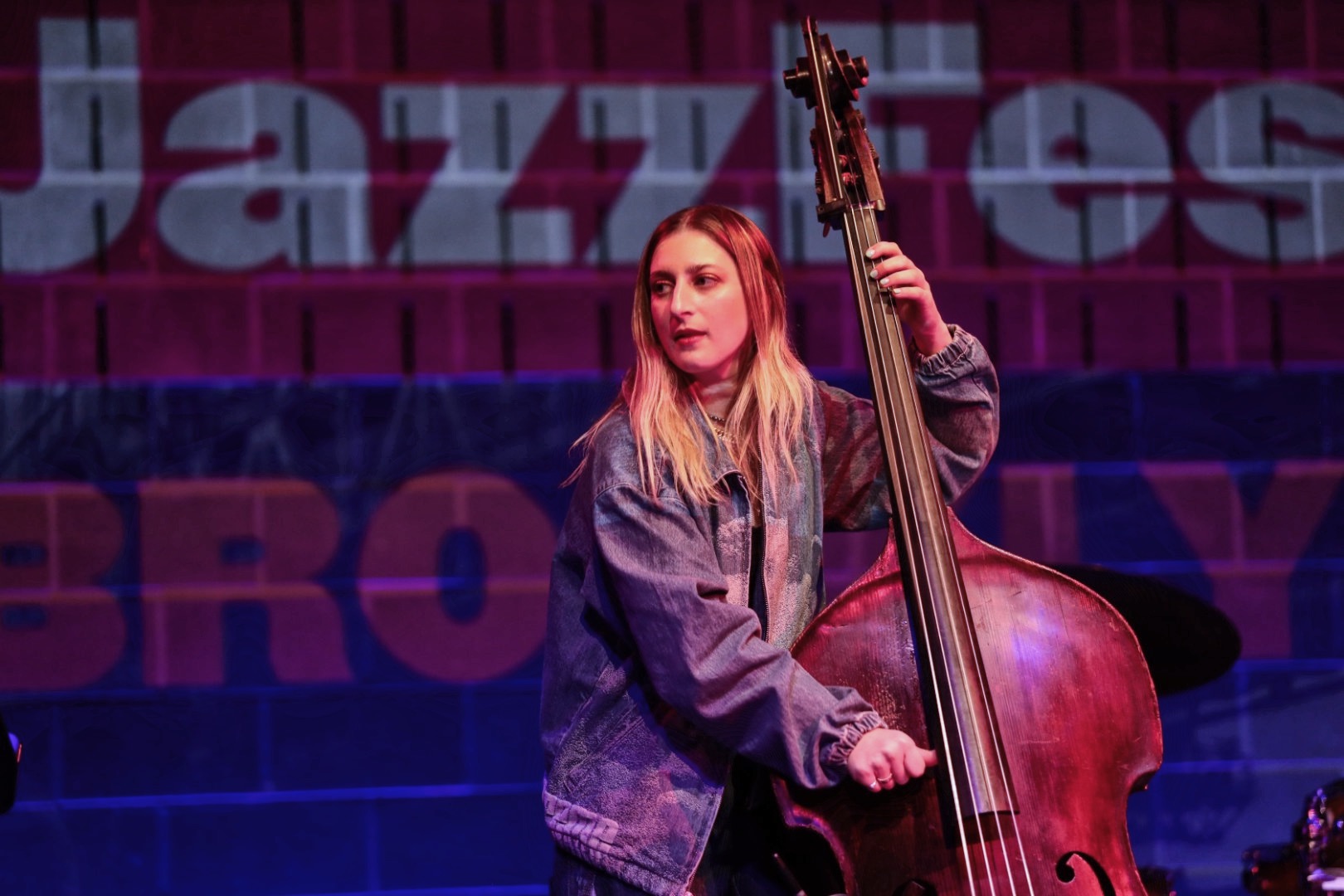 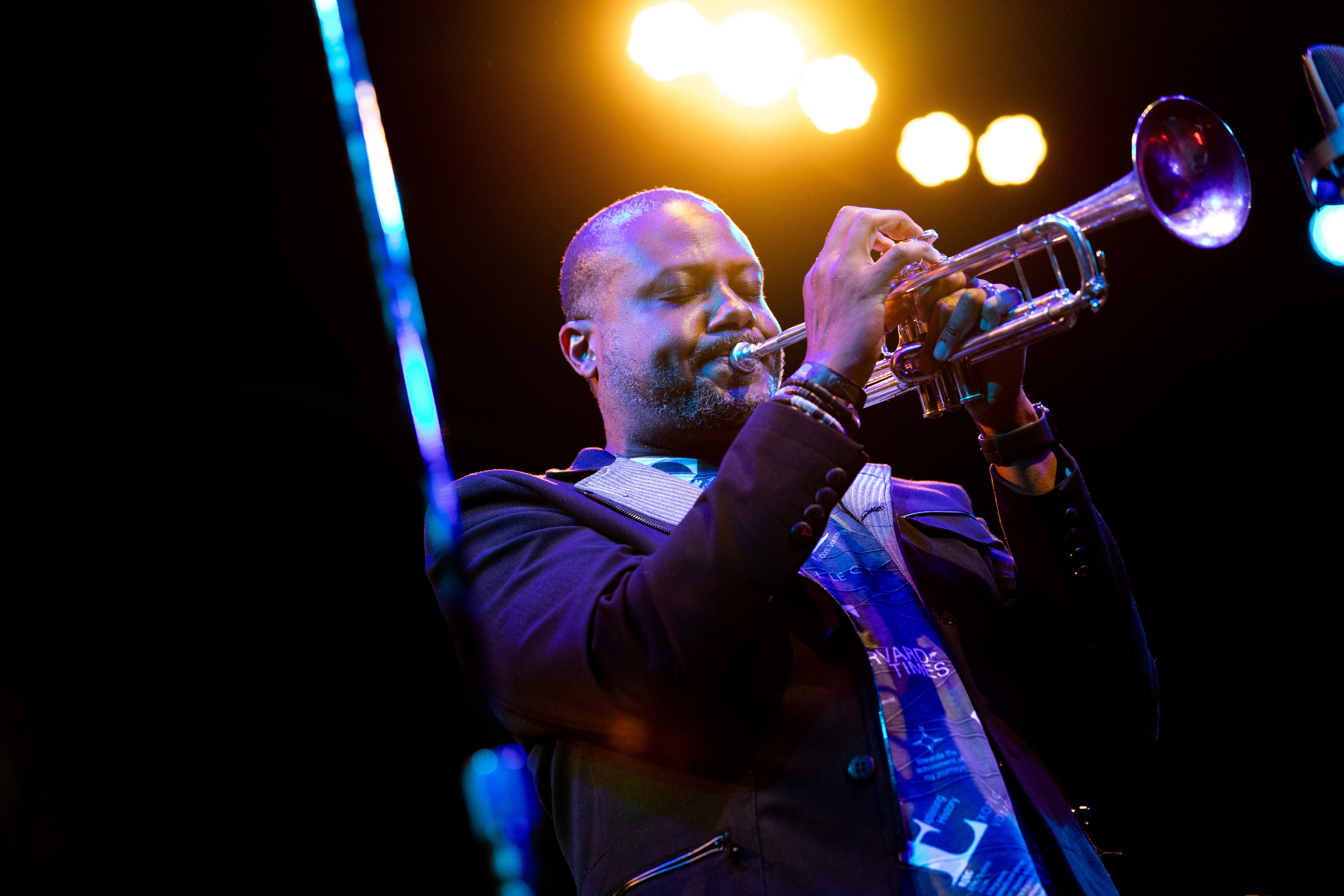 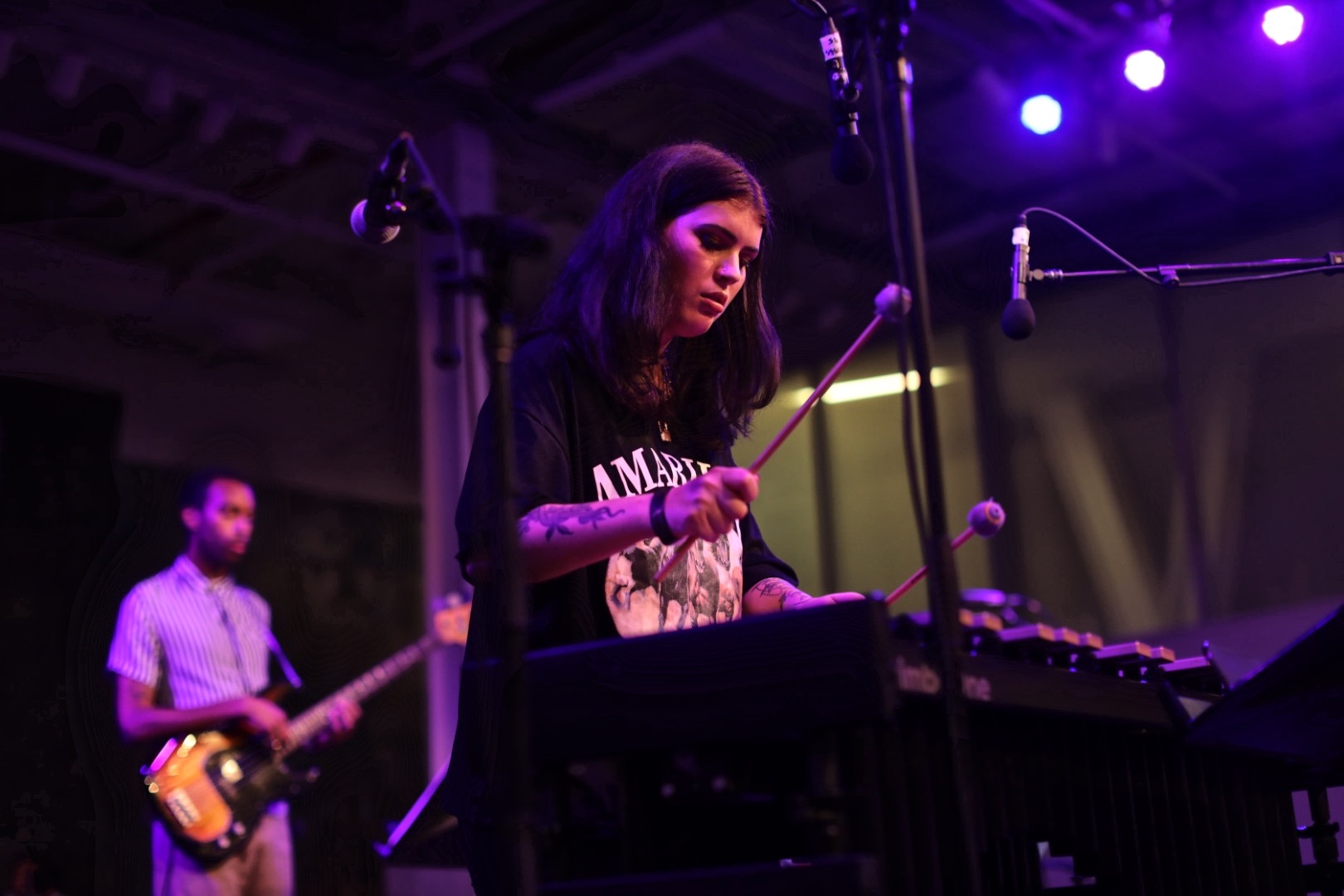 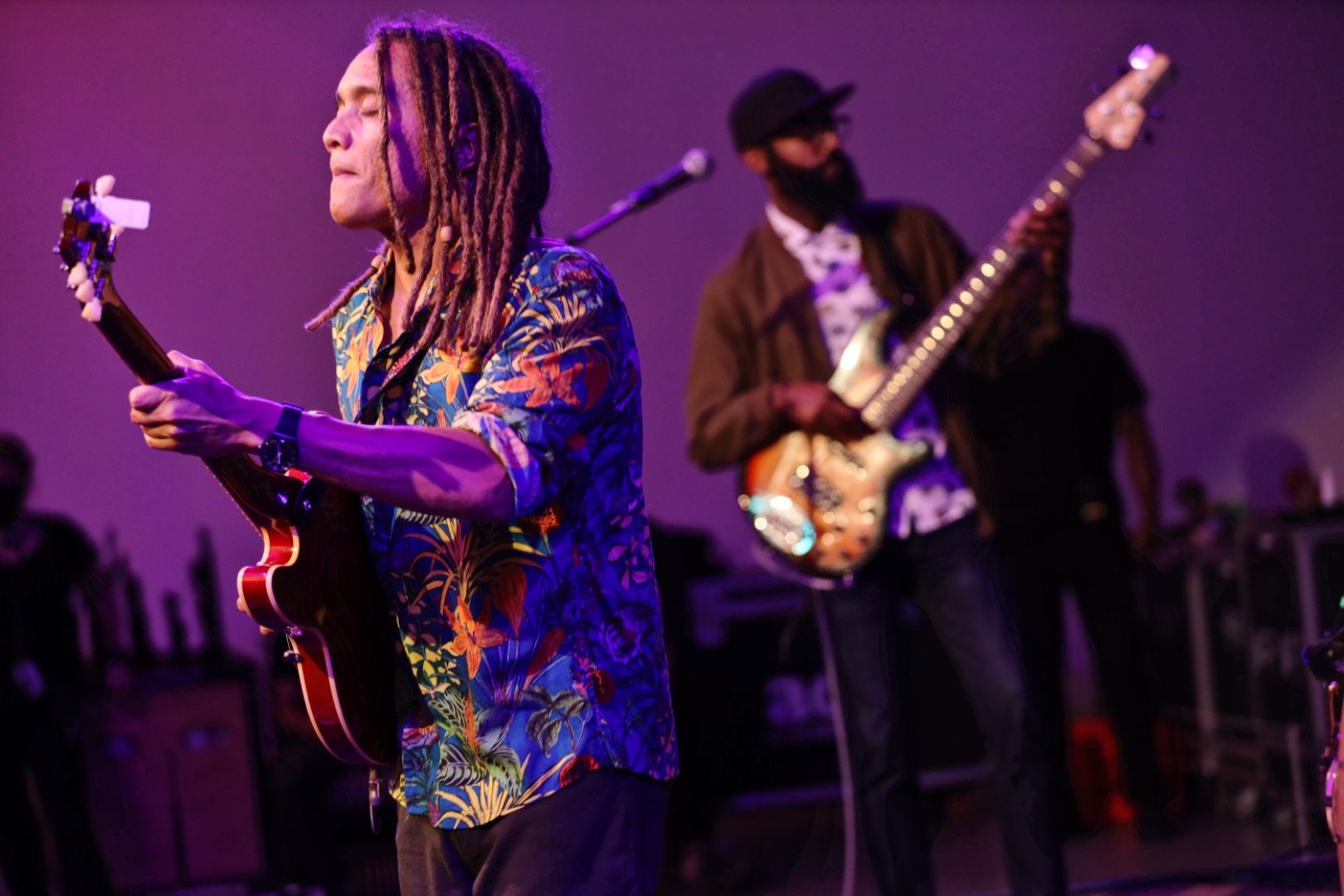 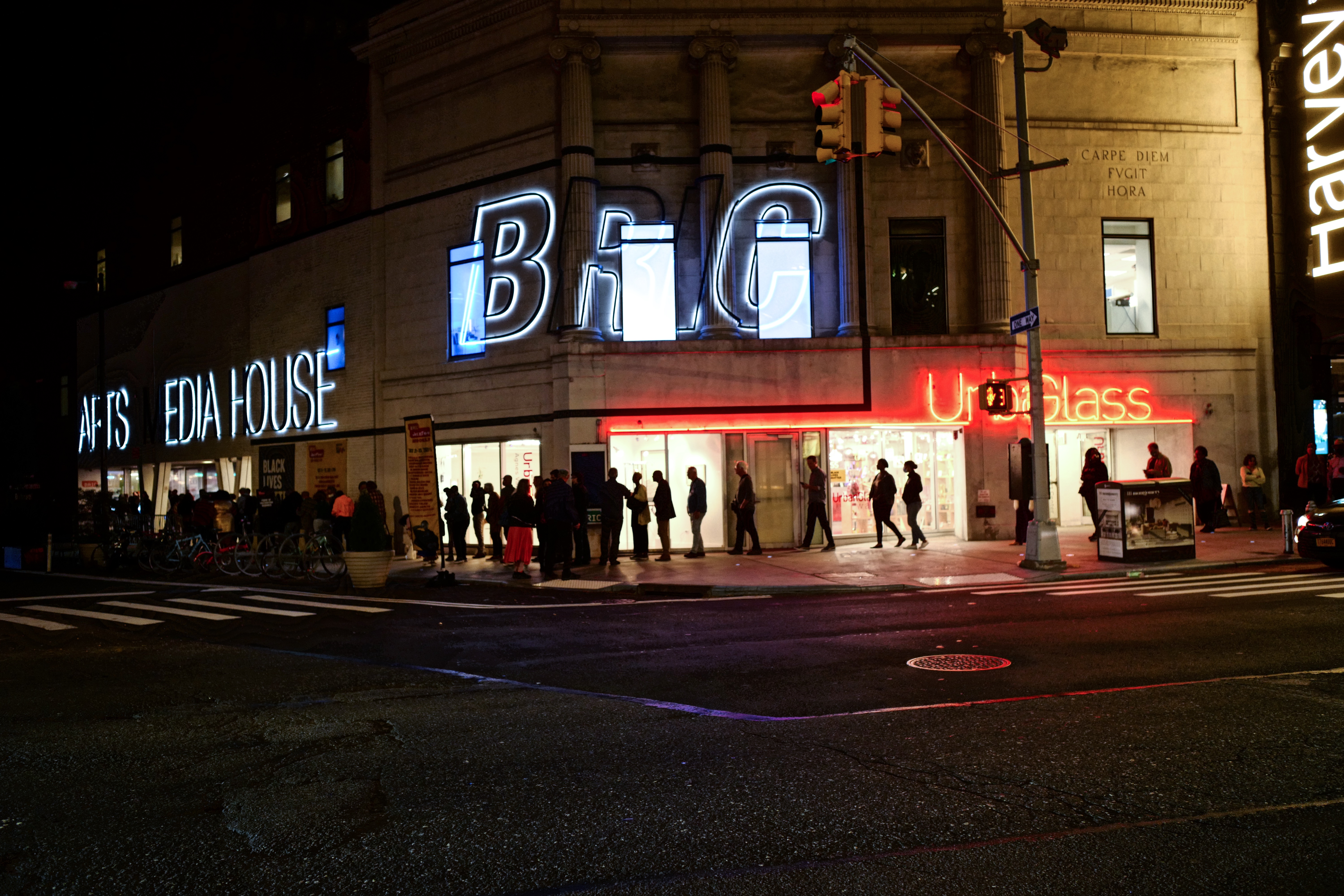 A picture of a line around the block for entry to the sold-out first night of the seventh annual BRIC JazzFest at BRIC House in Downtown Brooklyn (photo credit: Jati Lindsay)

ABOUT BRIC
BRIC is a leading arts and media institution anchored in Downtown Brooklyn whose work spans contemporary visual and performing arts, media, and civic action. For over forty years, BRIC has shaped Brooklyn's cultural and media landscape by presenting and incubating artists, creators, students, and media makers. As a creative catalyst for their community, BRIC ignites learning in people of all ages and centralizes diverse voices that take risks and drive culture forward. BRIC is building Brooklyn's creative future.