We Are At a Moment That Will Be Remembered... is a monumentally scaled mural in the Lena Horne Bandshell in Prospect Park, Brooklyn, presented by BRIC and Prospect Park Alliance in partnership with NYC Parks. A portal into an alternate future, the mural appears as if emerging from the inner rings of the Bandshell amidst a swirling, hand painted cosmos. Within it, every being — humans, insects, and goddesses alike — vibrates with color and detail,  as they witness or join in the joyful dismantling of a brick wall.  The work is inspired by the scale and narrative qualities of WPA mural projects and by Mexican muralism,  especially José Clemente Orozco’s Prometheus,  depicting the mythological figure who stole fire from the gods and gave it to humanity.

In a nod to Orozco’s Prometheus, humans light their torches with flames cupped in the hands of laughing goddesses. Flanking the portal, two guardian figures cradle armfuls of fire that emit beams of  light, illuminating the landscape and the figures in a color-shifting arch. Oliveira's allegorical composition responds to the challenges of our current times with a vision of renewal, joy, and collective care. Alluding to this renewal, high above the action,  a purple figure inside a comet streaks across the sky. This  figure,  a protagonist of Oliveira’s science-fiction creation story,  reflects the perpetual recurrence and simultaneity of past, present, and future narratives.

The mural recognizes the forms of collective action that have taken place over the past year, against violence, hate, and separation through walls. Oliveira envisions rebirth through such forms of collective action as joy and care—celebrating acts that often take place in public natural settings, like Prospect Park; a site for imagining and enacting utopia.  In this landscape, leisure and care are not seen as idle tasks but upheld as the driving force of radical change. Before the wall, figures engage equally in direct action and acts of mutual pleasure, touch, and care. In the distance, utopian queers lounge, swim, rest, and organize. These figures exist simultaneously with the liberation in the foreground; in Oliveira’s conception of utopia,  leisure and frivolity can and must coexist with direct action: milk and honey with fire and brimstone. On the horizon of the image, a volcano erupts from a vast, subterranean fire, and a burning tower and a crumbling wall signal the fall of powerful, but not indestructible hierarchies and systems of domination. 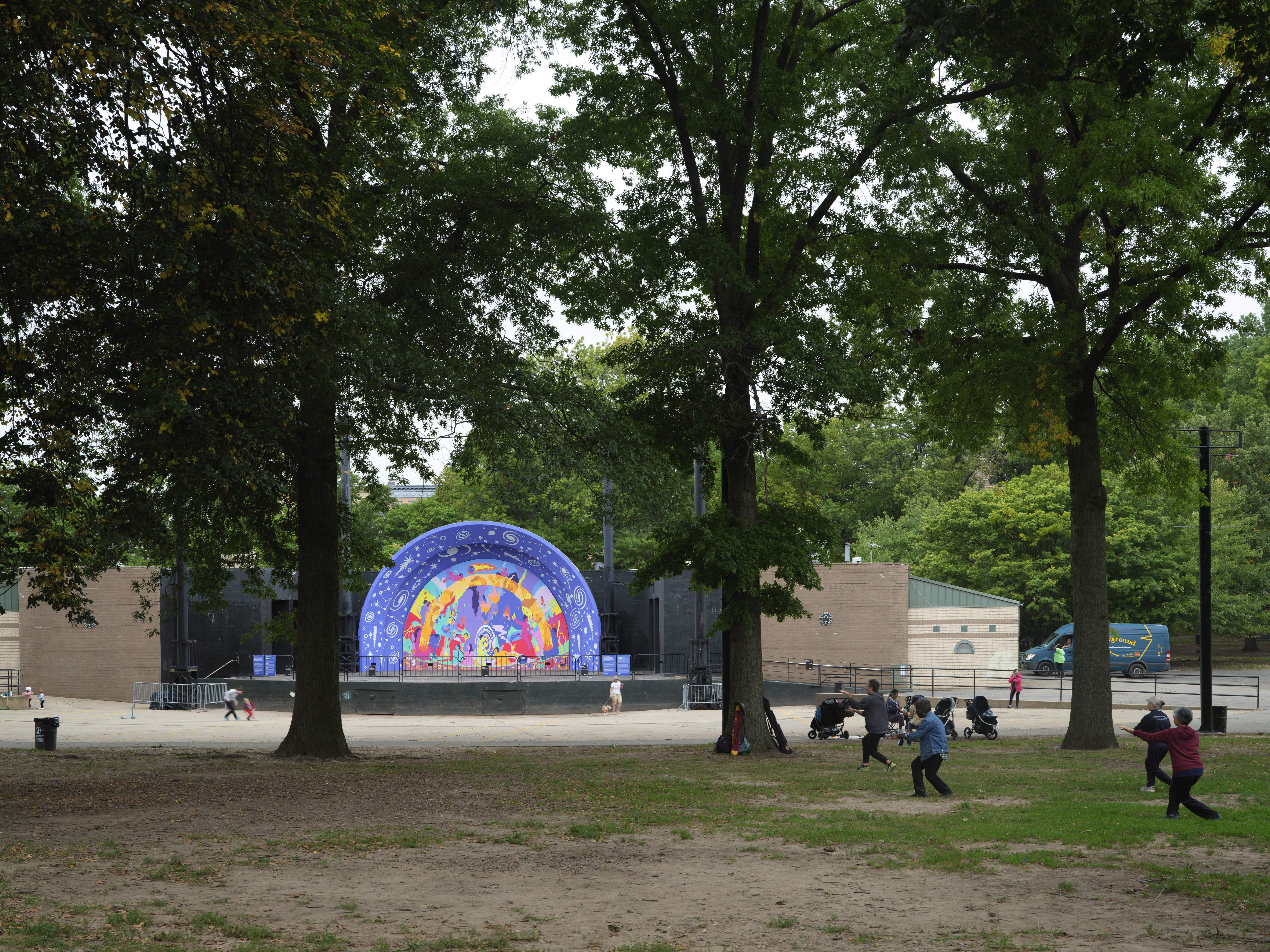 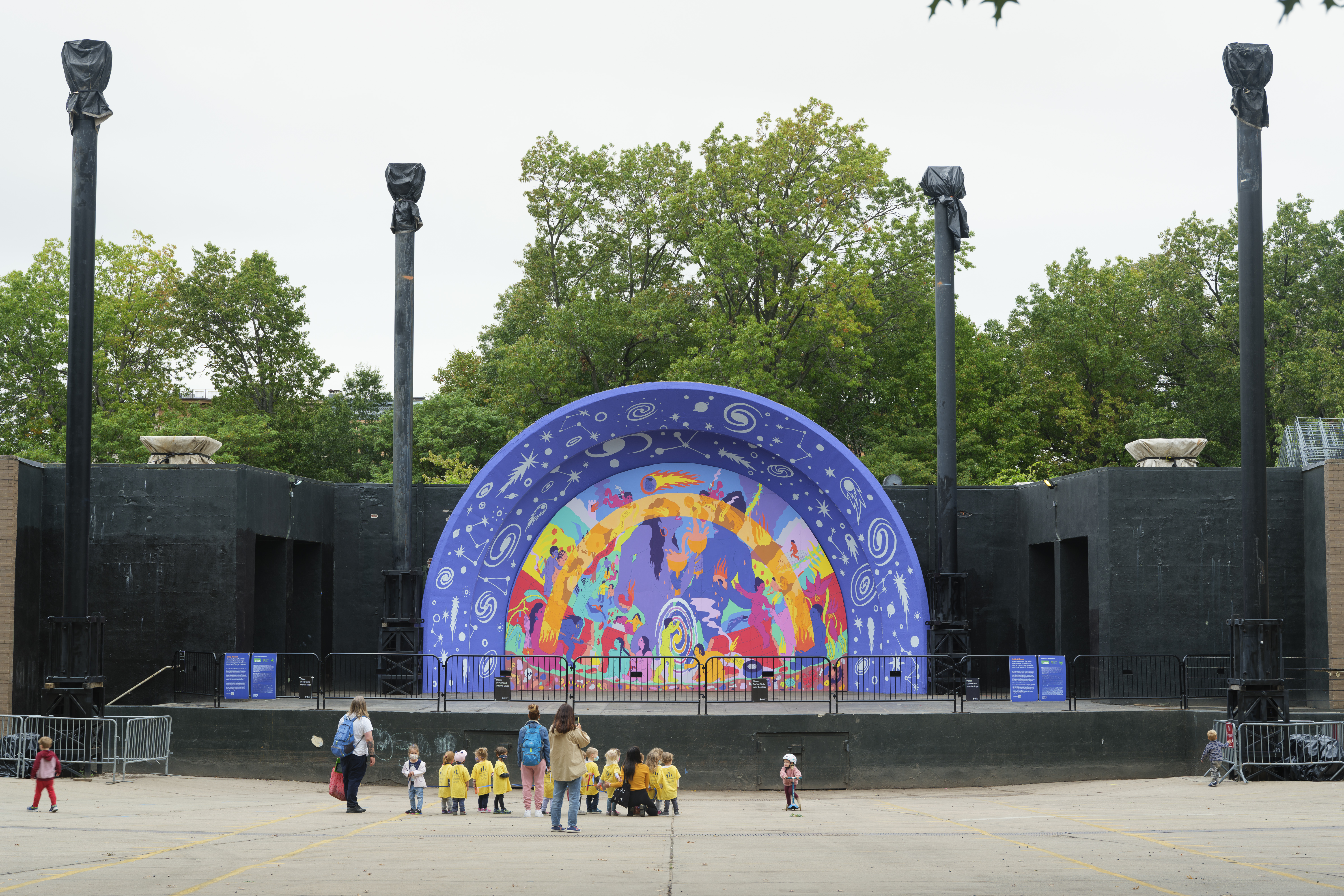 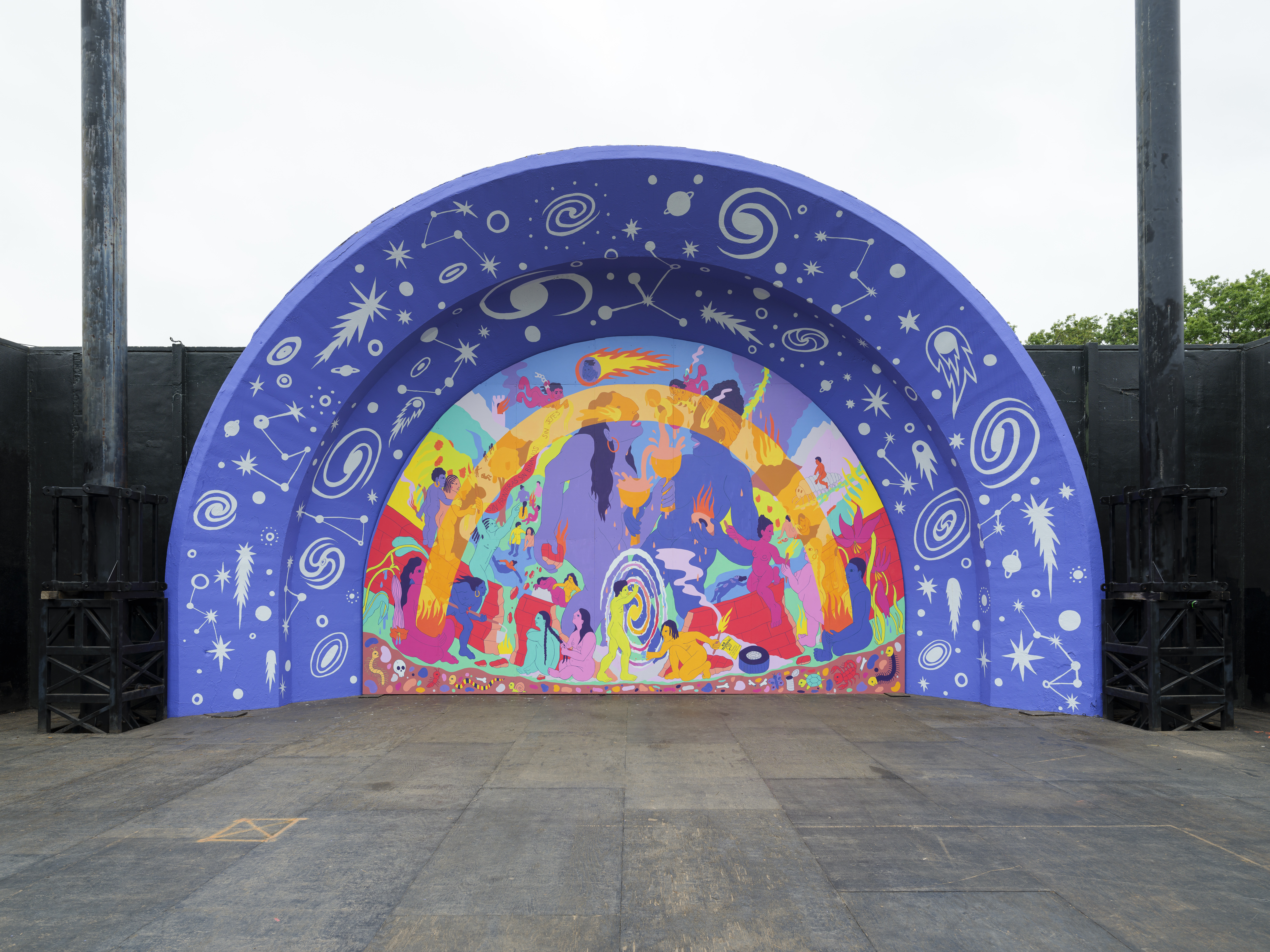 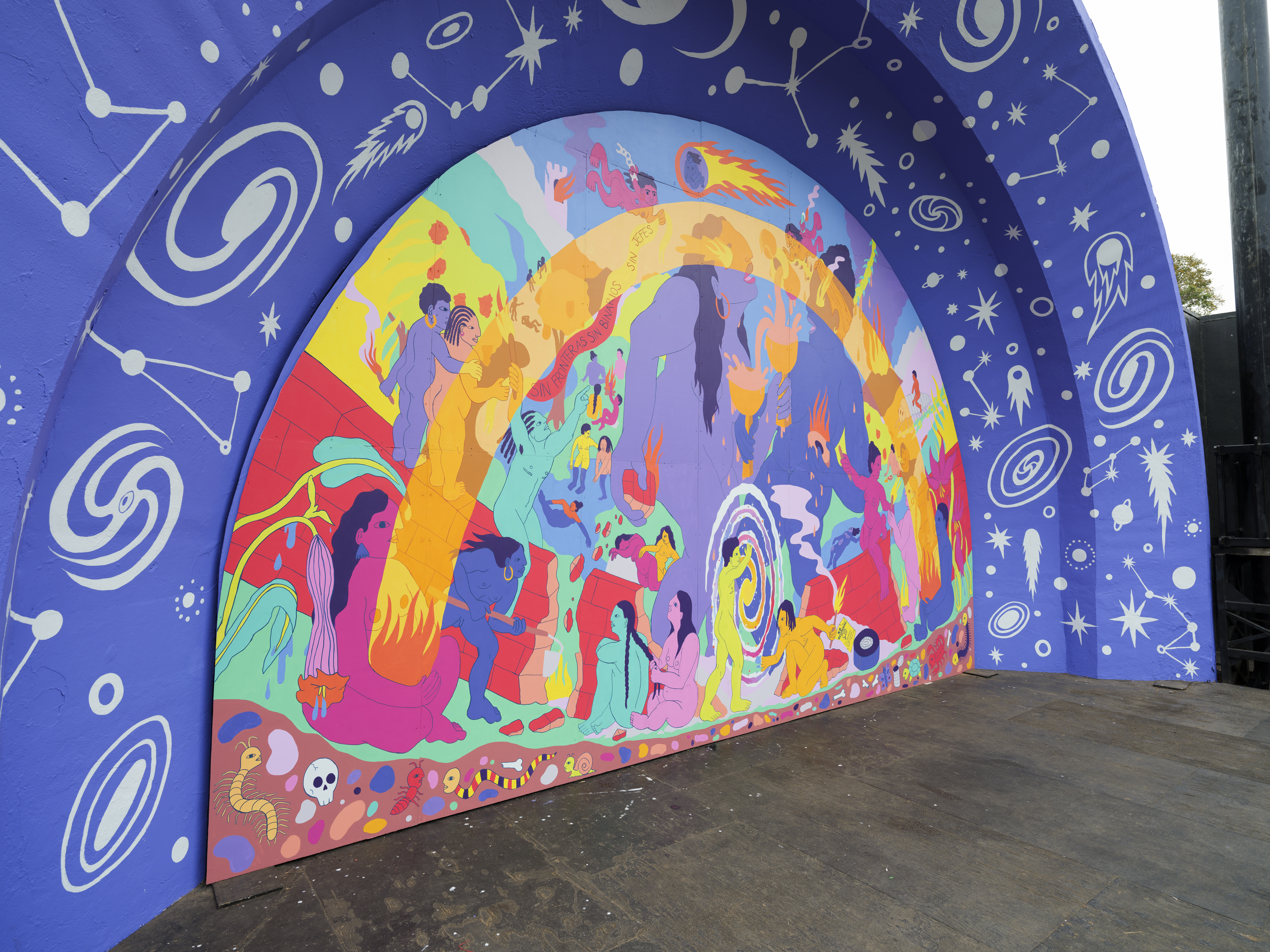 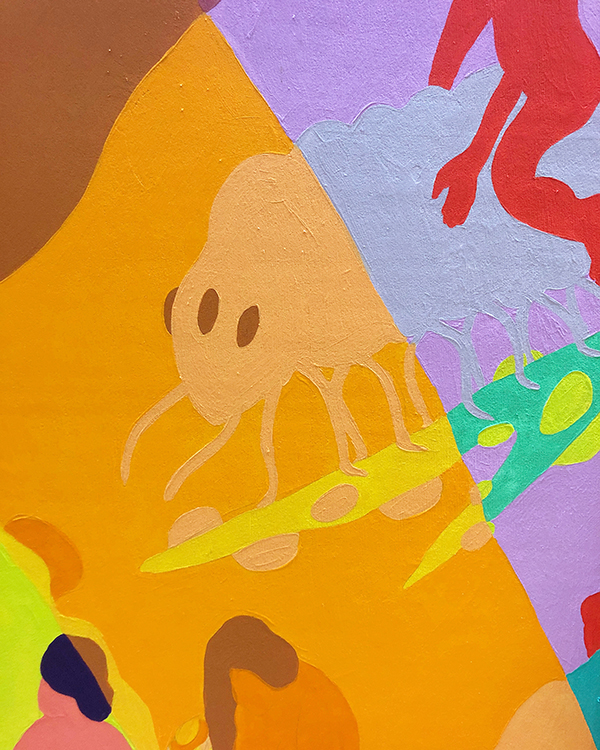 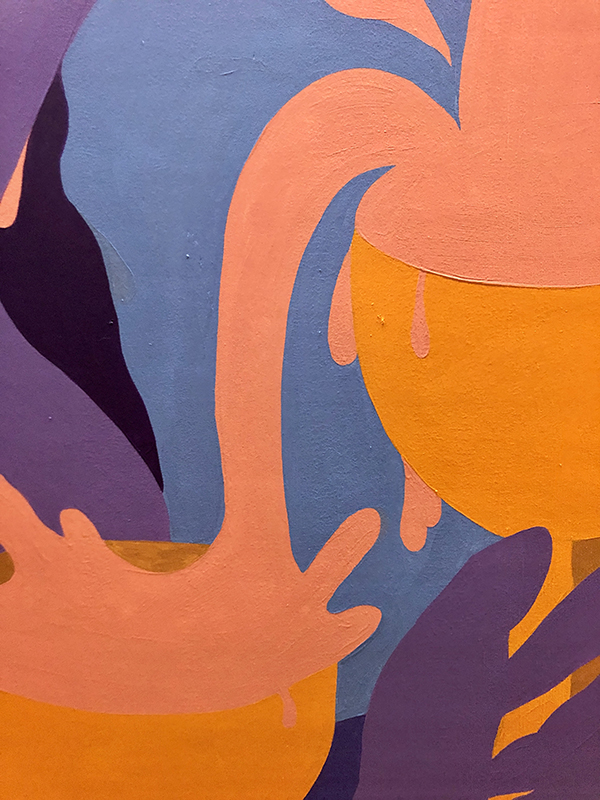 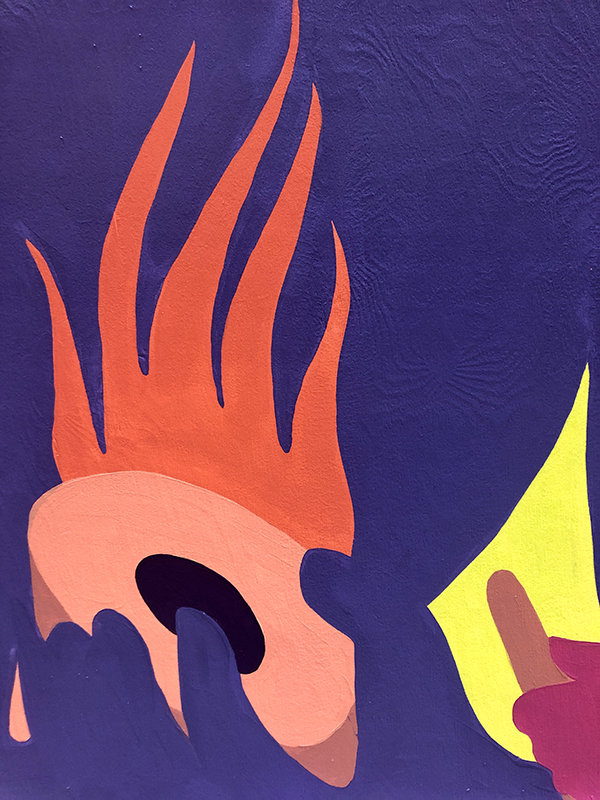 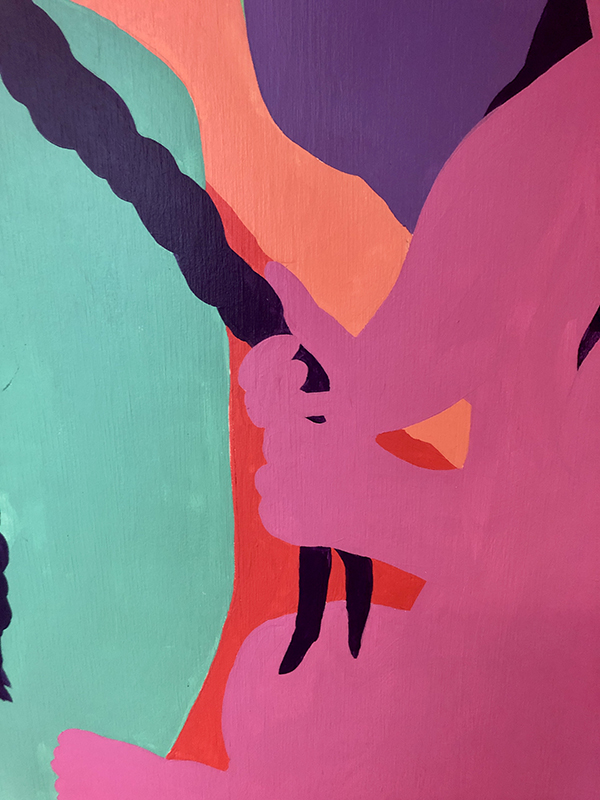 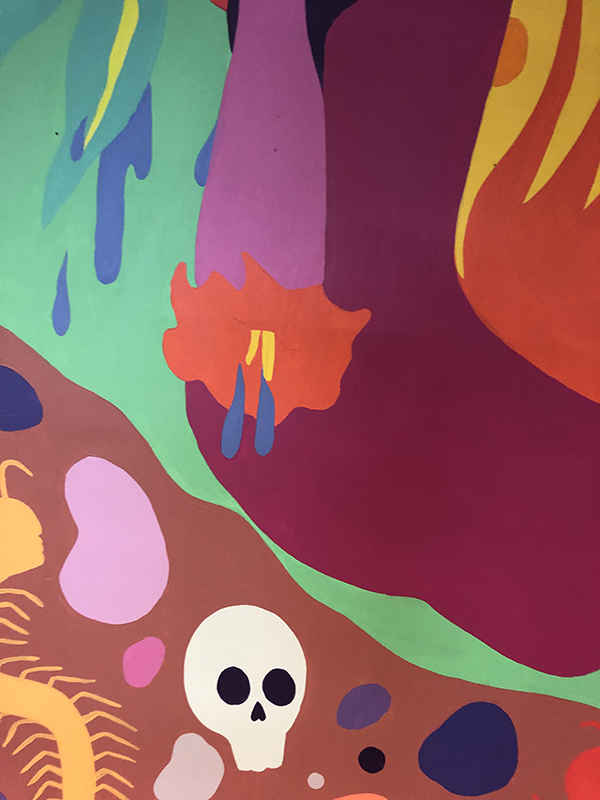 Emily Oliveira is known for her intricate textile-based work including quilting, embroidery, and rug tufting, as well as for her vibrant murals. She combines these media in immersive installations, such as in her 2021 exhibition at BRIC House, I Saw God and She Wasn’t Made of Money. Oliveira's work is rooted in queer theory and science fiction, especially the writings of  Octavia Butler and Ursula K. Le Guin — sources that embrace the potential to collectively imagine a new cultural and social fabric. She has participated in group exhibitions at CUE Art Foundation, Brooklyn Brush Studios and the Space Heater Gallery, SPRING/BREAK, and the Museum of Arts and Design, all in NY. She has been awarded residencies at BRIC, the Museum of Arts and Design, Wave Hill, Ars Nova, A.I.R Gallery, and Governors Island, all in New York, NY; Yaddo, Saratoga Springs, NY. Oliveira received her BFA from the Rhode Island School of Design and is currently an MFA candidate at Yale.

Want to learn more about Emily's previous work at BRIC? Check out this video:

Prospect Park Alliance is the non-profit organization that sustains, restores and advances Prospect Park, "Brooklyn's Backyard," in partnership with the City. The Alliance was founded in 1987 to help restore the park after a long period of deterioration and decline. Today, the Alliance provides critical staff and resources that keep the Park green and vibrant for the diverse communities that call Brooklyn home. The Alliance cares for the woodlands and natural areas, restores buildings and landscapes, creates innovative new destinations, and provides volunteer, education and recreation programs. Learn more at prospectpark.org.

For over 50 years, NYC Parks’ Art in the Parks program has brought contemporary public artworks to the city’s parks, making New York City one of the world’s largest open-air galleries. The agency has consistently fostered the creation and installation of temporary public art in parks throughout the five boroughs. Since 1967, NYC Parks has collaborated with arts organizations and artists to produce over 2,000 public artworks by 1,300 notable and emerging artists in over 200 parks. For more information about the program visit nyc.gov/parks/art.