“Beyond the 'two-ness' of double-consciousness, my awareness is multi-conscious through immigrant and gender layers, and a Caribbean identity that signifies entertainment, distraction, pleasure, paradise or fantasy to others. In addition to imperial narratives, the 'tropical' is now a kind of universal ready-made: decorative, interchangeable, disposable. Inter-disciplinarily, I explore the performativity of tropical identity as a product: the performance of labor, decoration, beauty, leisure, service, and the (female, Brown, Black) body within it all.”

Q&A Intro by Chenée Daley: Working across the mediums of painting, sculpture, performance, and photography, Joiri Minaya navigates landscapes between the global north and south, to engage with themes around the body, domesticity, and gender roles into a site of unlearning and decolonizing larger institutional systems. Born in the Dominican Republic, Minaya’s work is deeply connected to navigating projections of colonialism. In our interview, we speak about immigrant dualities, how it translates into the work of artists, her recent solo exhibition on Baxter St at the Camera Club of New York, and the difficulties of exhibiting work and garnering an online presence in a time of isolation.

CD: Tell me how your artistic practice started. What and who were your inspirations? and/or influences?

JM: I was born in New York but grew up in the Dominican Republic since I was very little, like age zero. And I came back, when I was 19 for my undergraduate work. When I was studying in the Dominican Republic, I was more concerned with gender roles in Dominican society. And I was starting to think and use pattern design in my work as a metaphor for society but more concerned with gender and the construction of the feminine from within a domestic environment. When I came to Parsons, I started working with performance, video, and installation. My ideas about gender expanded from this, from outside of this domestic construction into literally the landscape and being concerned about landscape and gender as they become intertwined around tropical identity.

CD:  As immigrants, I think we tend to think of ourselves as split between two places. It's never quite a whole person when you go home. You're not, maybe in your case, Dominican enough, or here, you're not American enough. How do you translate your work between those two places and those dualities?

JM: I think it's something that as time passes, it starts making more sense. I grew up in the DR fully, so I feel Dominican in identity. Although I was born in New York, I feel like an immigrant, even though I'm a citizen, I've always been in the middle of those dualities. But then I've been in New York for a decade so when I go back to the DR, I feel my difference is more situated as an outsider. I still pass like I was a regular person from the country, but there are things that tell people that I don't live there. I'm starting to get curious about that. But I've definitely felt more often, the other side of that as an immigrant here. I'm learning more about what are the things that make me visible as an immigrant and as someone from outside, even though I'm pretty much indoctrinated in US culture just by the media. Even growing up in the DR, the things that you consume are very influenced by US culture.

CD: As immigrants we become closer to our home country's identity when we move away. 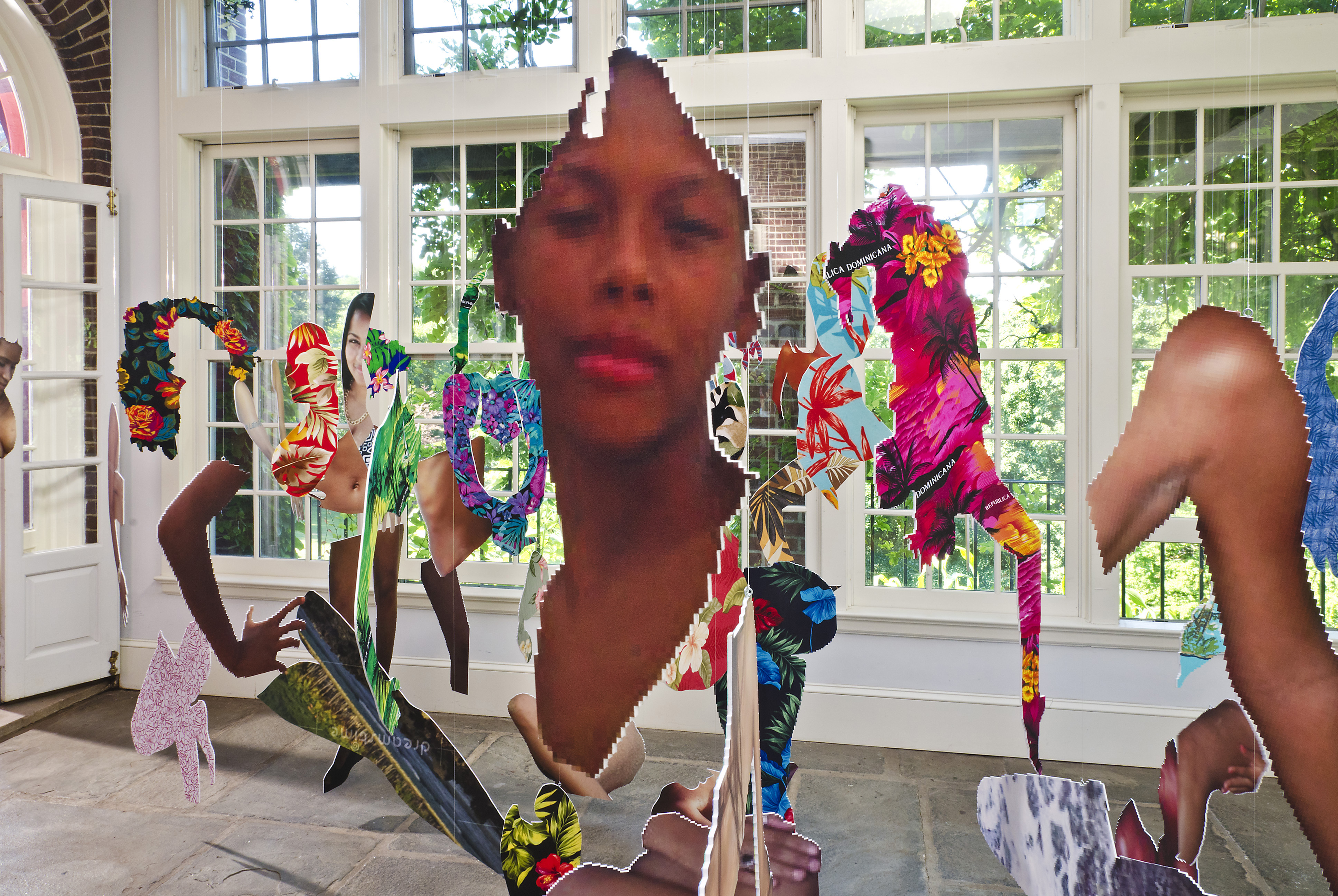 JM: I've definitely seen that and the Dominican diaspora here is very present, and they use signifiers that are also interesting to think about, because they are kind of dated sometimes, like stuck in the 1980s or ‘90s, especially in particular moments where there were waves of immigration and, and that's super interesting.

CD: When we move away from a place we're always searching for certain motifs and symbols because we're so far away from it. We try to be closer to it in a more conceptual or idealistic space. I just wanted to know if you feel to be more focused on the concept of home, being away.

JM: In my work, I'm more interested in the construction of that space in the global north imaginary because of the experience of being here and it being constantly projected. It’s not that I'm seeking to create this space of memory for myself as an immigrant here, but more that I'm dealing with these projections and trying to construct them.

CD: What are you thinking about right now, creatively?

JM: Deadlines. I have work that I need to get done by a certain time, just figuring that out in the middle of the pandemic, which is like a thing, but I just got out from a meeting with a museum in the DR. Not much I can talk about right now because they are very secretive but it's a part of their thing. That's what's been mostly concerning me in the studio, figuring out what, if I can cover this thing and all of the plan, B, C, D scenarios.

I also just had an exhibition at Camera Club in September, that came down already. And the exhibition was about a body of work that had been developing for a while since like 2015, called Containers. I made some collages that dealt with other imagery that speaks to the process of developing that series. I want to have more time to go back to those works and keep unpacking some of the references and source imagery that I collected. And also some ideas that were generated from just having everything in the same space and speaking to each other.

CD: What does the Colene Brown Art Prize mean for you?

JM: It’s really great to be recognized and awarded, and especially in this moment where we have all of these issues arising from COVID not only the health issues, but all of the others; infrastructure and everything everyone's dealing with in their own careers and circles. Coming from the experience of just having had a solo show, it's very tricky to have an exhibition right now. The appointment system for visitors, the limitations of people going into the space, and all the extra work that you have to do to translate to an online presence. It's very tiring and it’s amazing to have extra support at this time. So I feel like in the context of the pandemic, a prize is like an even greater, an even bigger deal than it would have been in the regular circumstances.

Listen to the full interview:

BACK TO JOIRI MINAYAS' WORK >>