This past summer, BRIC was pleased to have eight artists in residence, as part of our expanded BRICworkspace residency program. One of those artists was Nicole Awai, whose studio was located at our satelitte residency space at 505 State Street. Awai is a Brooklyn-based multimedia artist whose work focuses on materiality and the way in which place and material is interconnected. She uses traditional and non-conventional materials in her work, including nail polish, glitter and found objects. Awai earned her Master’s degree from the University of South Florida. Her work has been exhibited at Lesley Heller Workspace, FiveMyles, The Vilcek Foundation, PS1 MoMA, the Brooklyn Museum, and the Queens Museum, among others. Awai received the Joan Mitchell Foundation Painters and Sculptors Grant in 2011 and an Art Matters Grant in 2012. BRIC Curatorial Fellow, Ximena Kilroe sat down with Awai to talk about her work.

Ximena Kilroe: Thank you for taking the time to speak with me. I was hoping we could start with you speaking a little bit about your practice, to help introduce you to our readers who may not be familiar with your work.

Nicole Awai (NA): I am a multimedia artist with my focus originating in painting. I am what may be called an "expansive painter" and that just simply means that I don’t think there are these fixed material limitations on painting, and often my work is coincidentally three-dimensional at times. But it comes from painting.

XK: From reading about your work, it is often described as being concerned with identity or identity politics. Do you see your work this way?

NA: No. I mean it's interesting, I don’t know why people always think it's that. I’ve been doing work for years that has been about materials. I don’t know if it’s identity or identity politics, I think I’m interested in the connection between us and the material reality of the world, and way place and material is interconnected.

Peripherally... I mean, we are all affected by our personal experiences, yes. All artists are! I think there’s a tendency to want to think, especially for women and people of color, that what they’re doing is “identity politics” more than everybody else. But we all mine our histories and come to our understanding of the world through those histories.

XK: Yeah, I definitely agree with your observation that all artists mine their histories in some way. Would you say that you’re adverse to this sort of labeling in general?

NA: I think that labeling shuts down other aspects that are internal to the work. You know, I’m very interested in materials, and that’s one thing. I have a long history of engagement with abstraction as well, that gets sidelined, and ideas around abstraction so that, even just conceptually, that doesn’t necessarily come out of what people think of a ‘pedestrian’ sort of abstraction. But all those things I think get minimized and sidelined by identity.

I’m a contemporary artist who comes originally from the Caribbean. But I’m not making work that is about the Caribbean or about that specifically. And I think the proof is in the pudding. 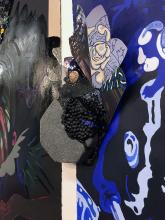 XK: Well, thank you for clarifying that. I think that’s a really interesting and important point to make. I’ve noticed there is this black material in a lot of your work. Can you speak to me a little bit about what it is?

NA: Everything you’ve seen probably has this material in it. There’s always been this oozing materiality in the work, for many, many years, starting around 2000 to 2001. At first it was in other colors besides black. At first it was in red, white and blue. So there’s always been political undertones in things for me, for sure. Especially in the Americas, you know, red, white and blue for Americans might bring to mind certain references, but it’s also the British flag, Cuban flag . . . everyone’s histories are in those colors. But it was around that time that this oozing materiality came into the work and was persistent. It was really persistent and went beyond those colors and was sort of just there. It was around 2008 that it became black.

XK: What was the reason for that change, if you can pinpoint one?

NA: I think initially, as artists, we work on an intuitive level. For me, I think, intuitively there is something subconsciously and conceptually correct there. It just felt and feels right, like what I’ve been trying to say. As things develop you just come into an understanding of why that was correct. I started to realize that oozing materiality being black encompassed these ideas of a coalescing around materiality anyways.

It’s always been there I guess, but I was trying to visually articulate what I see as the inextricable union of materiality and narrative. And it’s funny because maybe at some point in time, we’re going to prove that that’s coded in our DNA, you know, I mean all our history and the narrative is in the materiality of the world, of the ground under our feet. What we come from and go back to, it’s almost like we’re just sort of reconstituting ourselves constantly.  So therefore what is the separation between me and the materials that I’m making with? What is the separation between me and the art I’m making?

It has a tangibility to it but it’s also encoded on this molecular level. So I think our histories, our communities, our politics, our policies, I think all of that is wrapped up in this materiality and time. On a very surface level, the black oozing materiality connotes things like oil which is literally millions of years of us compressed, basically.

A couple of years ago I got this Art Matters Grant to go back to Trinidad to investigate possible locations that could be influences. In Trinidad there’s the La Brea Pitch Lake, which are tar pits, and what I experience in that space is very much this idea of time and materiality. I’m not making work about those spaces particularly, but I think what I did experience there was exactly what I was thinking about in the way that material is connected to us, who we are, what we’re thinking about, what we’ve done in history and it even holds onto that and has memory of that history. So that materiality is embedded with narrative and our history.

XK: That’s really interesting, and I think you’ve articulated how materiality is a more apropos way of entering or thinking about your work. I’m now thinking that labeling it “identity” or “identity politics” is a very surface and almost reductive sort of reading of what you’re trying to get at.

NA: I’ve always made works with layers of meaning. I just can’t help it. You can read it on the surface but I’m hoping that you can take it further and further.

For years I’ve used nail polish in my work, . . . for almost 15 years now. And I see, even with that, because I evolve with the materials I use as well, the way that evolves conceptually. When I started using it initially, I was making these drawings where I was really playing with this idea of how we are led by familiarity and canon. Once we see certain things, codes, signs, we think we know. So I was using the language of technical drawing, which we think we know how to read, as a misdirection to redirect the gaze in a different way. Initially when I first started using the nail polish, I was using it as a sort of map legend that I called the Sensation Code. What I found interesting was the names of the nail polish colors, how they evolved. So instead of Coral Red or Autumn Red, the names began to speak about what is going on in metropolitan urban American spaces that talk about both life in the Americas and movement of people. So over the years, moving from Autumn Red to something like Mi Papí is like … hello!

And it also speaks about how we consume pop culture, even in a generational way. There was a piece I made and I took the name from an OPI nail polish called “I Vant To Be A Lone Star.” Here’s the thing I loved about it: somebody younger might just think the “A Lone Star” might refer to Texas or a sort of focus on self in terms of celebrity, but then on the other hand someone older would associate “I Vant” with older Hollywood and Marlene Dietrich, who represents another immigrant experience and the politics of that European immigrant moment. So just in that one name there’s so much.

XK: Wow! I never would have thought to closely read nail polish colors. I’ve always kind of noticed the references in them, but have never considered them in this way.

XK: Did you want people to use these names as a way of entering your work?

NA: I’m always trying to give people ways to, I guess let down their guard and step in or think they’re stepping in. We are these creatures of habit and familiarity. We’re looking for things we think we know. So I want to grab you and get you in there, and hopefully hold you so you start realizing “oh, maybe I don’t know” or “this isn’t what I expected” or “I’m getting something I wasn’t expecting”. I’ve done that with these mis-directions, and with trying to resituate the gaze as opposed to the known ways of looking, seeing, it only seems familiar.

I’m not against folks who try to show the breadth of diversity of experiences through situating the bodies seen as diverse in their work. But I don’t think that’s the only way to get people to understand or connect. It’s not just a diversity of others that I’m trying to get people to realize, but the diversity in all of us and that we all are connected.  All our histories connect, especially in the Americas.

XK: Can you speak to me a little bit about what you’ve been working on during your residency?

NA: So these drawings are part of a series. I did two a couple of years ago and put them away for a while, and as I was here these other two came to me. The series is called No Escape (Hatch). I’m looking at this book that talks about 50 islands in the world that you’ll never visit or know about because they’re not accessible or are being used for research, but when you really read their histories, some of their colonial histories are still ongoing and problematic. I use them as a jumping off point to examine how we are on this political, economical and ecological island. The ooze in these is physically the manifestation of that but also speaking about the totality, conceptually, that we’ve created this ‘no way out’. It’s happening, it’s oozing slowly. Is it going to encompass everything?

XK: But either way it’s there.

NA: It’s there, and it’s coming in, it’s sealing off. Where are we situated in that? In most of these you can’t really tell what’s really up or what’s really down, because that’s the situation.