Aruni Dharmakirthi is an interdisapinlnary artist whose work is inspired by their Sir Lankan and western culture. As a BRICworkspace Artist-in-Residence fellow Dharmakirthi uses the mediums of digital animation and fibers, manipulating family photographs, sourced imagery, and fabric, to make digital and handmade collages. Their work has been featured internationally in exhibitions conveying  ideas of memory, place, and identity, centering around the effects of colonization on immigrants who choose to leave their native country.

How does your cultural background influence your art?

Much of my work deals with aspects of Sri Lankan and Western culture. My color pallet is inspired by Indian clothing and Bollywood films which has an influence in Sri Lanka. And I often utilize figures and narratives from Hindu, Buddhist and catholic mythology as inspiration. As an immigrant who grew up primarily in America, I feel that my work is a fusing of both a Sri Lankan and western culture.

I also utilize the aesthetics of the internet which has its own culture.

Do you have a process for creating new work? 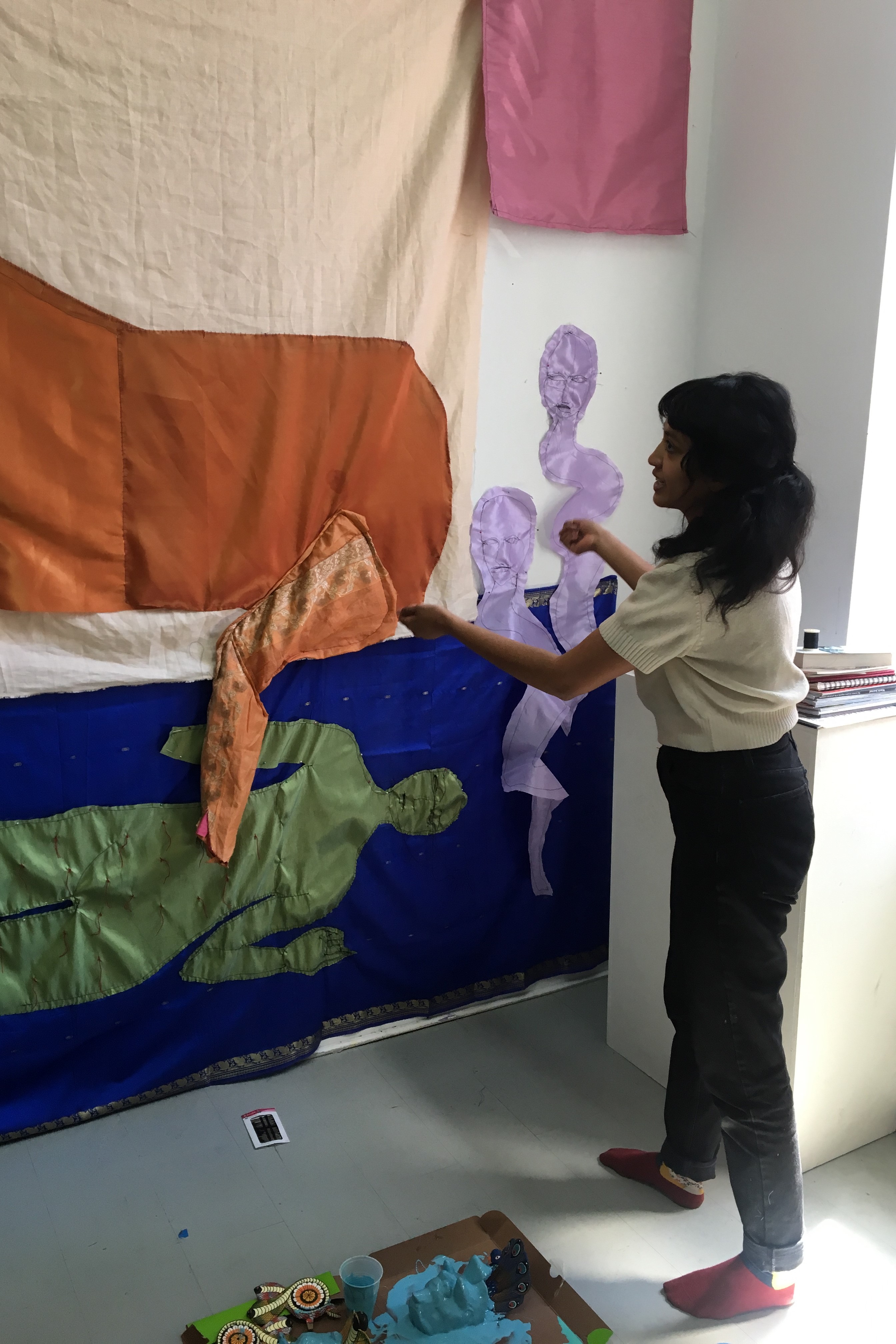 The initial stage of my process for making begins with automatic writing and drawing.

For my textile works, I create sketches which I then translate into textile collages. Cutting out shapes from colored cloth and drawing on them with my sewing machine. These are then sewn on like patches to large pieces of fabric and decorated with beading.

For my animations, I begin by making collages and drawing on Photoshop. I utilize photographs, scans from books, and screenshots in these works. After making several stills which function like a loose storyboard, I choose which ones to animate into gifs and longer animations.

How did you come to use both traditional materials and digital technology in your work? What layer of meaning does that add to your work?

Textile and specifically sewing, was a medium I gained access to very early in childhood. I was first taught to sew by my mother, who taught me a very simple hand stitch that I still use today. My relationship to textiles has felt like a very natural progression.

While I did have access to technology since I was a kid, I did not become interested in animation until college. Which is when I felt I was gaining more of an understanding of technology and its possibilities.

I am interested in both of the mediums because of how their process allow me to think through an idea. I often make textile and animation pieces to go together and I try to create a relationship or an echoing of the other. For example I will create a digital collage and that will become both an animation and a fabric design. Or like with my current work, I will project directly on tapestries and that animation will further the narrative of the textiles.

Tell us about Soft Space, a video + new media project that you co-founded that creates a platform for emerging artists! How did it come about? What are you hoping it provides for artists?

Soft space is currently on hiatus as we figure out how it can exist in Brooklyn.

It was a project I co-created with Christopher Garcia Valle in Portland, OR. And it was a way for us to use our garage which was an underutilized space which we had access to. It wasn't ideal because it had dirt floors and the roof leaked. But in a city like Portland where the rent was constantly being raised and buildings torn down and replaced by luxury condos, we felt an urgency to give meaning to this space. Because Portland is a majority white city, we felt it was important to give Soft Space a focus of showing art by queer and poc artists. It was about building community outside of institutions and academia and creating a space that functioned outside of the hierarchies of the "art world" for both artists and viewers. In some ways that made us more free to do as we pleased but also running the space more difficult because it was totally self-funded. Despite the trials it was such a fun project to be a part of, and it allowed us to meet many amazing artists from Portland and across the US.

What does it mean to be an artist based in Brooklyn?

I am still figuring that out!