Given the focus on the local food scene, highlighting a diverse group of local, Brooklyn-based visual artists became very important. BRIC is proud to have worked with City Point and Anna Castellani (the co-founder of Foragers in Brooklyn, who helped to create the new food hall), in the creation of several murals within the Market space. Here's some information about the new murals and artists involved.

Inspired by her childhood journeys into Colombia’s rainforests with her anthropologist father, Arocha’s mural style stems from a desire to celebrate the landscape’s astounding biodiversity. Her immersive murals surround the viewer with nature rendered in monochromatic tones, a color palette that references historic naturalist engravings and warns of a future in which the rainforest exists only in the past. Arocha layers specific birds, insects, and fern leaves; using found images that she digitally manipulates to create a textured and imaginatively dense scene. By installing depictions of nature in urban settings, Arocha’s murals draw parallels between the diverse ecosystems of Colombia and the cultural flourishing of her current Brooklyn neighborhood. 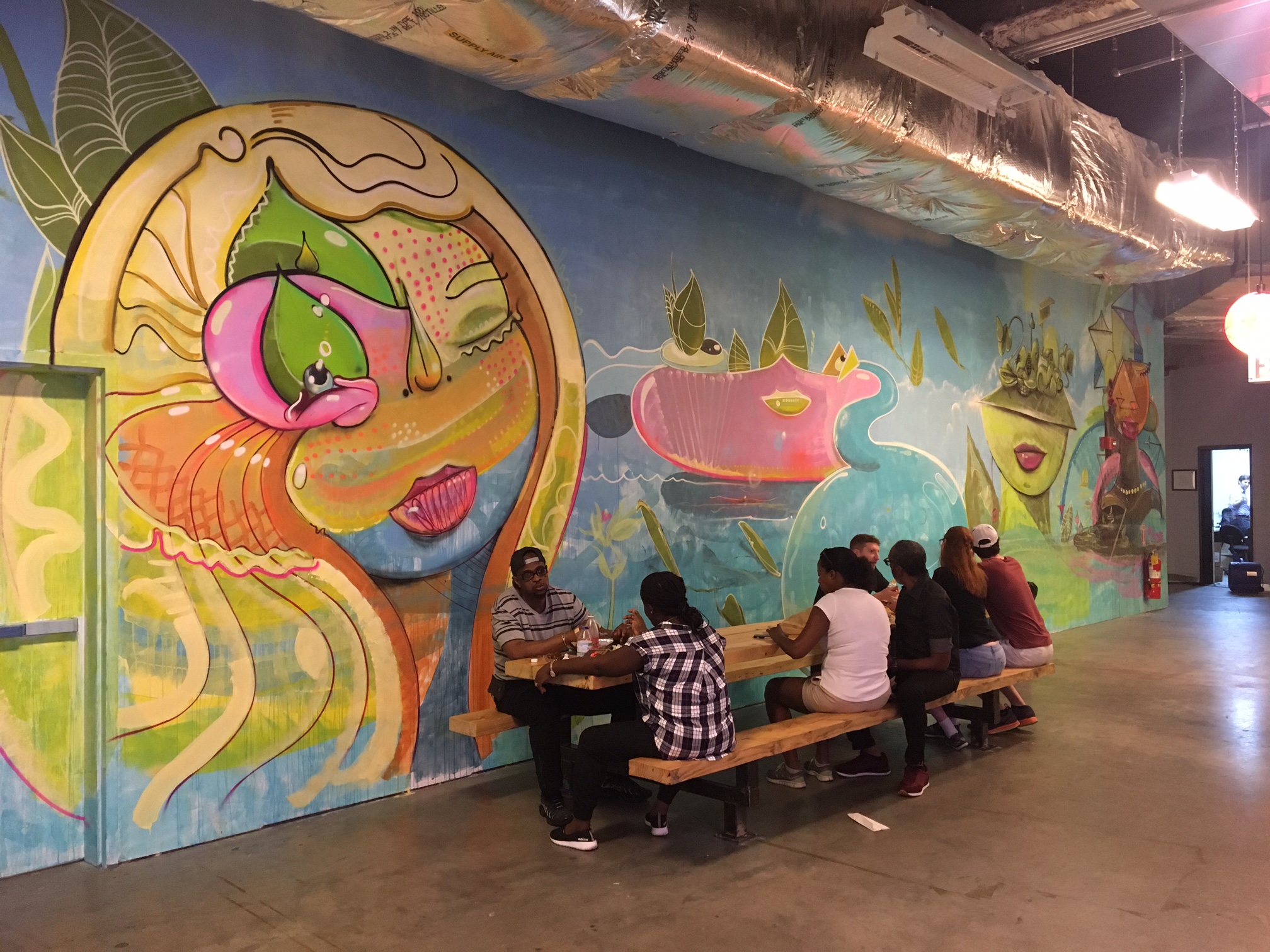 Cern, a native of New York City, got his start writing graffiti in the early 1990s as a young teenager. Cern’s mural at DeKalb Market Hall reflects on the role technology plays within our daily routines by blending exaggerated figures into an amorphous, brightly colored background.  The artist’s signature watercolor technique with India ink highlights the “accidental” drips of the graffiti process, grounding the work within the medium but never letting the viewer fully immerse themselves within the landscape. A self-taught artist, Cern’s array of murals can be seen all over Brooklyn and Manhattan, as well as in Rockaway Beach, Jersey City, and Miami. His work has been featured at BRIC House, Brooklyn; the San Diego Museum of Art; the Museum of Contemporary Art, Los Angeles; and Museo Brasileiro De Escultura, São Paulo, Brazil. His collaborative work is recognizable to any Fort Greene resident used to seeing the Biggie Smalls mural on South Portland Street and Fulton Avenue. 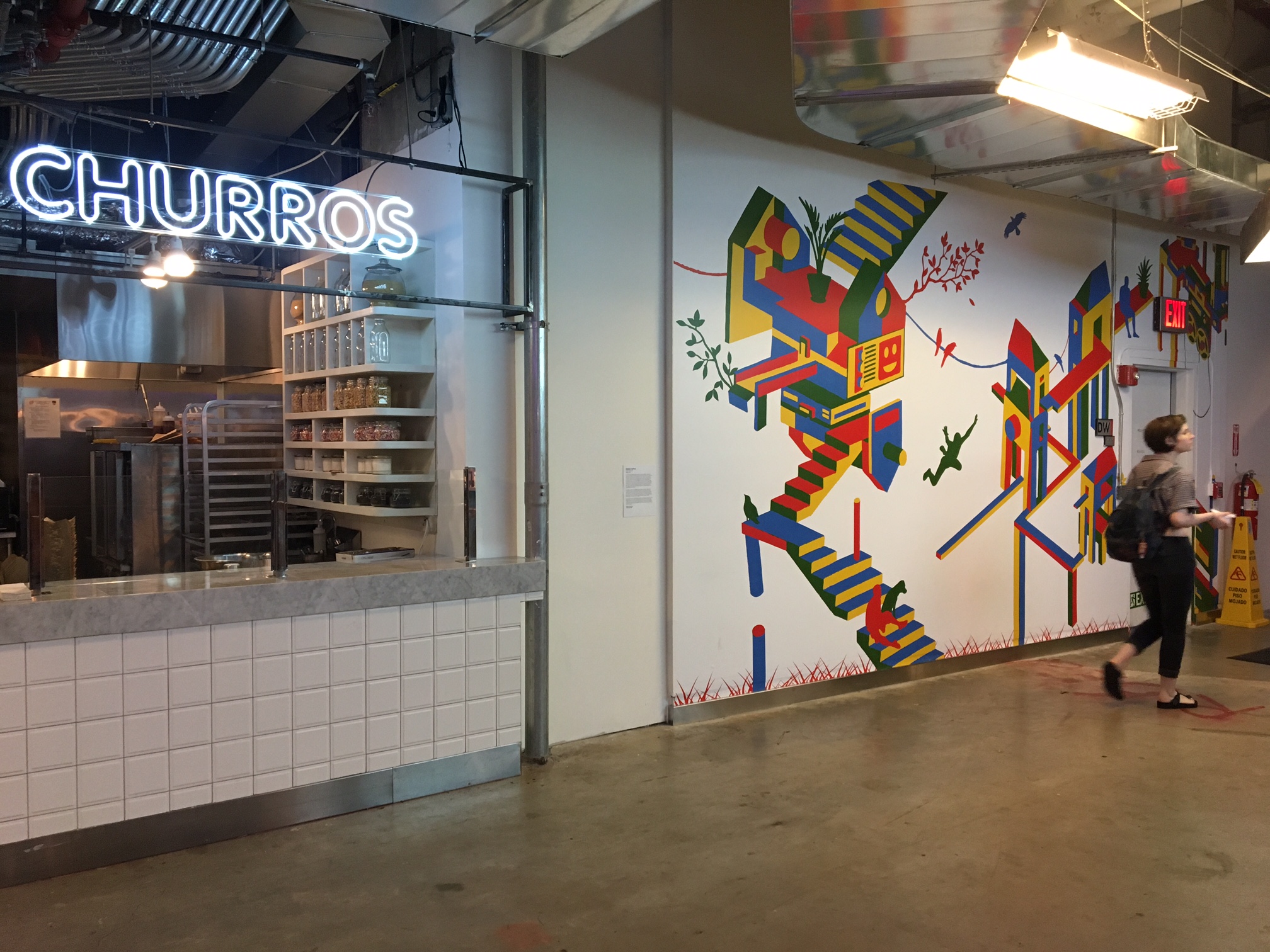 Steeped in the eco-political ideology and activism of “solarpunk,” a movement dedicated to imagining a utopic reality, Olalekan Jeyifous creates large-scale digital renderings that translate the existing architectural language of neighborhoods into colossal vertical statements. A “high-fidelity” interpretation of the De Stijl Dutch art movement’s iconic combination of geometric forms and primary colors, Jeyifous’ installation is palpably playful. With bright, elementary colors and large geometric structures, the work visually evokes the architecture of a playground or a child’s building blocks. In the simplest sections of the mural, affixations between structures are visible and obvious. Yet these simple connectors are adjoined to more sophisticated buildings where hinges, bolts, and wheels disappear, making way for complex architecture. Described by Jeyifous as a mash-up of invented architecture and vintage stereo design, Hifi De Stijl’s imaginative landscape feels at once recognizable and fantastical.

A sculptor, muralist and installation artist, Jeyifous was born in Nigeria and is based in Brooklyn.  His work has been shown in group exhibitions most recently in the BRIC Biennial: Volume II, and at the Studio Museum in Harlem, The Kitchen, the New Museum, Socrates Sculpture Park, and the Museum of Modern Art, all in NY. He has shown internationally at the Vitra Design Museum, Weil am Rhein, Germany; and the Guggenheim Museum Bilbao, Spain.

View these murals when you visit DeKalb Market Hall, located at 445 Albee Square West in the City Point building in Downtown Brooklyn.