In honor of Black History Month, we wanted to highlight a few of the Black artists who will be presenting work at BRIC and gracing the stage at BRIC Celebrate Brooklyn! Festival. Plus, check out our BRIC TV playlist featuring some of Brooklyn's Black creatives. 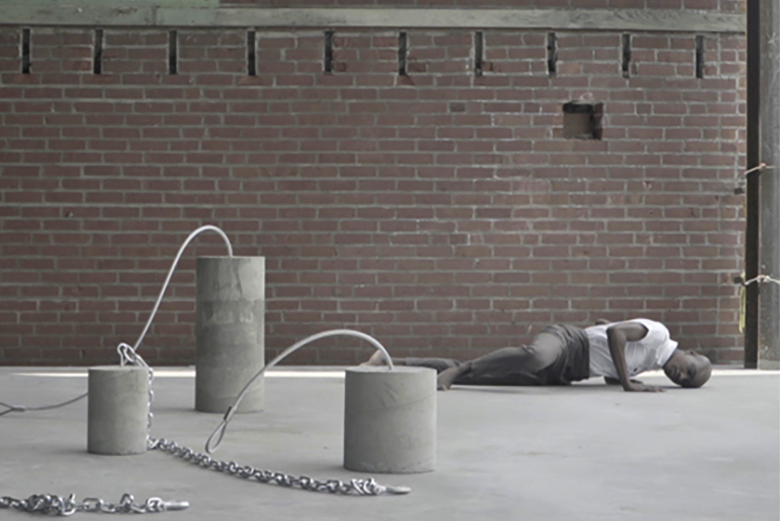 Christie Neptune is a Brooklyn based interdisciplinary artist working across film, photography, mixed media, and performance arts. Neptune investigates how constructs of race, gender, and class limit the personal experiences of historically marginalized bodies of color. Critically aware of both self and subjectivity, she illuminates the personal and emotional aftermath of a society that disregards and delegitimizes those that endure the brunt of historically upheld supremacies.

Neptune is a 2019-20 recipient on BRIC’s ArtFP, an open call for local visual artists to exhibit at BRIC House. As part of the ArtFP program, she will have a solo exhibition in BRIC’s project room, on view from Feb 20 – Apr 19, 2020 and titled Constructs and Context Relativity: Performance I. This exhibition brings together sculpture, video, and photographs based on research focusing on 197 Dixwell Avenue, an empty lot and former location of Q House, a beloved community center in the once thriving middle class African-American neighborhood of Dixwell in New Haven, Connecticut. Filtering this example of American urban decay through the lens of archeological ruins, Neptune seeks to draw a deeper narrative of the hidden potential of absence and presence. The neighborhood is at a critical juncture of regrowth, with a new community center under construction down the street. Neptune spent a year as an artist-in-residence at NXTHVN, a new art space in a former manufacturing plant in Dixwell. As an outsider and instigator of change in the neighborhood, Neptune’s body and performative subjectivity are present in the art objects on view. The polished concrete sculptures also evoke both the remnants of the crumbling architecture and of new development in the neighborhood. Neptune looks to establish a permanence to this hopeful absence, what she calls “the rise” between the historic promise of Dixwell “a fortitude of greatness…the meeting place of prominent black and brown people plotting revolutions, entrepreneurial development, legacy…” and the promise of Dixwell’s new future. 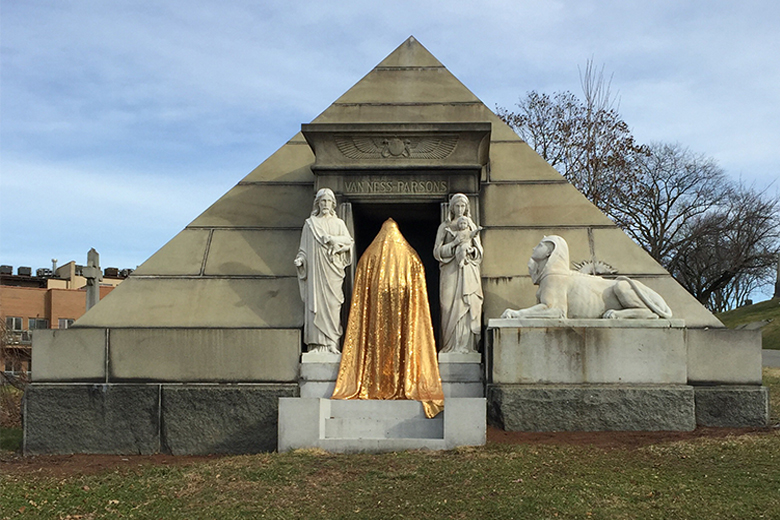 Nona Faustine is an award-winning photographer and visual artist born and raised in Brooklyn, NY. Her work focuses on history, identity, representation, and evoking a critical and emotional understanding of the past. It proposes a deeper examination of contemporary racial and gender stereotypes. As she writes in her artist statement “situated inside a photographic tradition while questioning the culture that bred that tradition, my practice walks the line between the part and the present. My work starts where intersecting identities meet history.” She uses self-portraiture to explore the legacy of trauma that African-Americans have inherited while reconstructing the narratives of race and stereotypes through a privileging of memory, folklore, and personal histories.

The works that will be included in Death Becomes Her are part of a series inspired by the Greek myth of Persephone. Photographed at various locations throughout The Green-Wood Cemetery, Faustine places herself in the role of Demeter in late autumn as she searches for her daughter among the dead. Faustine’s previous series have shown her posed nude across New York, specifically at locations associated with the American slave trade that are often unmarked and unacknowledged. This new work continues with the themes of lineage and inherited pain, seeking out a history of trauma that has been buried and ignored. “The work,” Faustine says, “is a love letter to black women. It is a love letter to New York. It’s about the trauma of America…It’s saying, ‘I was here.’” 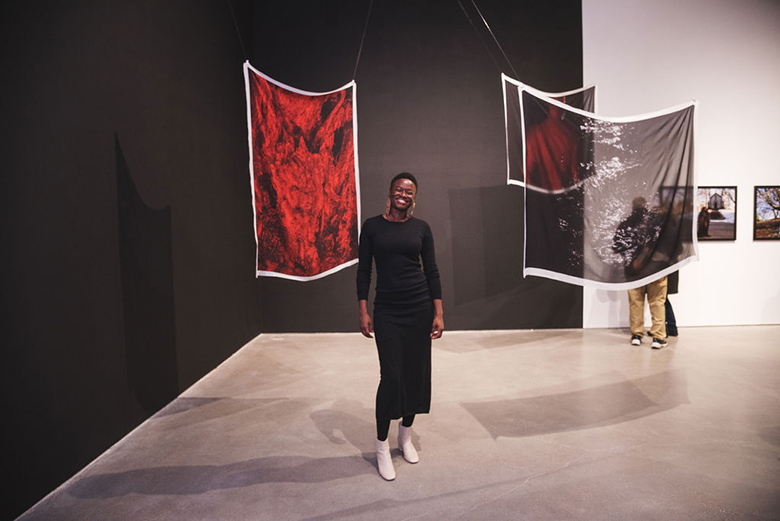 Keisha Scarville with her work in Death Becomes Her. Photo by Jordan Rathkopf.

Image caption: Keisha Scarville, from the series Placelessness of Echoes (and Kinship of Shadows), 2016

Keisha Scarville is a Brooklyn-born and -based visual artist who weaves together themes dealing with transformation, place, and the unknown. Her work has focused on rituals mourning, the unseen or unknown stories in objects left behind, and the power in memories and what we choose to focus on. In a striking earlier series, Passports, Scarville built upon existing passport photos of people of color, collaging other images or creating stylistic additions with glitter, marker, and pen. These actions call forth a collective history and culture that, while existing, is not immediately apparent on these government regulation photographs. This subversive transforming can also be looked at as a remembering of the vibrant individuality of these people that has been silenced by institutionalized racism and the history of American supremacies.

Inspired by Guyanese author Wilson Harris’s concept of the “possessed, living landscape” in his novel Palace of the Peacock, Keisha Scarville’s photographs on view in Death Becomes Her explore places that are simultaneously in communion with the living, the dead, and the unborn. Scarville created these images at night, often nude and in a forest, constructing objects and images that inhabit the spatial, temporal, and visual ambiguity of darkness. In fixating on the process of emergence, Scarville establishes a framework through which the landscape witnesses the unfolding of its own epistemology, history, and narrative. She asks “How do various environmental forces shape our sense of self, of security and address questions of belonging? How do we engage the body and place as sites to unearth latent narratives?” 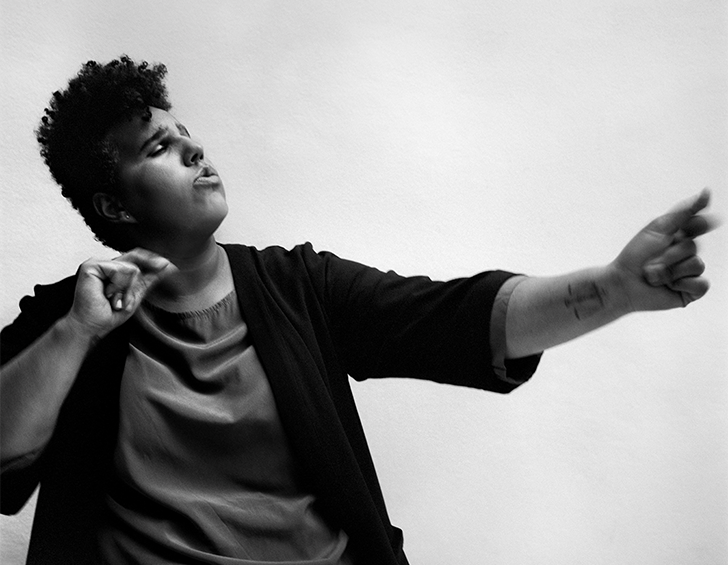 Brittany Howard will open our 42nd season of the BRIC Celebrate Brookln! Festival with a free concert!  Howard, whom you may know as the frontwoman and guitarist for Alabama Shakes, will be on tour celebrating her bold solo debut album Jaime.

In an interview with KEXP, Howard said:

"I think a song like Goat Head which is on my recond was really unexpected. It's a song about my mother and father, and them having their relationship, which is an interracial relationship, in Alabama in the early '80s, and how hard that was for them. Especially a certain incident that happened that my family doesn't talk about, and it always stayed with me. And so I wanted to talk about it, and I wanted to bring it to light."

For Black History Month, our Featured Focus playlist spotlights the work of Black artists, authors, creators, and curators with short form documentaries, scripted series, and more. From art collections to scripted comedies, interviews, and live performances, our playlist is just a small sample of the incredible work we celebrate every day here at BRIC.