Janie B. Samuels is a Brooklyn artist whose work centers around politics, intimate relationships and nature setting based on her everyday life. Samuels received her BA from Bennington College, Vermont and later received her MFA from the School of Visual Arts, New York. Samuels express her ideas through media/videos, drawings, paintings and most recently photographic gel transfer; all together her ideas are based on the aspects of humanity. She seeks to transform images and videos into personal and universal stories that would hold observers’ attention and form connections.

Start out by telling us a little about your background as an artist and how your artistic practice has developed over the years?

I am originally from the Finger Lakes region in upstate, NY. I can’t remember a time when I wasn’t drawing. I spent my early childhood walking out in the pastures to draw the cows and horses.  My family moved to Manhattan when I was 10, at which time I would often would go to Central Park to draw in Sheep’s Meadow.

I received my BA from Bennington College, where I majored in Lithography and Painting.  At that time, I was one of three figurative painters in the art dept. as the presiding thought at the time was that figuration was dead. There was a great deal of pressure to work abstractly or conceptually.  However, I was enamored by what I saw in nature and knew that, although I was interested in formal abstract thinking, my interest in the narrative meant I would never fully embrace abstraction.  I left to study a year abroad with Bernard Pfriem at the Lacoste School in southern France, where I ultimately remained for two years. Upon my return to New York, I continued my studies, receiving my MFA from the School of Visual Arts in Manhattan.

In the early nineties, I designed and built the sets and co-produced several plays written by my husband, Evan Gubernick, for Off-Broadway and Off-Off Broadway venues. This had been an opportunity for me to focus on another love of mine, building things. I could use the carpentry skills I had learned in Prep School where I had built the sets for our school productions. and my interest in architecture to play with space. In fact, I had initially gone to college thinking I would study set design or architecture, as I had not been aware at the time that one could study art.

How have the things that inspire you to create art grown or changed since the beginning of your career?

I had initially drawn and painted directly from nature and direct observation, at which time I developed my palette and my drawing style. As I matured and understood that I was primarily interested in interaction rather than subject, I started to work more from photographs specifically images from such publications as he New York Times.  Many of the works resulting from these images are a comment on “collateral damage” of war, what I perceive as the lack of justification for loss of life, and the personal loss of those left behind – often mothers and their children or just the children. It is not pertinent to understanding my painting to know from where specifically the image was taken nor is it important to know who these people are. I hope to create an image that is universal in its content, but intimate and personal enough to remind the viewer of the individuality of those portrayed.  I was struck by the long history of man’s senseless violence, its hypocrisy.  I felt compelled to try to humanize these narratives in the hope that my work could somehow change the psyche that made it justifiable to support prejudice, avarice, malice over compassion and tolerance. These works are for the most part narrative commentaries on the inequity between the people and the government that rules them. The challenge was to make work that had difficult subject matter but make it pleasant enough to look at- so that the viewer was willing to look at the work- not away, be drawn in, stay with the work long enough think about what they were seeing, to be taken in by it, affected by it and as such I might effect change at least on a personal level.

In addition to working with images from the Times, I produced work from my own photographs, such as the homeless, musicians, street fairs, people from every day scenes. There is a correlation between these works and the ones that are more political in content. These images are also depicting the personal and the universal. They depict humanity. In many ways, you can see a relationship between these works and my photo gel transfers.

How do you look for ideas when starting new work?

I work in a variety of media as each one addresses different interests for me. The origin of these ideas come from a variety of places. They can simply emerge from a conversation I may have had with someone -or a conversation I overheard - or the current news stream - or the way the light might hit a tree or the shadows as I pass by. For works that are more complicated philosophically I find painting to be a better medium as I can manipulate the color and the drawing to address these issues. If I am interested in the beauty that surrounds me I tend to work from photographs and manipulate them in the computer. 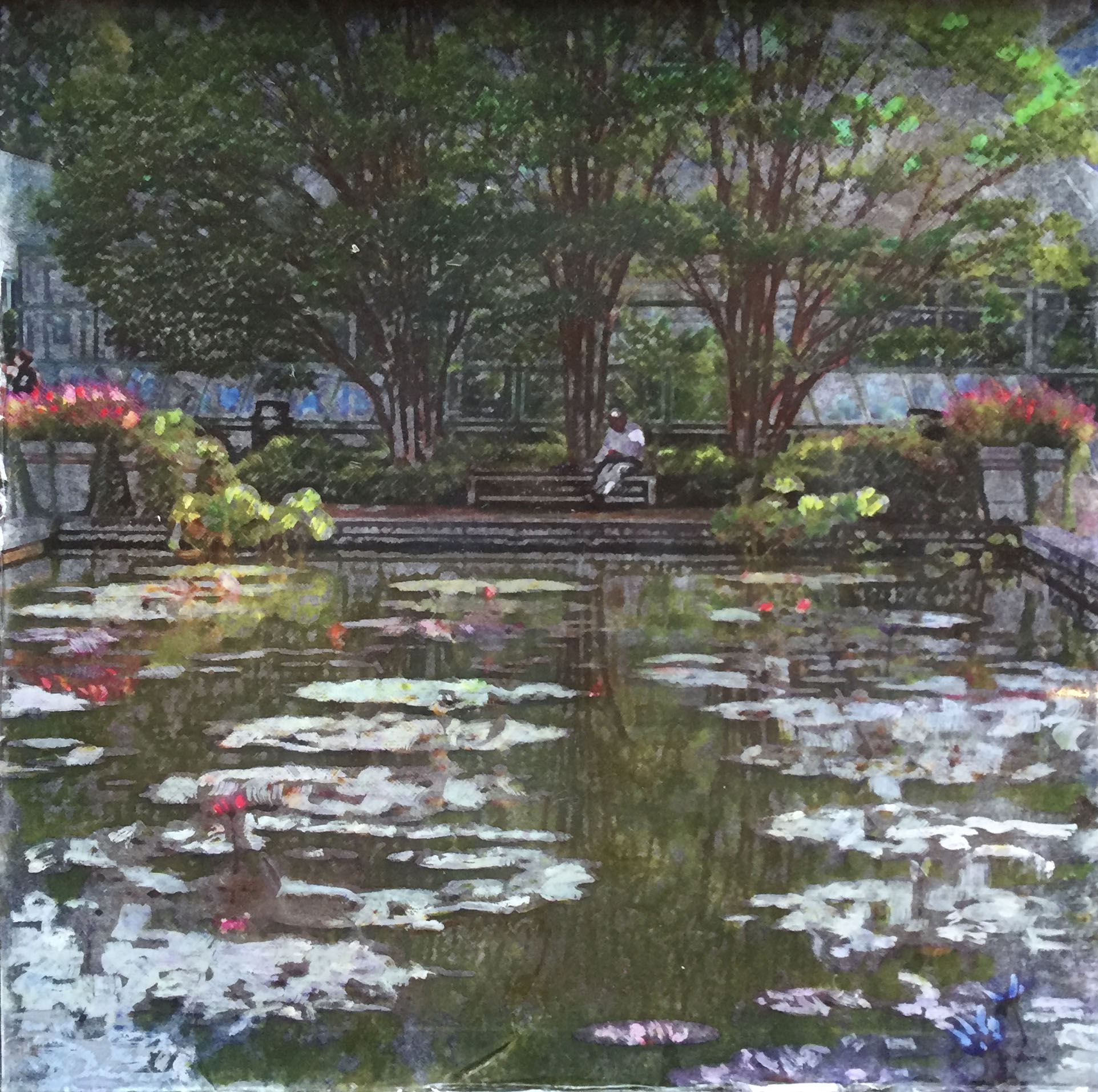 Your paintings are mostly figurative – what drew you to this subject matter and how do you decide what sort of scene you will paint?

I draw figuratively as I am interested in the narrative, which can’t be accomplished in abstract works. Abstraction can emote and can address formal concerns but by its very nature it distances you from the immediacy of any interaction. The more abstract the image the more distance you have from the narrative. Although it can be complicated conceptually, it is more decorative. It doesn’t draw you in the way figuration does.

What informs the color palette you use in your figurative work?

The color palette I use is intuitive and responsive. I want the color to sing, to resonate, to vibrate. I spend a fair amount of time on the drawing, thinking about how I want the drawing to move the eye through and around the work. When I am actually applying color, I try to intuit it- to rely on my vision not my intellect. It’s the one area in my work where I am trying not to impose thought but rather sensory and visual resonance.

You have said you like to portray simple ideas on human interaction – how do you achieve the level of intimacy evident in your work?

I misspoke. The ideas are not necessarily simple as much as they are direct.  I want the image to be direct so as not to dilute the message or the narrative. The less diluted the more effective the emotional content. 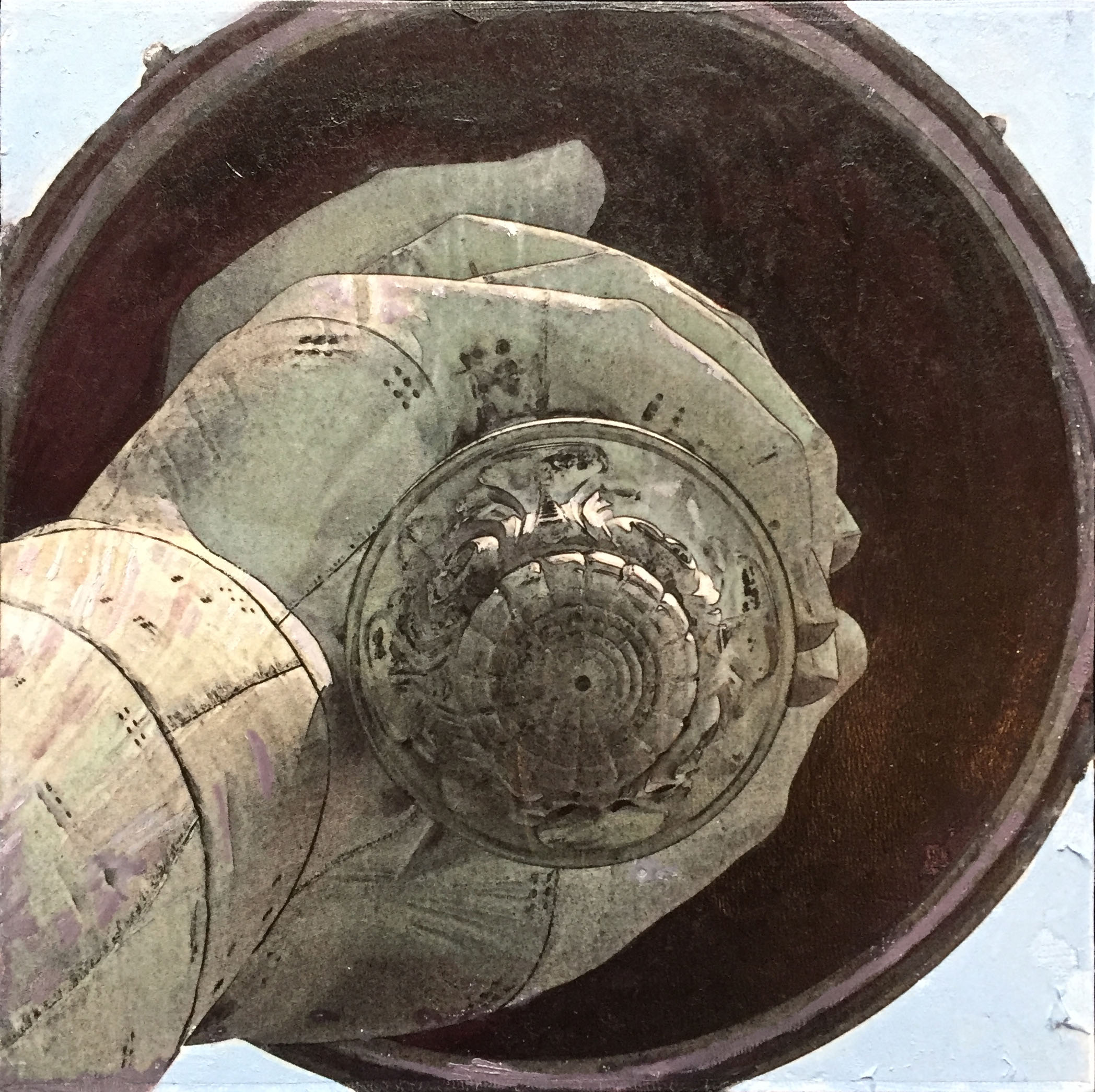 How have recent politics affected your work?

Many of the images for my gel transfer/oil works are of place. I have always photographed what I find visually inspirational, but I do not consider myself a photographer, so I have never done anything with these images. Making the gel transfer and oil works has permitted me to pursue this interest. These are more personal images from my day to day life. Once again, I am attempting to portray and make it feel universal but in this case, it is from my experience not my reaction to cultural or political events. These are small personal events that I am making broader rather than broader events I am making intimate. 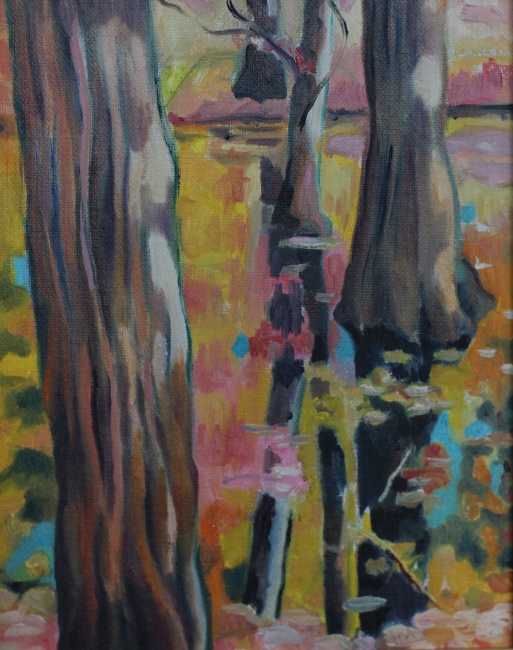 How does your new work (gel transfer) signify an embracing of technology in the artistic process?

I use technology in nearly everything I do, although my hand is still present in all the work. In my drawings, I often make a drawing by hand then scan it, draw in Photoshop, print it, and draw on it again.  With the gel transfers, I manipulate my photos in Photoshop, print them and transfer the image via gel transfer to a panel (and recently to glass, as well), and then paint with oils on the panel. My process is more portable this way. I can work on the computer anywhere at any time.  I am now beginning to use my smart phone to photograph more frequently, which permits me to photograph more subtly than with a camera. No one pays attention to someone with a smart phone. Very different experience when you are using a camera. People feel a camera is more invasive- This may allow me to capture more intimate moments.

How has being a Brooklyn artist influence your work in politics and humanity?

Brooklyn is my home. I chose Brooklyn, because it is multicultural and multidimensional. The borough has a wonderful range of cultures and people co-existing together, and, often in the same neighborhood.  Brooklyn feels like a small microcosm of the world. It is a borough of immigrants, creative and ambitious souls. A borough that for the most part is comprised of people whose priorities I share, ones of intellectual and creative expression for some and new Americans trying to forge their paths on another, all living side by side. Brooklyn gives me hope. 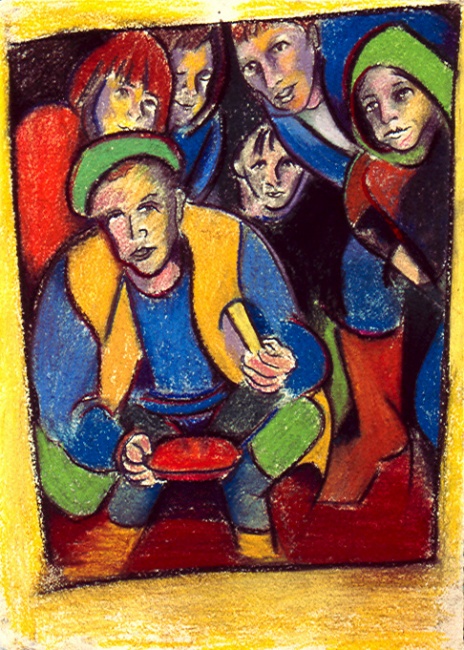