Now in its third year, the BRIC Visual Artist Residency program gives visual artists the space, resources, and support to take their work further and explore new directions. Jakob Kudsk Steensen is one of artists who has taken up residence at BRIC House this summer. Steensen is a Danish installation artist, based in New York, who combines satellite technologies with video, virtual reality and computer generated environments with real world landscape explorations and cartographic research. We visited Jakob in his studio at BRIC House and learned more about his current project.

BRIC: How does the current project you're working on during your residency at BRIC House relate to your previous work, A Cartography of Fantasia?

JKS: A Cartography of Fantasia was based on a documentation of tourist landscapes built from financial speculation in the desert. They had never been in use and I visited them between 5-8 years after they were built. I looked at the animal species and the kind of landscape that had come into existence today. I spent about two months driving around exploring these locations in the desert.

With my new piece, I’m trying to revert the process. Instead of making a quasi-documentary piece, I am building everything in virtual reality. I am building a replica of the tourist island Bora Bora in French Polynesia. Based on research into the future climate of French Polynesia, I am creating what the island may look like in the future. As a viewer, you are following an anonymous protagonist in first person who explores the Island. He is also hallucinating and daydreaming, and he just lost his job. The whole thing starts in a simulation of a Scandinavian minimalist apartment where the protagonist wakes up to the sound of a mosquito, before collapsing and waking up on Bora Bora. It has this Alice in Wonderland, fantasy, exploration, daydreaming element to it. The whole story is a kind of mash up of future and past and middle class escapism and dreams of a tourist resort. I tried to combine these Nordic fantasies of the south with colonialism, sci-fi, and different things. So in the end, this material will become a large video installation I am building as an artist-in-residence here at BRIC. 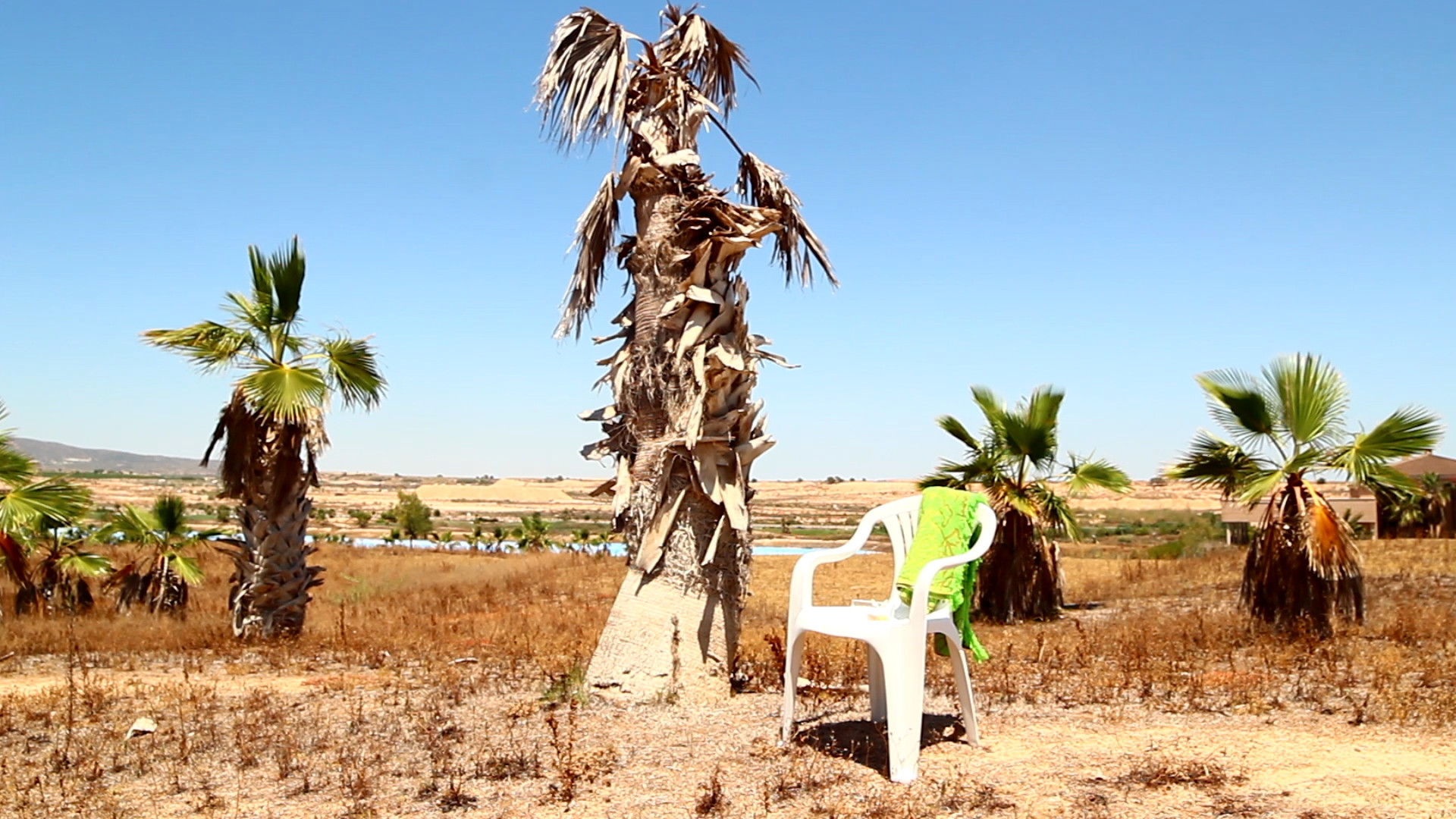 Still from A Cartography of Fantasia.

BRIC: I wanted to ask about your choice to create an installation. What are you hoping that viewers experience and how do you see the gallery space playing into that?

JKS: In general I’m interested in environments, so when I go to an environment to explore it or when I create it virtually I want a sense of full immersion, . . . like you are there to an extent. As a gallery, white cube spaces try to remove as many references as possible and just create a white blank canvas that you can show in. So for me, in a way, it is the ideal artificial and culturally constructed space to show my virtual future fantasy island in. It is hard to find a space that is more culturally defined than an exhibition space. Comparatively, on the computer you start with a blank canvas and then you put stuff in there and start building your environment. So it is interesting for me to work within that context. I often use multiple projections and screens shown on different surfaces, so when you walk into my constructed space you have to move your body and head physically in order to register what is going on. I am interested in relationships between constructed environments, video documentations of landscapes, and then virtual fantasies about different types of ecosystems. 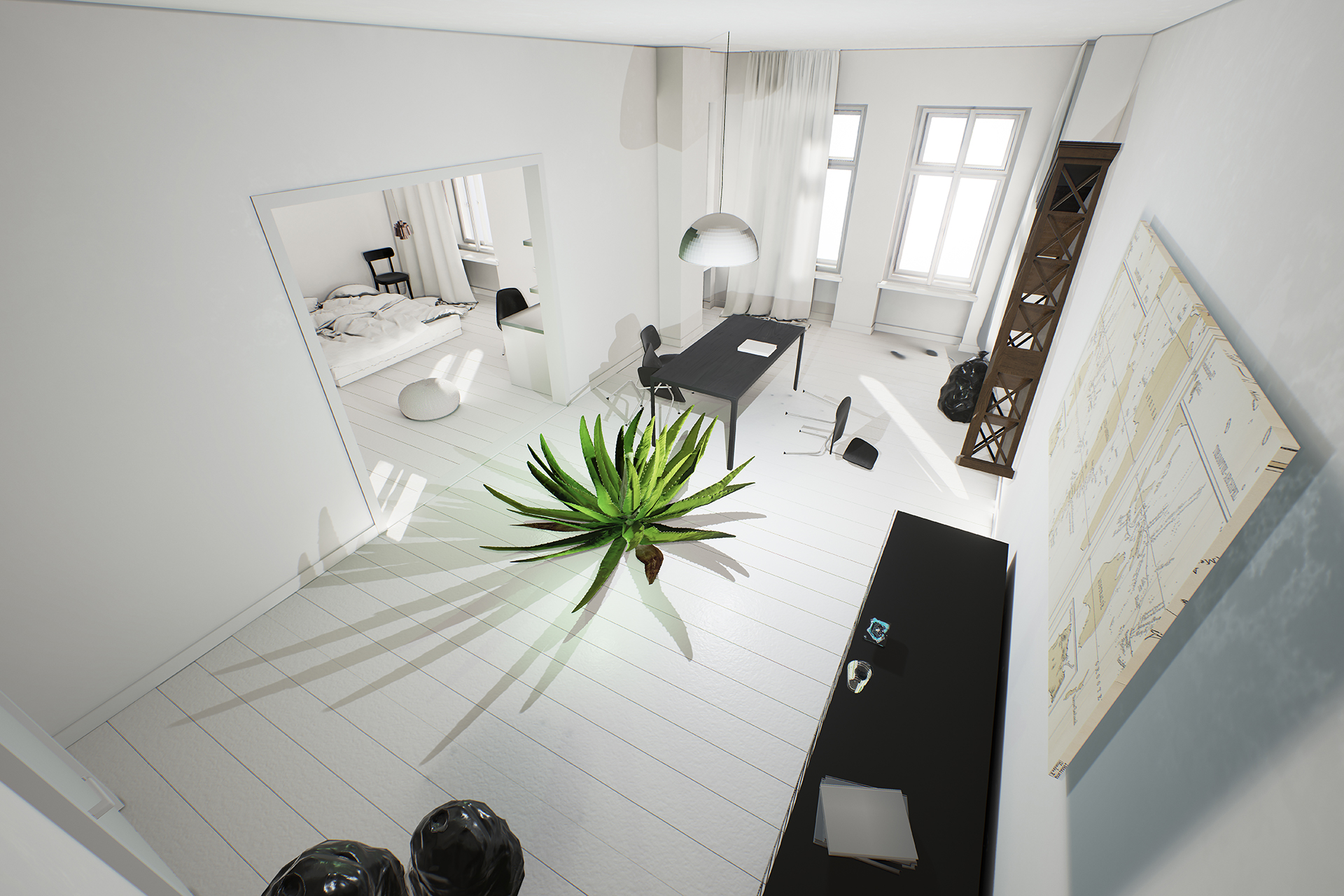 Screenshot of the virtual rendering of a Scandinavian-minimalist apartment.

BRIC: Why tourism? A lot of your work deals with ecology and technology and fantasy, but then why tourism specifically?

JKS: I think when you look at tourism specifically, it says something wider about our construction of environments and our individual place in relation to nature and history. We live in a consumer driven global culture, and tourism is something you consume. You buy into a particular fantasy of a type of landscape, or a specific interpretation of history. By the way, if you look at the history of tourism, it started at the same time as colonialism. It was an early form of the experience culture industry for the rich and urban. It became a contrast to modern urban life. So for me, tourism is a kind of epitome, or symbol, of an underlying structure today that influences how we experience nature and history. The that reason, I use virtual reality these days to emphasize the virtual “reality” of tourism to an even greater extent than in my previous work, A Cartography of Fantasia. Especially because I now live in the States. It feels much more media-consumer-centered here than many other places I have been. I see a lot of artists who also work in virtual reality in the US, but I cannot help but to think that often people consume and make VR primarily because of some quite (just my opinion) superficial flashy effects. I feel it’s a bit of a trashy medium at the moment, to be honest.

So I am interested in drawing relationships between the VR media fetish in the US, and modern tourism. When you go to a resort in the Bahamas for example, it is a total fantasy. Developers have changed the whole ecosystem there, even the land masses, . . . they sculpt them, and they have imported palm trees that actually don’t grow on the Bahamas. This form of landscape-tourist-transformation takes place all over the world. So you go there, and you think you are experiencing the true Bahamas’ tropical landscape, but it is actually a hyper-commercial landscape converted by modern industrial technologies. In both tourism and media industries, companies spend extreme amounts of natural resources and working hours. They want you to buy a fantasy, to make you feel like you experience some meaningful authentic journey different from your own everyday life, but it is all hyper constructed and “unreal.” 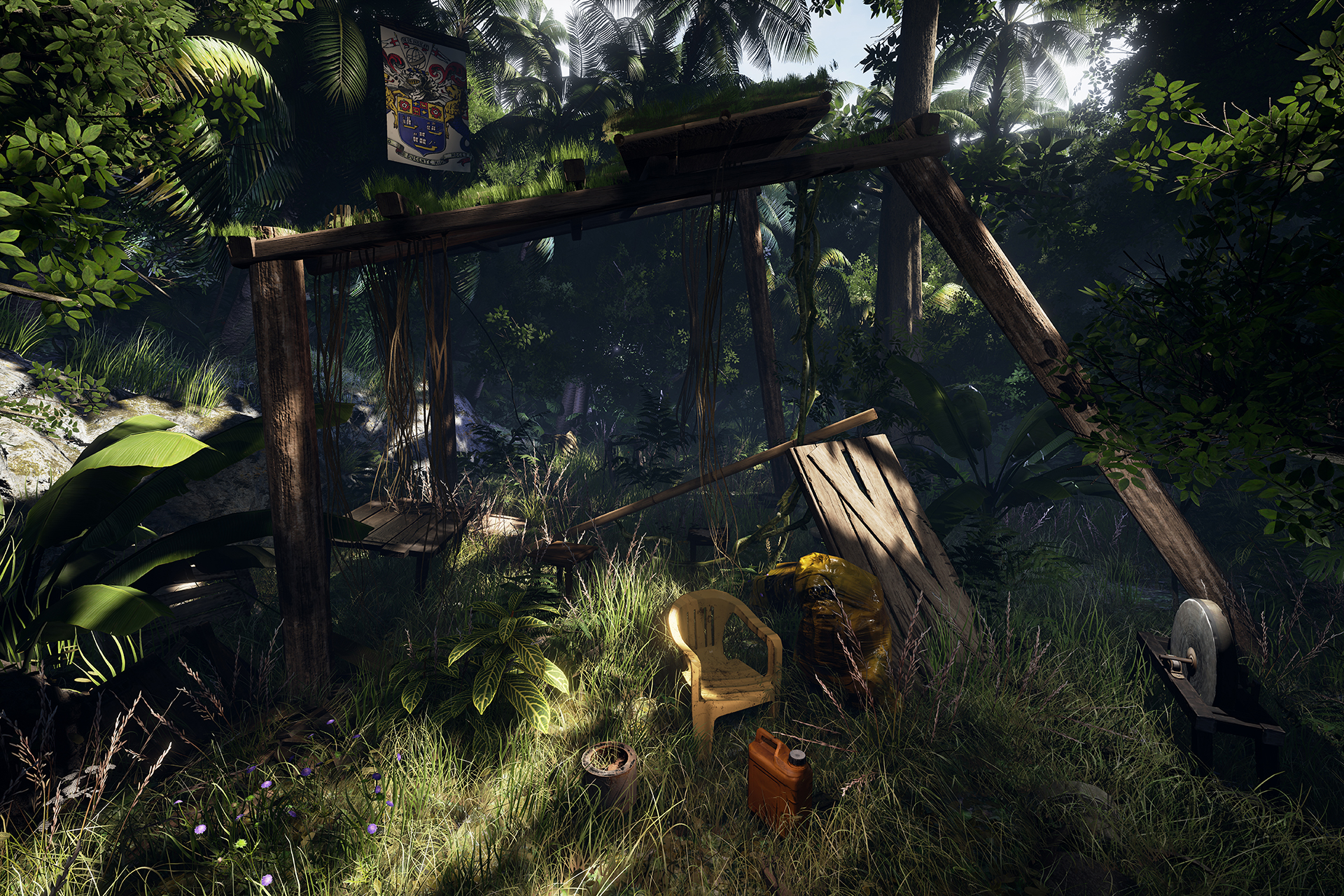 Screen shot from the virtual rendering of Bora Bora.

BRIC: How do the technologies play into your work ideologically and practically?

JKS: So, I started first with painting. I then turned to video, then virtual reality and installation. I am also interested in the psychology of various types of mediation practices. What feelings do you get from different camera types, or camera movements? I also explore what products exists in visual culture more broadly, in cinema and games for example. I understand all media, and tourism, as forms of physical experiences in time. You experience it physically in time, even in the cinema or going on a bus tour or something. All of these things involve a starting point, and an end; a journey and some kind of transformative process.

BRIC: Are there any artists or writers or people who have influenced your work?

JKS: Oh, there are many! I’m reading a book right now called The Possibility of an Island and that is a really big inspiration for me right now. Since a kid I have followed the development of graphical industries, in cinema and computer games in particular. What I use myself is called physical rendering. So everything you see on screen is interactive, you can walk around in my environments because they happen in real time. I also like the book Congo by Michael Crichton. It is a sci-fi-tropical novel from the 1980s, where a team of researchers hunt for rare earth minerals used in satellite, in a jungle in the Congo. Jussi Parikka is a really cool writer. He is a big influence right now  and he wrote a book called the Archaeology of Media. That book explores how we can think about the physical, ecological, and archeological foundations of media. What minerals are your computer made of? I general, I have a passion for natural history, illustrations and science fiction, as well as just looking at various recordings from satellites, submarines, and microscopes. They are all technologies which in some way extent our human perception system. The first Alien movie is also a big inspiration for me. Mainly because the alien is not made with a computer, but with a costume. That makes the film feel very tactile and physical. I think that physicality is lost in a lot of productions today, so I want to bring that back somehow via the physical installations I show my videos in. I am also inspired by concept art in computer games. The industry actually hires painters to do sketches of each scene before they are rendered digitally. 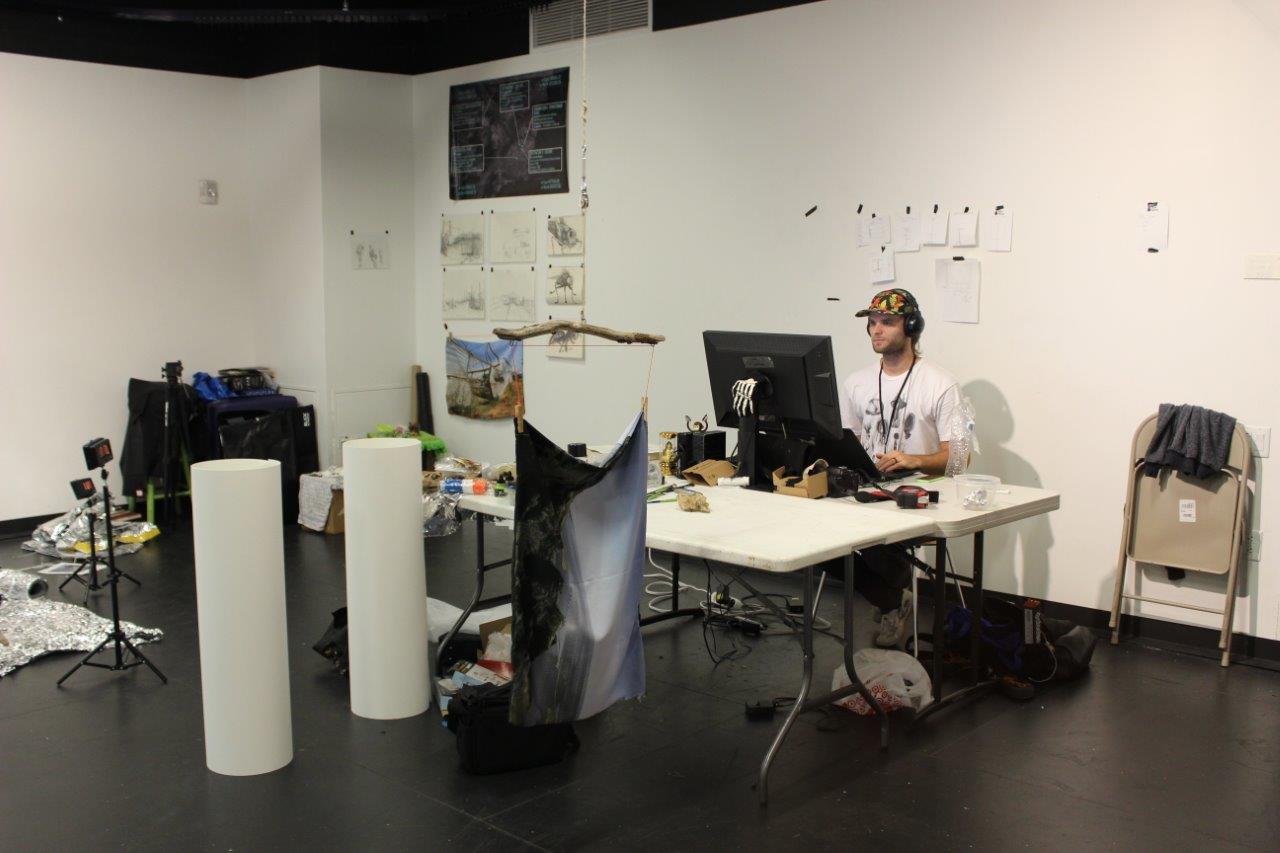 Jakob in his studio at BRIC House.

Follow Jakob on Instagram, and see what he's working on. Visit his studio during BRIC's Summer Art Social on August 10th!