In celebration of our 40th anniversary year, BRIC has launched the Future Historical Society (FHS), a multi-generational team of artists, activists, educators, and community members who represent a diverse range of connections to the neighborhood of Fort Greene. Led by artist Yazmany Arboleda and the Community Engagement team at BRIC, FHS members will work collaboratively to create a public project that integrates elements of storytelling, art, and media-making to document the histories of Fort Greene, while also envisioning its future. The work will premiere during the BRIC OPEN Arts and Ideas Festival in April 2019. The Future Historical Society is what Yazmany calls a "Living Sculpture," people coming together to transform their experience of the world through co-creation.

Corazon Aguirre is an award-winning photographer, a visual designer and a creative producer based in the heart of New York. She is a member of the National Association of Hispanic Journalists and the founder of Liquido Creativo. Her photographic work has been published nationally and internationally and recognized by the New York Press Association. Corazon graduated Magna Cum Laude with a double major from Savannah College of Art and Design. She holds BFA degrees in Graphic Design and Photography.  Corazon is a dynamic bilingual creative, who loves art, music, fashion, culture, and technology and has an inherent affinity for the work of Irving Penn, Henri Cartier-Bresson, Steve McCurry, and Richard Avedon.

Raha Behnam is an Iranian-born first-generation immigrant, and child of Persian artists and revolutionaries. Much of her time is spent mending the breakages with her original cultural roots and building new ones in Brooklyn.

Beryl Benbow is a multimedia artist, mother of adult, fraternal twins, Aaron & Koren, grandmother to Koren’s children; Miia, born on my birthday and Kai who favors like her. She takes pride in being a native Brooklynite who has lived a fun filled life-exciting and at times scary, tumultuous and dangerous- the things in life great movies are made of!

Ramona Candy is a Brooklyn-born motivational artist, curator, choreographer on canvas, arts administrator, accidental historian, and occasional blogger. Her work and life are inspired by her dance career, her Caribbean heritage, growing up in Bed-Stuy, and forever by her extraordinarily resourceful mother, Carmelite.

Jamilla Carr is the granddaughter/daughter of immigrants from British Guyana to the island of St Ann, Jamaica; a mother, an older sister, a genuine companion, and a lover of Life who hopes to make an imprint of good before she leaves.

Huey-Min Chuang is a hybrid of Nancy Drew and MacGyver. And if you don’t know who they are, let’s just say that she love gadgets with multiple purposes and questions with no apparent answers.  Don’t ask her where she’s from, ask her where she’s been. Oh, and her name is pronounced in Spanish, not like Huey in Duck Tales or Huey Long. 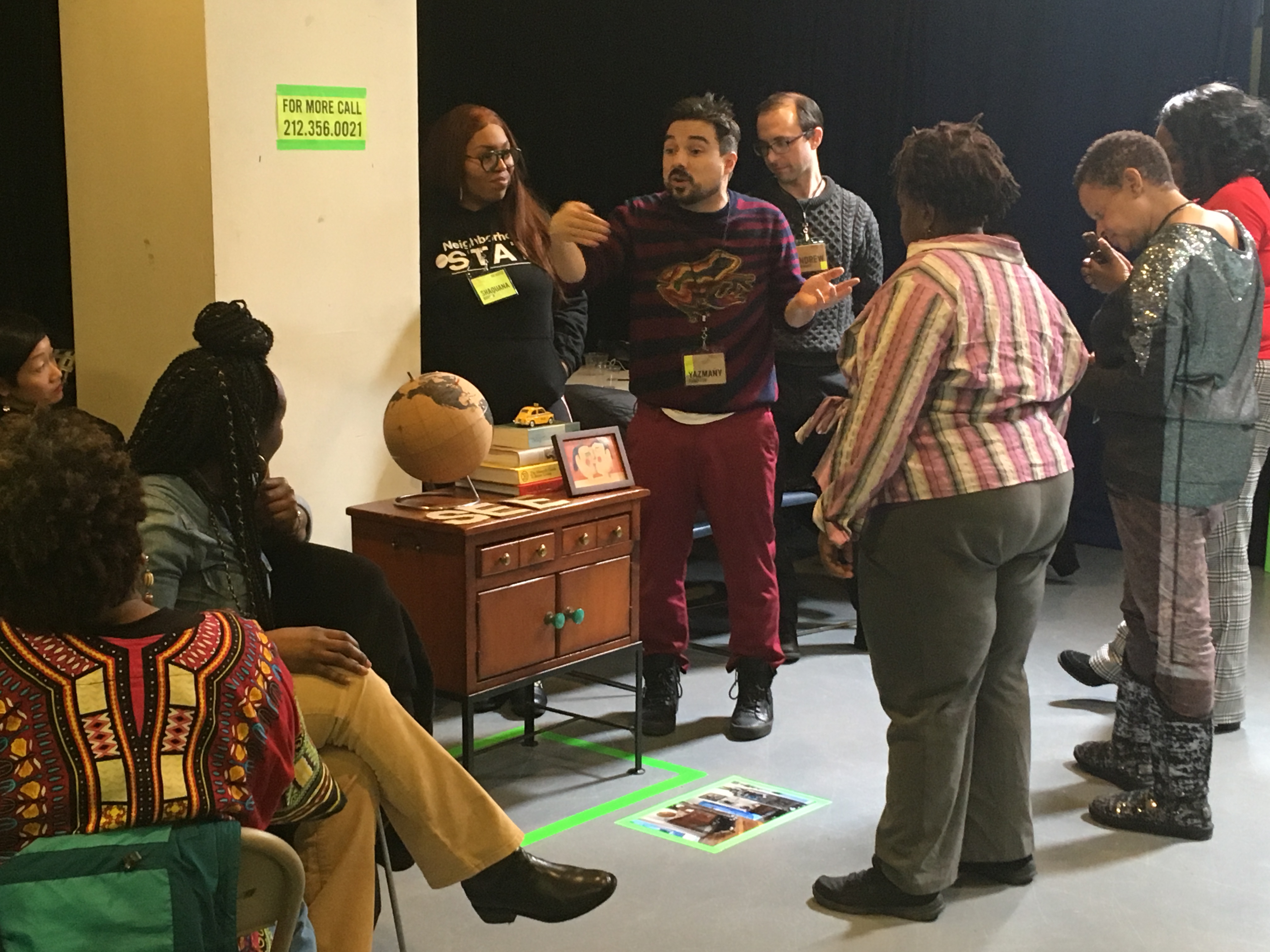 Members at the first meeting of the Future Historical Society.

Ryan Conarro is an interdisciplinary performance maker and community engagement facilitator, with familial and artistic roots in Georgia and Alaska. He is a Collaborator in Residence at Ping Chong + Company in New York. He and his husband Nick live in Fort Greene, where he is actively involved with Lafayette Avenue Presbyterian Church's Social Justice Committee and with Fort Greene Peace.

Christopher Cook uses photography as a way to tell stories and evoke feelings. It captures a split moment which cannot be reacted again. He tries to combine his visions, observations and emotions of everyday surroundings. His goal in this art form is to bring out every uniqueness he discovers.

Molmol Kuo is a Taiwanese artist, educator, and researcher. She builds unique devices for unique problems, makes curious things with electricity, and creates tools that help her tell stories about people, cities, and sometimes even objects.

Andrew Losowsky is the grandson of two undocumented immigrants. He was born in the north of England, and now lives here.

Terri Patterson, sometimes referred to as Terri P., is the ultimate mother, provider, daughter and friend who resides in Bed-Stuy. She spends countless days in Ft. Greene where she has built both friendships & business relationships, and pondered over numerous ideas that have become "things." She is the creator, the supporter, the giver, and the one who appreciates the simple things in life. She says, "The best thing an individual can do in life is be their absolute self and all the while walk in their truth.”

Jerry Pura: Fort Greene and its people stole Jerry Pura’s rather soft heart back in 2012 while he was visiting from Melbourne, Australia, and he never left. Since then, his playful exuberance and ability to be blissfully dense regarding New York standards of talking to strangers has kept him in the good graces of his community and neighbors.

Tanja Richardson is a woman who enjoys poetry, writing, Hip Hop, and various forms of art.  Community outreach, giving, and connecting people are her passion.

James Roberts, aka Brother James, was a playwright, drummer, curator, and beloved member of the Fort Greene, Atlantic Terminal, Ingersoll, University Settlement, and BRIC communities. Prior to his passing, he was the Vice President of the Atlantic Terminal Tenants Association and a founding member of the Intergenerational Community Arts Council (ICAC). He wanted the best for his community, and that meant he wanted more ways for people to express themselves and share their stories. To know him was to love him, and he will be greatly missed. Peace and blessings, Brother James.

Phyllis Roker is a documentary filmmaker with endless curiosity about people, events, and moments in history. She passionately explores the intricacies of all three in her films.

Desiree Rucker, beautiful dreamer, is a Bronx-born, Brooklyn-raised artist who uses words and images to speak to the world.  A writer (MFA Creative Writing), filmmaker (Docs and TV), and photographer, she shares her home with two fur babies: Lady Addison and Lola Belle.

Laura Silver is a third-generation Brooklynite whose Fort Greene connections include dancing on the main stage of BAM (as a community performer) with Mikhail Baryshnikov and attending numerous jazz shows at 966 Fulton. Silver is a middle school teacher, an author, and lover of the urban outdoors.

Celeste Staton is a proud Brooklyn native, community activist, and founding member of the Intergenerational Community Arts Council  (ICAC). She is currently the President of the Atlantic Terminal Tenants Association, serves on Community Board 2, and is involved in multiple community organizations.

Suzanne Vera is a mother, educator, artist and dedicated community member of Fort Greene; living in and teaching its youth for the past 20 years. She and her daughter, Asha, can be found most days out and about in the neighborhood with friends and enjoying its beauty.

Veronica White is a multi-instrumentalist/multi-media artist. She enjoys working with children and trying new forms of expression.

Yazmany Arboleda (LEAD ARTIST) has spent the last decade activating communities around the world by co-creating large scale art projects that change their perceptions of reality and public space. This means organizing a group of more than 150 artists and activists to hand out ten-thousand biodegradable pink balloons to adults in downtown Kabul, Afghanistan; bringing Muslims and Christians together all over Kenya to paint 16 houses of worship yellow in the name of love and unity; and pouring pink paint out of 9 abandoned buildings with other activists to bring attention to the housing and homeless crisis in the Central Business District of Johannesburg, South Africa. At the heart of his practice is the idea that art is a verb, not a noun.

Nia I'man Smith is the proud daughter of Linda Ann and Tony Smith, sister to Malik Nealy and Hasan Lyons, and great-niece of Essie Nealy Manning. She is a proud Oakland, CA native but calls Bed-Stuy home. Nia is the Community Engagement Associate at BRIC.

Yosef Alexander, also known as “Yos,” is a filmmaker, educator and a multi-media professional. He is a teaching artist and Media Share mentor at BRIC, a proud dad, and Brooklyn native.

Jessica Sucher is a creative producer dedicated to building community through arts and culture. She has lived in Clinton Hill since 2001, and is grateful that her commute to work includes a walk through Fort Greene Park. Jessica is the Associate Director of Community Engagment at BRIC. 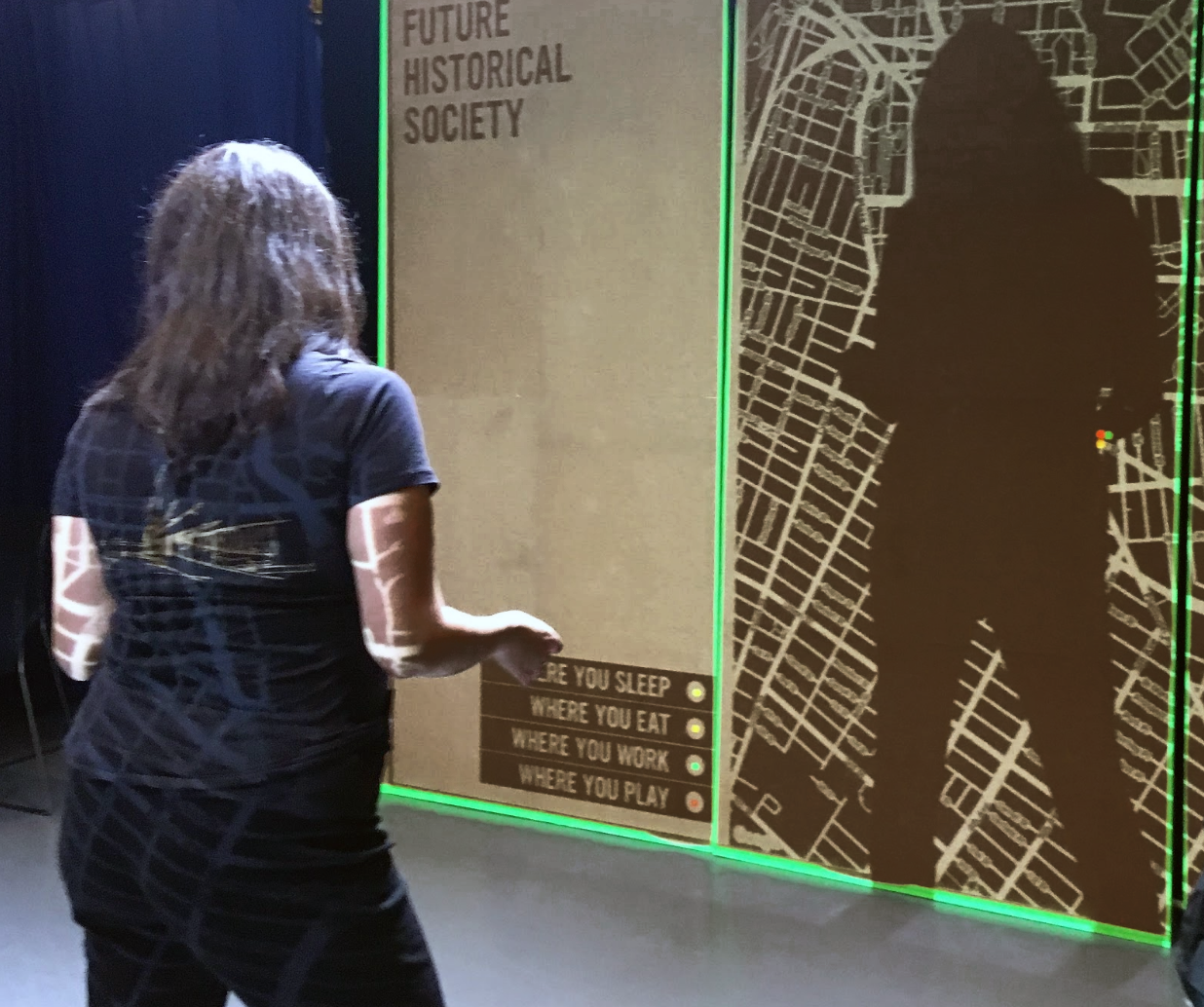