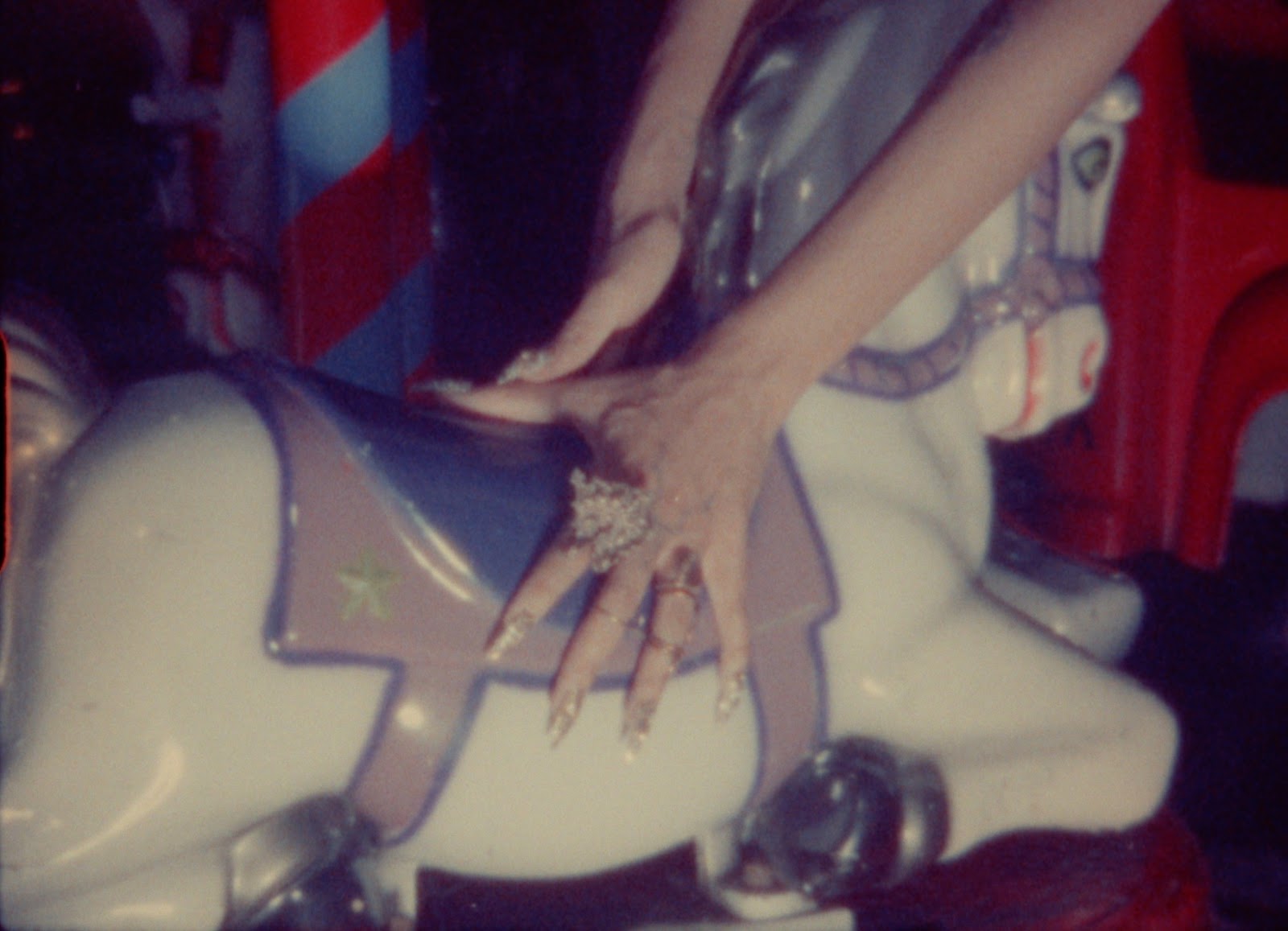 (BROOKLYN, NY — December 7, 2022) -- BRIC, a leading, multi-disciplinary arts and media institution anchored in downtown Brooklyn, is pleased to present When I am Empty Please Dispose of Me Properly, a group exhibition curated by Jenny Gerow, BRIC Curator, Contemporary Art. When I am Empty brings together the works of seven artists, Ayanna Dozier, Ilana Harris-Babou, Meena Hasan, Lucia Hierro, Catherine Opie, Chuck Ramirez, and Pacifico Silano, who explore the dominant myths of the American dream that govern and shape our personal narratives. When I am Empty Please Dispose of Me Properly is on view at BRIC House (647 Fulton St.) in the Main Gallery from January 26 to April 30, 2023, with an opening reception on Wednesday, January 25, from 7:00 - 9:00 pm. To attend the opening reception, please RSVP.

The artists in When I am Empty create viable tools for new meaning-making in contemporary art by applying advertising strategies, regenerating the want and desire inherent to the mediums of photography and video. The exhibition's title comes from Chuck Ramirez’s photograph WHATACUP, 2002, which enlarges an empty plastic fast-food beverage cup to bodily proportions, revealing a prompt from the manufacturer “When I am empty please dispose of me properly.” The empty cup and phrase take on a new meaning, drawing attention to the spent, drained state of Americans both physically and mentally. The words also point to the inherent disposability of cheap, mass-produced goods and the larger structures and systems that belie economic mobility and how people are valued in our society. The works in this exhibition reveal that while the desire manufactured by advertising is pervasive and false, there is a desire and need for untangling and reimagining America's obsession with the dream of upward mobility and economic freedom.

Keys to this reimagining of our shared American dream is the artwork’s ability to show the intertwined nature of desire and sadness as well as the emotive potential of the personal, a seduction of the real lived experience. The artists’ coyly use this seduction with some of the more complex and complicated ideals of economic and political freedom in the United States. Like a bad relationship allowing for these ideas to live in one vessel allows for a highly desirous courtship that will most likely end in a deep well of sadness. This effort to fill up is in direct contrast to the emptying of nuance or flattening of identities and desires that often occurs in our divided political parties.

Pacifico Silano and Catherine Opie utilize photography as a tool to explore their respective communities. Silano re-examines queer visual culture at the height of the HIV/AIDS epidemic through rephotographing, selecting, cutting, and overlapping enlarged images of Anglo-American masculine stereotypes, such as the cowboy and the biker, from vintage gay men’s magazines. Through this act, he addresses these normative tropes in order to create new narratives of deep desire missing from the archive and of lives lost. In her swamp photographs, Opie captures what appears to be an untamable rugged frontier that has been the center of political concern and rhetoric around “draining the swamp” in Washington, D.C. Manifesting an actual swamp that is in danger due to climate change, the rhetoric changes and can be viewed as a real threat to the people and ecology that inhabit the landscape.

Chuck Ramirez and Lucia Hierro create works that focus on consumable goods rendered in photographs and reproductions in larger-than-life proportions. Ramirez’s photographs explore the want and desire inherent in consumables and his identity as a Latinx gay male living with HIV. At the same time, Lucia Hierro’s mattress sculptures are printed with gig economy delivery drivers, removed from the bike, the precarity of their bodies can be seen within the larger context of desire for economic freedom.

Ilana Harris-Babou and Ayanna Dozier use film as a tool to connect personal stories to larger ideas. In her film Leaf of Life, Harris-Babou uses humor to confront the notion that hard work will lead to upward mobility and economic freedom. The film centers around a conversation with her sister at Bellevue Hospital during the height of the COVID-19 pandemic about her experience with self proclaimed herbalist and healer Dr. Sebi, his idea about cellular nutrition, and larger wellness narratives. Meanwhile, Forever Your Girl (working title), Dozier’s Super 8 film and autoethnographic sound score, is a meditation on the personal desire for control and the longing of soft femininity.

First-generation Pakistani-American artist Meena Hasan, hollows out the myth of ‘made in America’ by using Chintz fabric motifs on flags that also feature the ancient Indian game gyan chauper or snakes and ladders. A board game that rewards the overcoming of hurdles towards moral good is shown within the context of global manufacturing, this new game reveals a flag that symbolizes a co-option of culture with an end goal of global trade and domination.

When I am Empty will be on view during the same exhibition cycle as Buzz Slutzky: For Example curated by BRIC Curatorial Associate Maria McCarthy in BRIC’s Project Room. Public programming associated with the exhibitions will be announced at a later date – check BRIC’s website and social media for updates.

“Advertising feels more omnipresent than ever with our daily lives happening more and more online. This exhibition provides a perfect opportunity to explore how artists use the language of advertising to their own ends. BRIC’s exhibitions are always interested in tackling both political and social issues from the vantage point of artists. With the rising prices of consumable goods these items take on a new relevance due to this crisis. I am excited by the vibrant potential of these artworks to question what is our personal agency within these forms of commerce.”

Ilana Harris-Babou (she/her) Born and based in Brooklyn, NY
Harris-Babou has had solo shows at the Museum of Arts and Design, Open Source Gallery, and The High Line, all NY; Art Space, New Haven, CT; the Institute of Contemporary Art Chattanooga, TN; the Flint Institute of Arts, MI; Vox Populi Gallery, Philadelphia, PA; the Jacob Lawrence Gallery, Seattle, WA; and Kunsthaus Hamburg, Germany. She has exhibited in group shows at the Whitney Museum of American Art, the Jewish Museum, the Queens Museum, The Studio Museum in Harlem, and SculptureCenter, all NY; BRIC and The Chimney NYC, both Brooklyn, NY; The Aldrich Contemporary Art Museum, Ridgefield, CT; the de Young Museum, San Francisco, CA; and the Bernard A. Zuckerman Museum of Art, Kennesaw, GA. Harris-Babou has also shown internationally, at Kunsthalle Charlottenberg, Copenhagen, Denmark; West Space, Melbourne, Australia; Warehouse421, Abu Dhabi, UAE; Organ Vida, Zagreb, Croatia; Chiesa di San Giuseppe, Italy; La Casa Encendida, Madrid, Spain; Laundry Arts, London, UK; and Le Doc, Paris, France. The artist has had residencies and fellowships at BRIC, the Whitney Museum of American Art Education Department, the Museum of Arts and Design, Triangle Arts Foundation, Pioneer Works, and Creative Exchange at the Portland Institute for Contemporary Art. Her work is in the Whitney Museum of American Art collection. She is an Assistant Professor of Art and Luther Gregg Sullivan Fellow in Art at Wesleyan University in Middletown, CT. Harris-Babou received a BA from Yale University and an MFA from the Columbia University School of the Arts.

Pacifico Silano (he/him) Born in Brooklyn, NY; based in New York, NY
Silano has had solo exhibitions at The Bronx Museum of the Arts’ The Block Gallery and Island, both NY; Houston Center for Photography, TX; Melanie Flood Projects, Portland, OR; Monti 8, Latina, Italy; and The Eye Sees, Arles, France. He has exhibited in group shows including those at The Bronx Museum of The Arts and the International Center of Photography, both NY; The Andy Warhol Museum and Future Tenant, both Pittsburgh, PA; Transformer, Washington D.C.; Musée de l’Elysée, Lausanne, Switzerland; and Somerset House, London, UK. Silano has received awards including The Paris Photo / Aperture Foundation Shortlist for First Book Prize; the Rencontres d’Arles Book Award Shortlist for Artist Book of the Year; The Silver List, Silver Eye Center for Photography; and The Black List, Carnegie Mellon. He has had residencies at Silver Art Projects Studio; the Bronx Museum of the Arts, AIM AT 80 White Street; the Lower East Side Printshop, Key Holder Residency; Light Work; and Baxter Street, CCNY, as well as fellowships at BRIC and the New York Foundation of The Arts. His work resides in the collections of The Museum of Modern Art, the International Center of Photography, Musée de l’Elysée, the Ruth and Elmer Wellin Museum of Art, the Ellsworth Kelly Foundation, and the San Francisco Museum of Modern Art Library, among others. Silano received a BFA from the Pennsylvania College of Art & Design and an MFA from the School of Visual Arts.

ABOUT BRIC
BRIC is a leading arts and media institution anchored in Downtown Brooklyn whose work spans contemporary visual and performing arts, media, and civic action. For over forty years, BRIC has shaped Brooklyn's cultural and media landscape by presenting and incubating artists, creators, students, and media makers. As a creative catalyst for our community, we ignite learning in people of all ages and centralize diverse voices that take risks and drive culture forward. BRIC is building Brooklyn's creative future. Learn more at bricartsmedia.org.