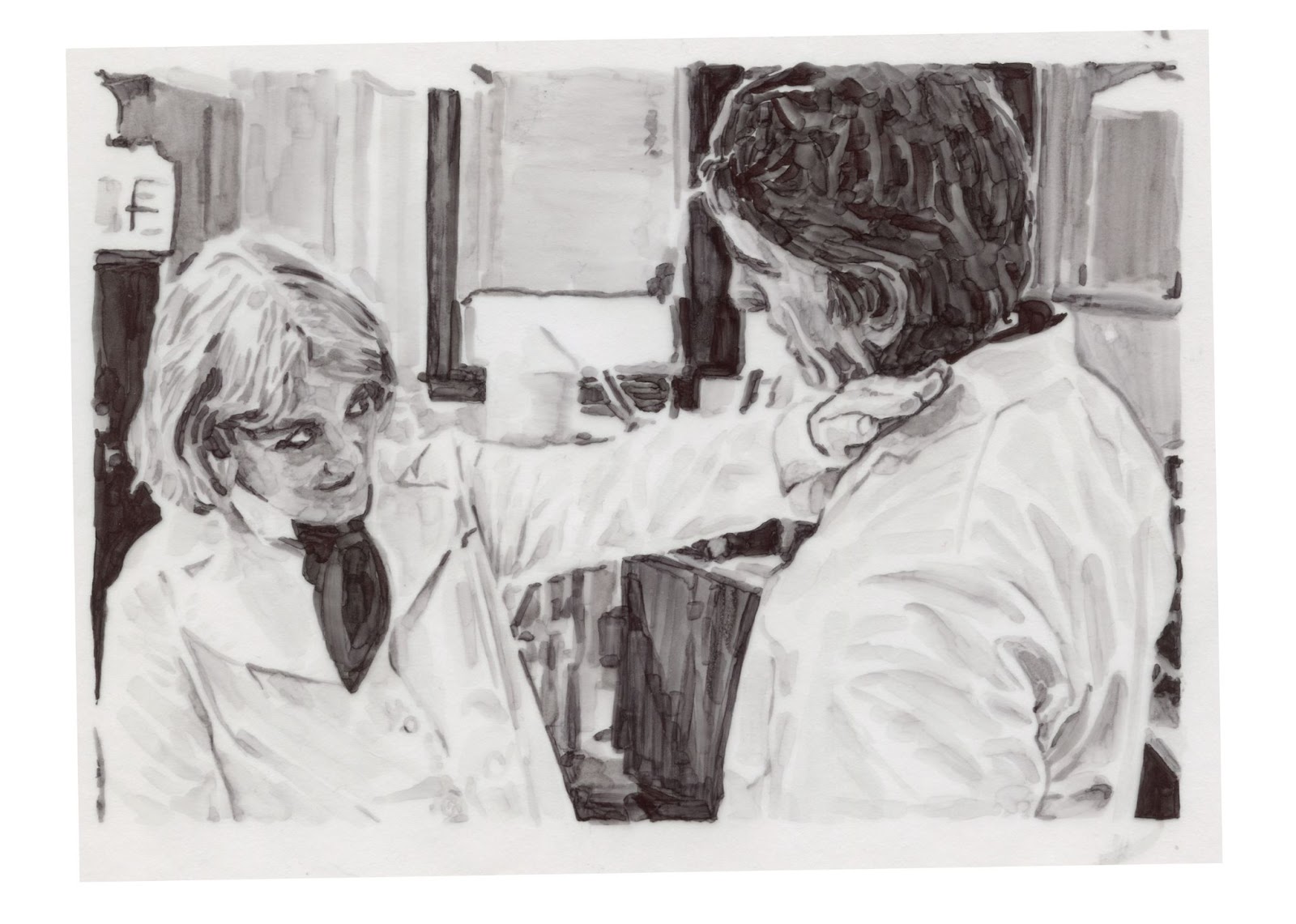 Buzz Slutzky, Detail from Manual Power #7, 2015-22, Marker on vellum
Courtesy of the artist and BRIC

(BROOKLYN, NY —  December 7, 2022) -- BRIC, a leading, multi-disciplinary arts and media institution anchored in downtown Brooklyn, is pleased to present Buzz Slutzky: For Example, Slutzky’s first solo exhibition. For Example is part of the artist’s ongoing investigation into the relationship between mark- and meaning-making and inherited knowledge. It brings together a new series of drawings and paintings with an updated essay film originally created during Slutzky’s time as a 2021-2022 BRIClab Video Art artist-in-residence. Buzz Slutzky: For Example is on view at BRIC House (647 Fulton St.) in the Project Room from January 26 to April 30, 2023, with an opening reception on Wednesday, January 25, from 7:00 - 9:00 pm. To attend the opening reception, please RSVP.

From Latin exemplum "a sample, specimen; image, portrait; pattern, model, precedent; a warning example, one that serves as a warning," literally "that which is taken out". (Online Etymology Dictionary)

For Example plays with two definitions of the word “example”: the power one has over another and the process of using a person or object as a reference point. Using historical and autobiographical source materials such as instructional manuals, visual arts textbooks, interior design catalogs, and family scrapbooks, Slutzky explores the role of the photographic image in didactic instruction and aesthetics of authority, while at the same time abstracting the original image. The reference materials have direct and indirect connections to Slutzky’s family, for instance, the 1977 self-defense manual, Looking Forward to Being Attacked: Self-Protection for Every Woman, a book purchased by the artist’s mother, and a sculpture textbook that was passed down from the artist’s grandmother, Sylvia “Syb” Wolens, who was also an artist. Other reference materials, like mid-century modern furniture catalogs, and photo albums filled with portraits of family members, are reminiscent of Slutzky’s childhood and their ancestors. These sources are tools for learning and knowing, but in the artist’s hands, a question emerges: how does their meaning change when they change hands?

By drawing and painting photographs from the past, Slutzky mediates the socio-cultural and personal relevance of these images across time. Slutzky’s use of white color pencil on black paper inverts the ubiquity of black ink printed on white pages, and their use of transparent vellum suggests that there is more to the story than the so-called ‘reality’ of a photograph. The works that result are not merely copies of the original photographs, but amalgamations of the marks the artist makes.

In addition to the drawings, Slutzky will present One Shorter than the Other, an essay film that looks at the maternal line of their family focusing primarily on Grandma Syb, who due to a mysterious accident had one arm that was four inches shorter than the other. The film weaves together memories from Buzz and their mother, Syb’s daughter, to paint a portrait of how having a shorter arm affected Syb’s life, views on how one should carry their body, and the impact on her children and grandchildren. The film explores and questions family narratives, socialization, and the degree to which our decisions and instincts are inherited.

"Buzz Slutzky reframes inherited modes of learning, knowing, and being to remind us that the past, like the present, is both a time and a place. For Example is, in many ways, a reckoning between the stories we are told, and the stories we choose to tell."

"I started this series thinking about the weirdness of instructional photographs, and how their meaning changes out of context. The power of juxtaposition in filmmaking is that the meaning created by two images can be interpreted by the audience. My recent work asks how each medium of drawing, painting, and film can play with meaning making through themes of instruction, ancestry, trauma, intuition, and positioning the body."

Buzz Slutzky (they/them) is a non-binary/transgender and Jewish multidisciplinary artist. They have participated in group exhibitions at the Brooklyn Museum, the Leslie-Lohman Museum of Art, Assembly Room, La MaMa, the 41 Cooper Gallery at Cooper Union, and at Dixon Place, all NY; the Institute of Contemporary Art, Philadelphia and Haverford College, both PA; Boston Center for the Arts, MA; Maryland Institute College of Art; and Columbia College, Chicago, IL. Slutzky has also participated in MIX NYC and the Frameline Film Festival. They contributed to the 2021 anthology, We Are the Baby-Sitters Club: Essays and Artwork from Grown-Up Readers, published by the Chicago Review Press. Slutzky was a 2021-22 BRIClab: Video Art resident, and has also had residencies at MacDowell, the Vermont Studio Center, and NARS Foundation. They currently teach at the School of Media Studies at The New School. Slutzky received a BA from Sarah Lawrence College and an MFA in Fine Arts from Parsons School of Design.

BRIClab: Video Art is a year-long residency for professional, local visual artists who have a desire to explore video and audio as distinct mediums, or as part of an interdisciplinary practice.  Previously known as the Media Arts Fellowship, the program has offered equipment, classes, and studio/editing facilities to local artists for over two decades. Each year, a BRIClab: Video Art resident is selected for a spring Project Room solo exhibition. To learn more about the BRIClab: Video Art program, visit bricartsmedia.org/briclab-video-art.

BRIC is a leading arts and media institution anchored in Downtown Brooklyn whose work spans contemporary visual and performing arts, media, and civic action. For over forty years, BRIC has shaped Brooklyn's cultural and media landscape by presenting and incubating artists, creators, students, and media makers. As a creative catalyst for our community, we ignite learning in people of all ages and centralize diverse voices that take risks and drive culture forward. BRIC is building Brooklyn's creative future. Learn more at bricartsmedia.org.