Join BRIC on October 20, 21, and 22 for our eighth annual BRIC JazzFest! This acclaimed marathon Jazz festival, which is one of BRIC's premiere performing arts programs, will take place across three days and two stages.

The 2022 BRIC JazzFest lineup brings together jazz world legends, rising stars, and emerging musical geniuses at BRIC House in Downtown Brooklyn. These artists are pushing the boundaries of the jazz genre, some through the lens and influence of hip hop and others through a musical style all their own. 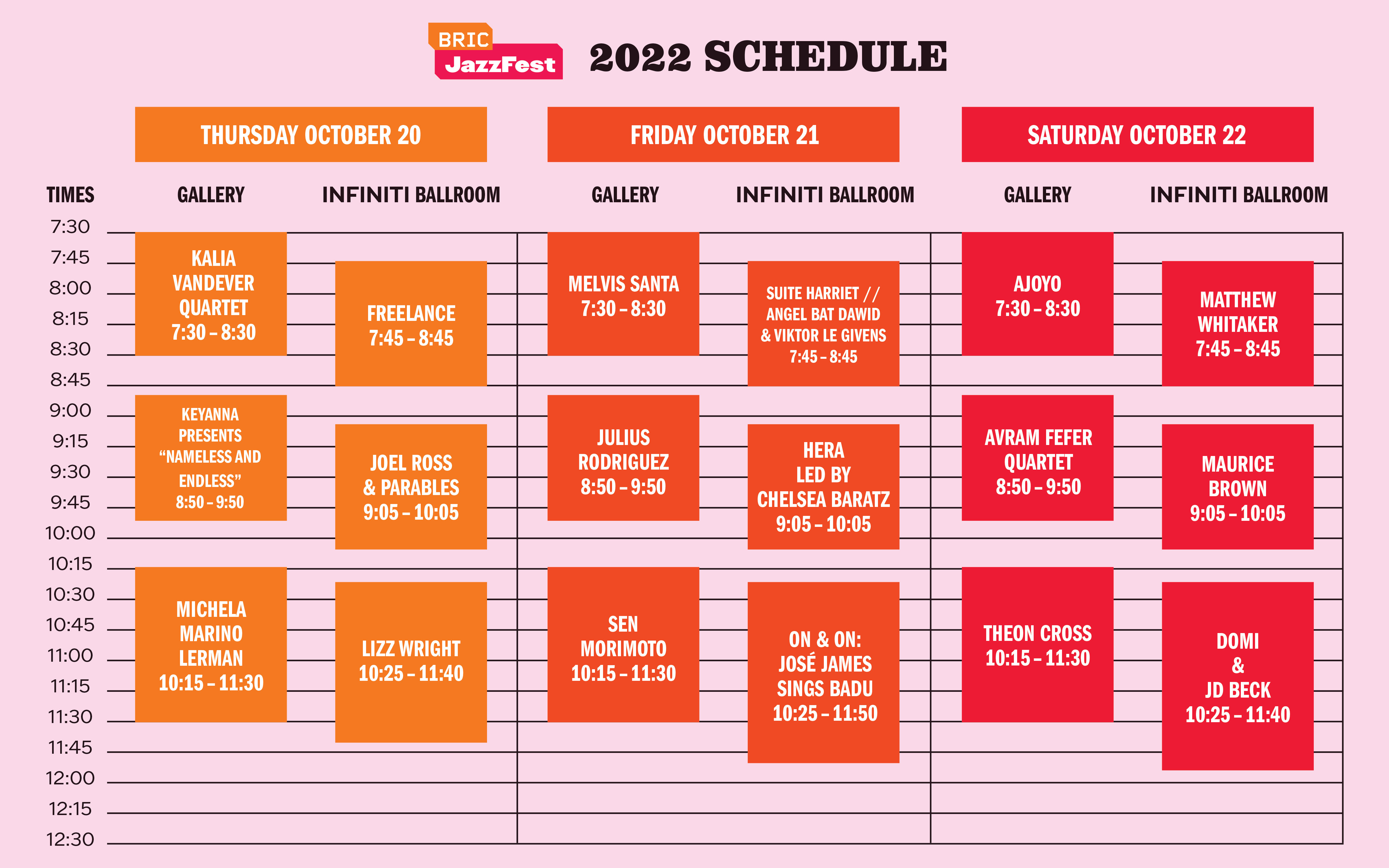 To inquire about discounts for groups of 10 or more, please email Benno Orlinsky at borlinsky@bricartsmedia.org.

A steward of American music, acclaimed vocalist Lizz Wright is rising out of the pandemic and returning to stages across the globe. She has reclaimed her legacy with the launch of an independent record company, Blues & Greens Records. Wright’s label launched with the June 15, 2022 release of Holding Space, a brilliant live album capturing a Berlin, Germany concert where Wright and her band closed out their 2018 European summer tour.

The Chicago-born, Brooklyn-based vibraphonist Joel Ross is a sophisticated jazz performer with a sound steeped in the post-bop tradition. A protégé of Stefon Harris, Ross initially gained attention as a sideman with Marquis Hill and Makaya McCraven before releasing his 2019 debut Blue Note album, Kingmaker. Along with his work as a member of Walter Smith III and Matthew Stevens' In Common band, he has continued to deliver ever more ambitious albums, including 2020's Who Are You? and 2022's The Parable of the Poet.

Michela Marino Lerman, winner of the 2019 Hoofer Award, is a globally sought after tap dance artist, performer, choreographer, band leader, educator and all-around creative spirit. The Huffington Post has called her a “hurricane of rhythm” and the NY Times has called her both a “prodigy” and has described her dancing as “flashes of brilliance.” Michela has performed, choreographed, written,  produced, and directed many projects throughout her career including leading her own group Love Movement.  She recently was commissioned by the Joyce Theater to create and premiere her all new full length work “Once Upon A Time Called Now” in the spring of 2022.

Freelance is a Harlem-based collective and band of independent leaders with an expansive sound and encyclopedic knowledge of musical genres that afford them the ability to cross-pollinate styles and manipulate melody to create an aesthetic signature uniquely their own. The band features an all-star lineup founding leaders Smithsoneon (vocals) and Ausar the Ambassador (keyboards) along with Craig Hill (saxophone), Yasser Tejeda (guitar) and David “Dj” Ginyard (bass) and Justin Tyson (drums). The band has shared the stage with Grammy Award winning artists such as Robert Glasper, Solange, Estelle, Esperanza Spalding, Terence Blanchard, Bilal, Terrace Martin, Lalah Hathaway, and more.

Kalia Vandever is a trombonist, composer, and educator living in Brooklyn, NY. She released her debut album, "In Bloom" in 2019 which has been described as "the rise of an exciting voice for the music" (Seton Hawkins, Hot House Jazz Magazine). Kalia's sophomore album, Regrowth released in May, 2022 on New Amsterdam Records and "confirms her strengths as a composer and bandleader with a distinctly contemporary point of view." (Nate Chinen, WBGO Jazz)

Kalia received her Bachelor of Music degree in Jazz Studies at the Juilliard School in 2017.  She has toured and performed internationally with her quartet, as well as a side-woman, performing with artists including Moses Sumney, Joel Ross, Immanuel Wilkins, Maria Grand, Fay Victor and others. Kalia is an awardee of the 2022 Next Jazz Legacy, a program founded by New Music USA and the Berklee Institute of Jazz and Gender Justice.

K3YANNA (fka Keyanna Hutchinson) is an intuitively taught guitarist, composer, and producer from Brooklyn, New York. As a musician they display their knowledge of various music genres including  R&B, funk, rock, folk, Hip-Hop, jazz, etc. Primarily as a solo guitarist, her career has led her to notable collaborations with the artist H.E.R. , Marzz, Lizz Wright, Kim Burse, Pyer Moss, and many others. As a solo artist she utilizes her knowledge of sound, virtuosity on the guitar, and her ever-expanding and personal spiritual journey as the breeding ground for her musical creations. Keyanna is an awardee of the 2022 Next Jazz Legacy, a program founded by New Music USA and the Berklee Institute of Jazz and Gender Justice.

On & On: José James sings Badu

A jazz artist for the hip-hop generation, José James artfully blurs the lines between traditional and contemporary jazz, hip-hop, soul, funk, pop and rock. James throws down the gauntlet on the past 100 years of jazz singing while charting a path forward for the culture.

In his new project On & On: José James sings the music of Erykah Badu. “It’s simple,” James explains. “Jazz singing has always been about interpreting the highest level of standards of your time. And for my generation, Erykah Badu has been one of the most innovative and incisive songwriters. Her work has proven to be groundbreaking in a social, musical and artistic sense.”

Named after the Olympian queen of the gods, HERA brings ground-breaking women artists & bandleaders together to showcase original works in a space where every band member can wear her crown. Every musician at a HERA show has her own band, her own original music, and her own sound. These women hold court over many styles, making genre-bending music that crosses scenes and borders alike. HERA's mission is to bring the perspectives of strong, innovative creators together and explore new, re-imagined possibilities in music.

Angel Bat Dawid is a Black American composer, improviser, clarinetist, pianist, vocalist, educator, and DJ. As a descendant of ministers, philanthropists, and prophets Angel continues her ancestral legacy through sound and performance.

There is magic, reverence, and mystery in the spaces, objects, and writings of Viktor Le Givens, a multimodal performance artist whose practice centers around the gathering and arrangement of ancestral objects to recontextualize the seemingly mundane into the spectacularly sacred to activate spaces for site-specific public rituals.

Sen Morimoto is a Japanese American singer / multi-instrumentalist and producer based in Chicago. His mix of jazz and hip-hop production, spoken-word rap and pop sensibilities form a super-genre of modern songwriting and experimental grooves.

“Sen Morimoto’s forthcoming self-titled LP is sure to make best-of lists…masterfully blends his disparate influences together, from jazz, hip-hop, and experimental music, into one futuristic and exciting combination.”  – VICE

Multi-instrumentalist and composer Julius Rodriguez has crafted his artistry inside a range of sounds and styles. At 23, the Westchester native bonds a deep sense of history with an appetite for the unknown. He performs regularly as a leader across New York City, and his contributions on piano, drums, synthesizer and electric bass appear on a diverse roster of recordings, including releases from Kassa Overall, Carmen Lundy, Brasstracks, Morgan Guerin, J. D. Walter and Damien Sneed, among other critically acclaimed genre-defiant voices.   Sharp instincts for space and phrasing, and reverence for melody elevate Julius’ expression from virtuoso to true artist.

Singer, composer, pianist, Afro Cuban dancer, actress, and educator Melvis Santa made a splash on the Cuban musical scene at the age of 14 when she founded the collective vocal group Sexto Sentido. Based in New York since 2014, she continues to make a mark as a performer and educator. Melvis has collaborated with greats such as Roman Diaz, Ravi Coltrane, Steve Coleman, David Virelles, Gilles Peterson and Havana Cultura plus many more.

To date, if you wanted to learn about DOMi & JD BECK—the most hyped jazz duo—you had to visit their website, click a rat playing saxophone, and read a story about a 12-year-old physicist (DOMi Louna) and a 6-year-old sheep investigator (JD Beck). Let’s fix that. “My philosophy of life is don’t take shit too seriously,” says DOMi Louna, born Domitille Degalle. And that’s fair. But the vibrant world she and her collaborator have given us demands exploration. Their long-awaited debut album—which will be released by Anderson .Paak’s new label APESHIT in partnership with the legendary jazz label Blue Note Records—is an attempt to bottle their goofy, very virtuosic magic. Their music finds both humor and greatness in harmonic complexity and rhythmic shiftiness, abruptly adopting and ditching tempos, toying with time signatures, and sneaking extra beats into bridges. Along the ride, DOMi & JD BECK have sat in with Herbie Hancock and backed Thundercat, Ariana Grande, Mac DeMarco, Eric André, and more. They also co-wrote “Skate” on .Paak’s GRAMMY-winning album with Bruno Mars as Silk Sonic.

Theon Cross is an award-winning tuba player and composer.  He is a key component of London’s thriving jazz scene and his unique sound has been described as ‘innovative’ and hailed for ‘reinventing the tuba.’ His debut EP Aspirations brought him international attention and garnered a Jazz FM nomination for best Jazz Newcomer in 2016. In 2019 he released his debut album Fyah, which was met with critical acclaim worldwide charting at no. 1 on the UK official Jazz & Blues charts, no.23 on the US Jazz Billboard, and garnering high praise from major publications such as Rolling Stone Magazine, Pitchfork, The New York Times, The Guardian and NPR. His latest album, Intra-I (meaning ‘Within Self’) syntheses the diversity of his musical art and experience to deliver an essential message to a world gripped by tribulation. Across ten sonically divergent and bass-rich tracks, Intra-I explores themes of self-reliance, origins, identity and more.

At 21-years-old, multi-instrumentalist Matthew Whitaker has come a long way to get where he is today, overcoming adversity and dedicating countless hours to honing his craft. Whitaker's musical identity is one filled with deepening confidence, rhythmic vigor, and a marked melodic clarity. Dramatic entrances have become an aspect of his musical approach. Whether on piano, Hammond organ, Fender Rhodes or synthesizer, he doesn’t kick off a tune or improvisation as much as plunge into the music, twisting time and navigating structural shifts with fluidity.

Intrepid saxophonist and composer Avram Fefer has been an important contributor to the adventurous New York scene for the past quarter-century, having collaborated with Bobby Few, Archie Shepp, the Last Poets, Sunny Murray, Tony Allen, Roy Campbell and many others. His two latest quartet albums - Testament and Juba Lee - highlight his global melodic and rhythmic sensibilities and feature the searing guitar work of Marc Ribot.

Joining him for BRIC JazzFest are three of the finest improvising musicians of their generation: Brandon Ross, the guitarist who spent years with Cassandra Wilson and Henry Threadgill and co-founded the power jazz trio, Harriet Tubman; bassist Gregg August, known for his Grammy-nominated Dialogues on Race, and his work with J.D. Allen, and drummer Chad Taylor, a co-founder of the Chicago Underground ensembles and the percussive choice for musicians like Pharoah Sanders, Peter Brötzmann and Jamie Branch.