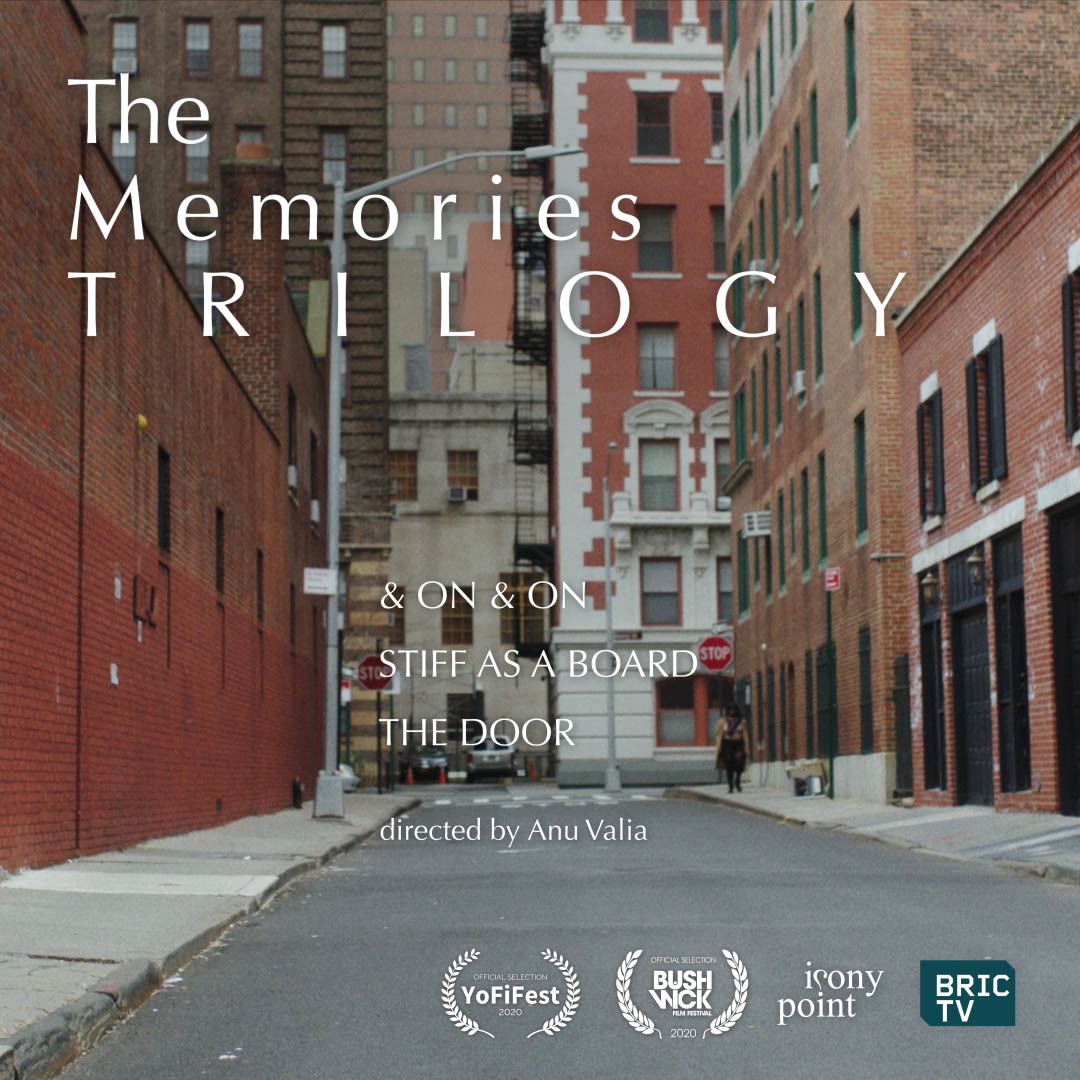 BROOKLYN, NY, March 15, 2022 – BRIC TV, the Emmy Award-winning, nonprofit cable television channel and digital network announces the premiere of a three-part scripted series called The Memories Trilogy. Over the span of two days, each short film will explore how humans process loss, shock, and grief. During this critical time in the world, with the pandemic, unnatural disasters, politics, and looming wars, this scripted series will reveal how characters respond to their own small and large tragedies.

“The Memories Trilogy is a beautiful illustration of humanity and loss,” said Kuye Youngblood, BRIC TV General Manager. “This  film series by Anu Valia is a reminder that trauma can impact anyone and has a rippling effect on those around us. It’s especially apt given current events. Anu is a prolific filmmaker whose career spans both Hollywood studio and independent film projects. BRIC TV is proud to bring her vision to the screen.”

“BRIC has supported me as an artist when I felt it would be near impossible to get my projects off the ground” said Anu Valia, Writer/Director of The Memories Trilogy. “They've stood by me and encouraged me as I've spent more than a year editing my films. BRIC is an essential organization for New York artists. They've helped so many of us continue our craft & use our voices. I'm so grateful for their support and will be a lifelong supporter of theirs as well,”

Series Description
The Memories Trilogy explores small, life-shifting moments in a person's life. Sometimes the tiniest things will have an everlasting ripple in the course of your life. It is not just big events that can change you, but little moments.

Part One: “& On & On”
In the span of two days, we meet a woman who's been mugged, a mother who desperately needs help, a wife who's holding a terrible secret, and a daughter who has a lot of questions. These shorts unfold "in the round", with one character passing the baton off to their supporting character for their story. And on and on we go. Starring Sarah Goldberg, Luke Forbes, Janali Thomas, Catherine Curtin, Isabelle Barbier and David Beach.

Part Two: “Stiff As A Board”
Three young children explore questions around death during what starts off as a normal play date. Starring Janali Thomas, Parker Sevak and Hailey Clairese Stone.

Part Three: “The Door”
Parents of a young boy become frantic when they’ve discovered he’s locked himself in his room without explanation. Starring Samrat Chakrabarti, Pooja Kumar, and Parker Sevak.

For more information on The Memories Trilogy, visit: https://www.bricartsmedia.org/tv-shows-videos/memories-trilogy

ABOUT BRIC:
We are a leading arts and media institution anchored in Downtown Brooklyn whose work spans contemporary visual and performing arts, media, and civic action. For over forty years, our institution has shaped Brooklyn's cultural and media landscape by presenting and incubating artists, creators, students, and media makers. As a creative catalyst for our community, we ignite learning in people of all ages and centralize diverse voices that take risks and drive culture forward. BRIC is Building Brooklyn's creative future.