There's only one free summer-long outdoor concert and performance series in New York City that has been presenting talent from around the world and around the block for more than 40 years: the BRIC Celebrate Brooklyn! Festival.

Unlike the multi-stage destination festival scene, the BRIC Celebrate Brooklyn! Festival is a free, summer-long experience allowing New Yorkers to come back again and again with their friends and family to appreciate or discover a new genre, acclaimed artist, or world culture each night of the Festival. During its 40-year run, the BRIC Celebrate Brooklyn! Festival has presented celebrated global music icons, legendary jazz artists, chart-topping indie bands, gravity-defying dance troupes, large-scale film projects and even a virtual reality performance, becoming one of the city's foremost cultural attractions and a beloved summer tradition.

This year, our beloved festival will be transformed into a virtual multi-platform destination designed to bring the spirit of the outdoor concert series to your home.

From its very first performance in summer of 1979, the mission of the Festival has been to bring Brooklyn together. These free experiences at the Prospect Park Bandshell enhance our quality of life and understanding of the world by illuminating the vibrant cultures that make our borough so unique. We believe it is especially important to use artistic platforms to reaffirm the very basis of what Brooklyn and America is—a welcoming, supercollider of ideas and cultures, informing and enriching each other.

The Festival is dedicated to nurturing and supporting new works from artists in all genres. Every year a small group of artists are selected to support in the development of new works. The commissioned projects are presented in the Festival's upcoming summer season. Previous commissions include work from Alloy Orchestra, BQE Project, Brave New World Repertory Theater, Sean Curran and many more.

Designed in 1865 by Frederick Law Olmsted and Calvert Vaux, Prospect Park was envisioned as the centerpiece of Brooklyn's cultural institutions that included the Brooklyn Museum of Art, Brooklyn Botanic Garden and Brooklyn Public Library. The Bandshell was added to the Park in 1939 to serve as a site for live outdoor entertainment.

At its inception, the Bandshell featured an acoustic shell, raised stage, public restrooms and a large circular plaza, and was the site of many popular concerts and dances such as in this circa 1953 photo. 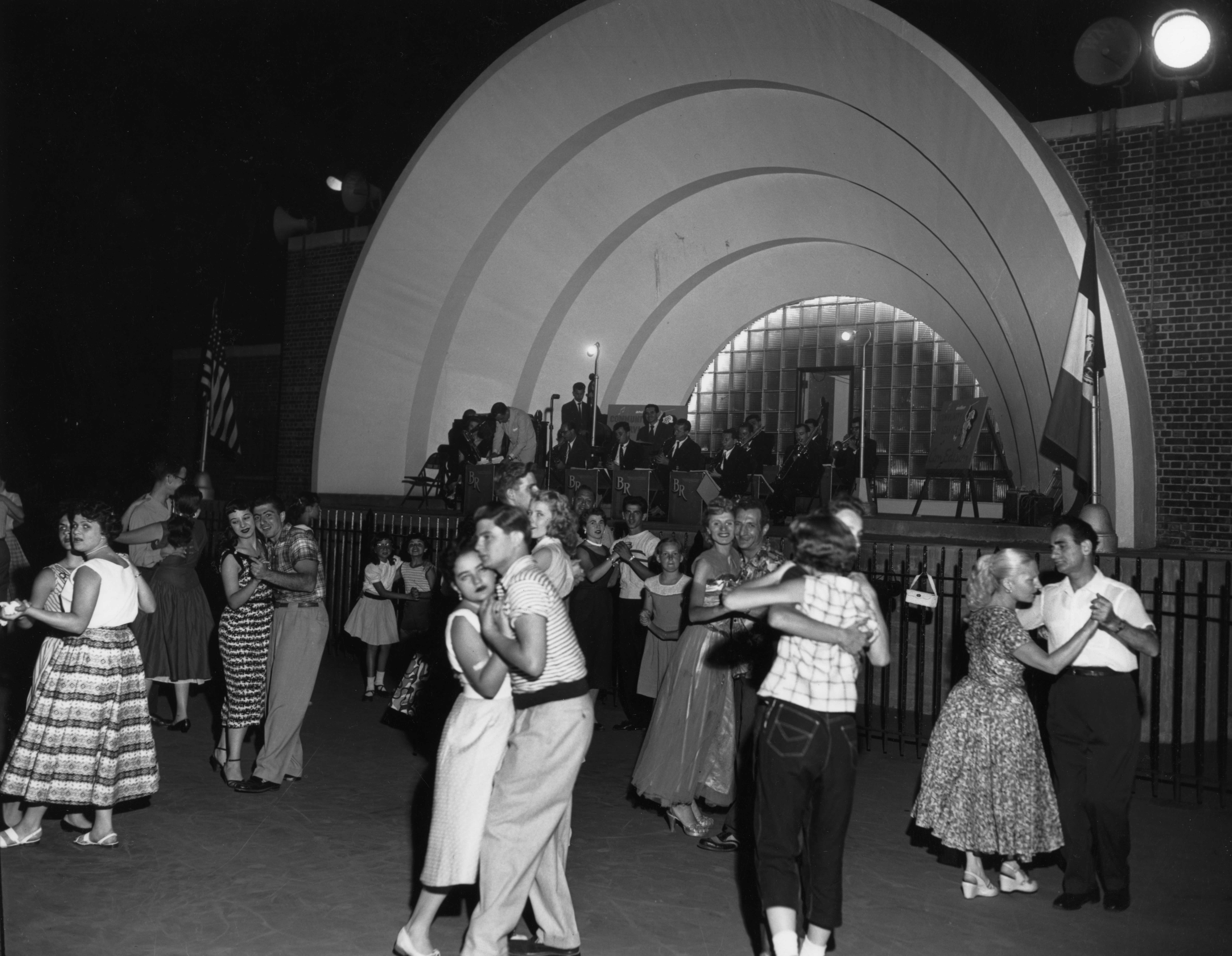 The Bandshell, as much of the Park (and many Northeast cities), suffered through the late sixties and seventies as budget cuts and the broader effects of urban neglect took its toll. The facility and the Park deteriorated and was perceived as unsafe as seen in this 1978 photo.

BRIC Celebrate Brooklyn! and the "New Prospect Park" (as it was then called), was founded in 1979, to reverse this trend by bringing people back to the Park via a series of exciting, accessible performances - many of which were held at night - a radical idea at the time. The first few seasons were filled with many of the Brooklyn's world famous jazz performers and New York City's emerging choreographers and presented on an expanded stage that featured some of the elements to be incorporated in the coming renovation of the Bandshell.

After devastating funding cuts in the early 1990's, BRIC Celebrate Brooklyn! was scaled back to as few as 16 performances in 1992. A new team was brought in to revive the program, and new focus was placed on pairing international artists with local talent. World music, America roots music, film, theater and spoken word programs were introduced and the number of performances increased again to 32 in 1995.

The renewed popularity of the program and problems associated with the large lighting and sound towers encouraged a plan for a second redesign and the Office of the Brooklyn Borough President funded a $3 million reconstruction which took place in 1998-99. Designed and managed by the Prospect Park Alliance, this project dismantled the three inappropriate towers which were responsible for sound bouncing back into the neighborhood; renovated the backstage areas; expanded public restrooms; re-graded the site for better viewing and drainage; added a new stage roof that facilitates rigging, lighting and projection for film and dance programs, and allows performances to go forward in inclement weather; and added a new "distributed" sound system which provide excellent sound quality while tightly directing the sound at the audience and away from other areas. The improved site and programming combine to allow BRIC Celebrate Brooklyn! to offer probably the finest outdoor performance experience in all of New York City.

All of this would not have been possible without support and encouragement from the New York City Department of Parks & Recreation and the Prospect Park Alliance. Prospect Park hosts hundreds of events annually, including concerts, sporting events, performing arts, festivals, and tours. For more information on Prospect Park, its programs and history, go to prospectpark.org.

For information about all New York City parks go to nyc.gov/parks.

The Festival’s unique 'Live Music for Film' program pairs extraordinary live performers with screenings of silent, animated and short films, enabling artists to create multi-media performances that span time and place with projections on NYC's largest outdoor screen. Artists/films have included Alloy Orchestra/Phantom of the Opera; Yo La Tengo/Sounds of Science; The Jazz Passengers/Creature From the Black Lagoon (in 3D); and Philip Glass & Kronos Quartet/Dracula.