Periodically, we review artist profiles in the BRIC Contemporary Artist Registry and select one of exceptional merit to feature. 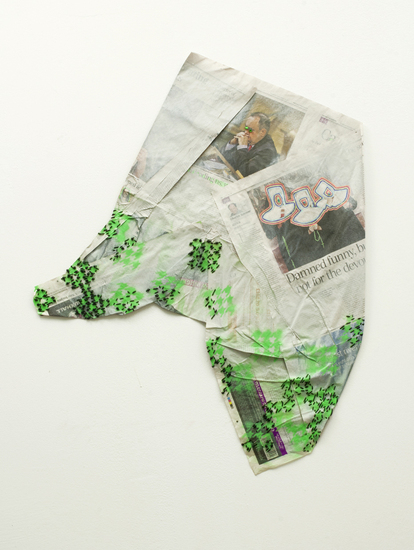 Artist Elissa Levy works in a studio near BRIC House in Downtown Brooklyn and lives in Manhattan. Her great appreciation for craft in contemporary art, owed in part to her background work in glass at the Rhode Island School of Design, thoughtfully merges an exploration of male icons and a process of experimentation with the materiality of newspaper. Commenting on the portrayal of power and masculinity in the media, Levy's artistic process involves reacting to pre-existing materials such as fabric and found newspapers. Levy has made printed media her primary material for art-making, attracted to its physicality and conceptual potential. Levy cuts, plasters, draws, tears, embroiders, and paints pages of newspapers to create flat sculptures that under cheerful neon colors, hide images of powerful men, yet simultaneously, emphasize these figures' projection of power and influence. We recently visited Levy at her studio and spoke with her about her practice.

You work from newspapers at a time when printed material is becoming increasingly rare in our society. What potential do newspapers have for you?

I am somewhat in denial about the disappearance of actual printed materials, so creating these "future relics" is more of a side effect for me. I am very object-oriented, thus this tangible thing that contains so many different worlds amazes me. To have an article on healthcare, opposite an article about the Ukraine, next to a Tiffany's ad, and a page away from an obituary can seem schizophrenic, but it's normal, it's how we live, and we take it in stride (mostly). It's so layered that it's primed for dissection. And being printed means it's the truth! When it's on the internet you just don't know.

How did you come to work in what you have described as a "punk DIY ethos" and why do you keep on working this way?

I grew up in the suburbs, so I feel like I have an affinity for that brand of punk – teenagers hiding in a bedroom and painting a band name on a t-shirt scrap, then safety pinning it to a leather jacket, razoring jeans, – that way of getting something to look right without trying too hard, or trying hard to get it perfectly disheveled! It's crafty in a completely accessible, but also personal way, where you make do with what you have, to express your truth. The other kind of crafty--kitsch crafty--doesn't feel personal to me. And as much as I respect and try to cultivate real skill, if it's overly emphasized, I feel like the work becomes too contained and loses some of its life.

Some of your recent work is concerned with representations of men in the printed media. Which aspects of masculinity are you more interested in exploring?

Looking at the media, I try to approach the figures in the way that people talk about dreams – everyone is you. So the men are reflective of aspects of my masculinity (or the audience's, whether male or female). We all have both parts, we are all implicated. Focusing on men in media puts us in the arena where power, authority, strength and the loss of these attributes, are in play. Additional aspects that I explore include control, shame, and death. 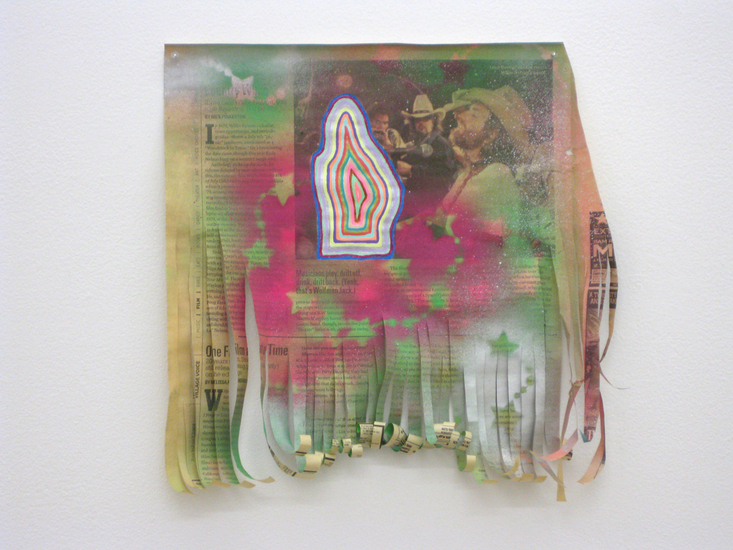 Do you see your deconstruction of images of powerful men as a feminist task, given that you devoid them of the power they hold and project through these images?

I'm not sure I can devoid them – I operate on the theory that no matter what you do to the image it still contains that information that it had when you started. I might be containing or softening it, but it doesn't go away. But often the images we see of powerful men are in the throes of having their power marred in real life. They hang their heads, or are escorted in the perp walk (although this isn't enough to take away their power, because they are still being featured (celebrated?) in the newspaper). As a feminist, I think it's important to look at the line that is commonly drawn, where masculinity is on one side and femininity is on the other, and think about what happens when you shove those separate sides towards each other.

Who's in control here? Me? I doubt it. But it's difficult to not want to reshape the media into what you want it to be. So much of the news is painful, is it really the artifact that we want left behind? Of course then it's rainbows and puppies, which sometimes makes the paper. My attempt to contain the action that occurs in the paper is on one hand supposed to be revealed as useless – I can't, but maybe I can make something poignant happen in the process.

How does your experience as a curator influence your art?

Mostly, curating helps me to think about what I find compelling in art. I have one side of me that wants to look at art that is so different than mine, that I am attracted to but don't really know how the artist got there. But more commonly, I look at work that has some overlap with my own, since it's already about something I'm interested in. Why not get more information? I guess in that way you have conversation, and eventually, a community of like-minded artists.

How do you think working in Brooklyn affects your work?

Working in the studio can be really solitary, so it's great to be in an urban environment. I love being able to go to neighborhood fabric & crafts stores that are visited by all different people, and to look at random stuff on the street. Some of my latest work, while I started it on a residency in rural Scotland, was influenced by my local newspaper stand having been demolished in a rainstorm. 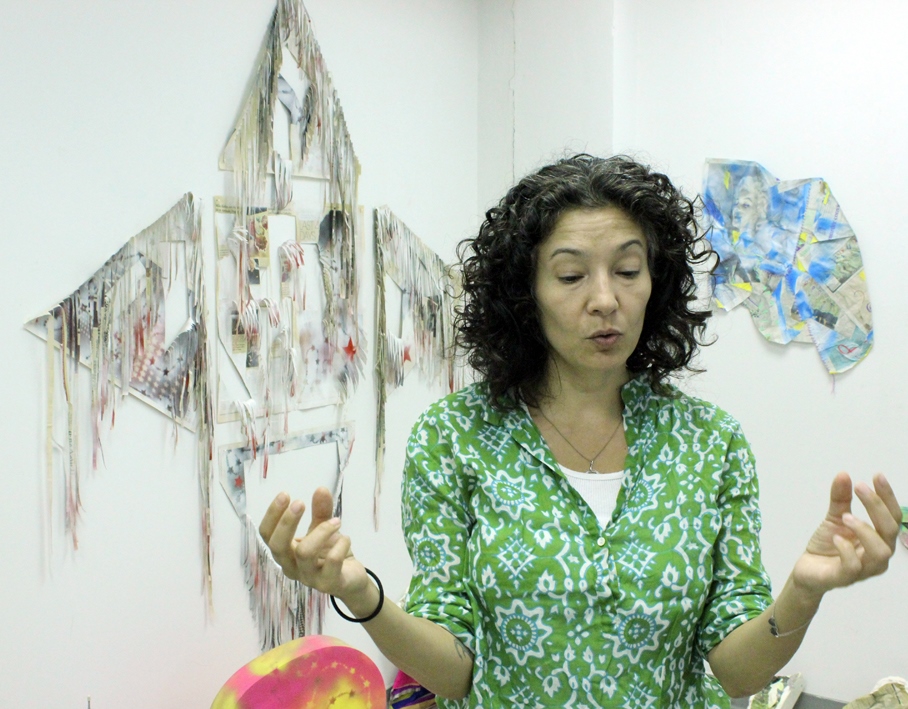