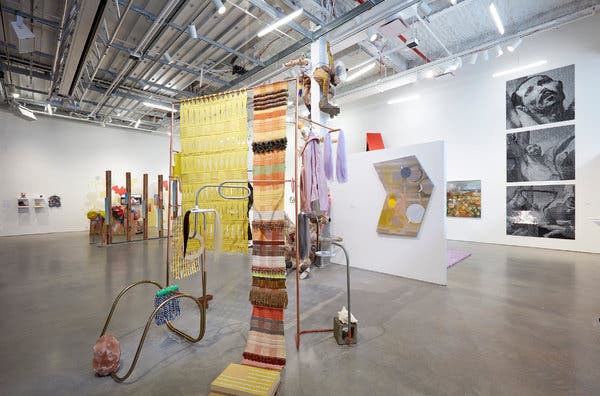 Installation view of the BRIC Biennial. In the foreground, “Chasing Their Ponytails” (2016-18) by the sisters Lisa and Janelle Iglesias, a.k.a. Las Hermanas Iglesias.CreditJason Wyche, via BRIC

In 2014, the arts organization BRIC inaugurated its biennial, an attempt to survey Brooklyn artists by neighborhoods. Flawed though it is, with a focus on geography that can seem arbitrary, the endeavor has proved valuable at spotlighting some of the borough’s abundant creativity.

“BRIC Biennial: Volume III, South Brooklyn Edition,” which features 19 artists and six satellite shows, is a satisfyingly cohesive rumination on dislocation. Katya Grokhovsky focuses on her 93-year-old Jewish grandmother, who survived World War II and immigrated from post-Soviet Ukraine to Australia. She tells her stories in Ms. Grokhovsky’s absorbing video, “The Future Is Bright,” (2018) which screens opposite a sculpture whose explosiveness suggests the impossibility of encapsulating a life.

Other artists take a more formal approach. Jordan Nassar collaborates with traditional Palestinian embroiderers on patterned landscapes that delicately entwine his Palestinian and American identities. The sisters Lisa and Janelle Iglesias, a.k.a. Las Hermanas Iglesias, live on different coasts and worked back and forth on the sculpture “Chasing Their Ponytails” (2016-18), which looks like a quirky contraption for decontextualizing everyday items.

In Brooklyn, any exhibition about displacement would be incomplete without confronting harsh realities. Fortunately, Connie Kang and Danielle Wu, two members of An/Other, an arts advocacy group for Asians, have curated “Virtual and Real Estate,” a small but mighty show in an adjacent gallery. The centerpiece is Betty Yu’s deeply researched inquiry into the gentrification of Sunset Park. Her earnest urgency is counterbalanced by bitingly clever contributions from Daniel Bejar and Pastiche Lumumba, whose “Woke Gentrifyer Starter Pack” (2019) skewers the New Yorker-reading, nonprofit-working, dog-owning liberal. For many Brooklyn art viewers, this may be where the BRIC Biennial hits closest to home. JILLIAN STEINHAUER