Periodically, we invite well-known artists and arts professionals to create a Short List of some of their favorite artists in the BRIC Contemporary Artist Registry. Here, Joseph Wolin puts together his Short List of artists.

We might reasonably expect a geographically-oriented artist registry to give us a distinctive sense of place. And the BRIC Contemporary Artist Registry delivers, featuring a number of artists whose work strongly evokes particular places—locations, seasons, times of day. But while their art imparts a pronounced feeling for the spaces it depicts, those places are not necessarily the ones we envisioned. There is a there there, even if it is not Brooklyn.

Dominica Paige's photographs indelibly picture specific places, even when they happen to be "nothing." (Nothing, 2013, is actually a rather particular and haunting spot in the American West.) The people in her images—usually lone figures looking away from the camera, into the scene—recall Caspar David Friedrich's Wanderer above the Sea of Fog, with, perhaps, just a touch of the characters in Anna Gaskell's fairytale photos of the mid-1990s. But rather than gazing at the sublime or the uncanny, these people tend to look into the sky or at resolutely ordinary phenomena: bushes by the side of a pool, the surrounding envelope of drying laundry. Tilden, 2012 shows a fashionably dressed young woman standing ankle deep in the water collected in a seasonally abandoned pool in Breezy Point (technically Queens, but Brooklyn-adjacent!), an enigmatic image of hipster anomie. The artist writes of her stand-ins as "ghosts," but they seem solidly present, ensconced in places made otherworldly only by gorgeous, saturated color.

Charlie Rubin's photos also traffic in the resolutely ordinary, subtly transformed into the marvelous. A tree trunk, a palm, or a knot of detritus washed up on the beach become slightly trippy with the addition of inexplicable flashes of psychedelic color. Even the back of an old beater bears a mysterious, out-of-place spot of blue. Through a combination of techniques—staged photos, hand-painting, collage, digital effects, even straight photography when it suits his purposes—Rubin guides us through landscapes convulsed by unconventional beauty as if into a kind of language. The world itself seems to send us encoded messages that we can only begin to read.

Keith Telfeyan, too, gives us the world, made heartbreaking by framing and the way he captures light. Lit streetlamps seen cropped and from below, or the sun—glinting off water, diffusing through fog, casting shadows of trees on the side of a building, backlighting artificial boughs woven through a cyclone fence in front of an implacable plastered brick wall—read as utterly pedestrian yet simultaneously magical, moments of the everyday transfigured as monuments of longing and transcendence by the action of the camera. His is an art of sentiment and emotion, made all the more potent because those things run just under the surface.

How can you not love Deborah Brown's paintings? Her seductive Bushwick confections share a point of view with many of Telfeyan's images, looking up from the street—at streetlamps, rooftops, and tangled telephone lines festooned with kicks suspended from their knotted laces, all silhouetted against too brightly hued skies. But Brown caricatures the hipster epicenter as a fantasia of overgrown lots, lonely tenements fit for steampunk hermits, and calligraphic snarls of razor wire, with nary a shred of gentrification to be found. It's a Brooklyn grotesquerie, to be sure, a neighborhood that never quite existed, dire yet somehow dreamy in its gritty splendor.

A few of Jackie Weisberg's images from the series Gowanus Impressions appear as surreal as anything by Brown or Rubin, despite the fact that they are straight photos. Working in the tradition of the photo essay, Weisberg captures the strangeness of the environs of the Gowanus Canal, one of the most polluted bodies of water in the country and a Superfund site. Grandiose and baroque industrial structures, now dilapidated, toxic sunsets, and the sinister marbled sludge of the canal waters themselves—even some tattered plastic caught on barbed wire and blowing in the wind—appear engendered by the artistic imagination, even though they merely document a very real, and very troubled, locale.

It might seem odd to consider Carl Ferrero's works in terms of a discussion of place, as they comprise relatively whimsical watercolors, often with a textual or conceptual bent. Yet a few of his works, chiefly trompe l'oeil sculptural objects, evoke parts of Red Hook as vividly as a photograph. The fallen, abstracted stop sign of A Punch up the Bracket conjures any number of derelict street corners. More Songs About Anger and Unrest, a row of carefully handmade bits of illusionistic urban flotsam that rest on the floor, synecdochically represents a very particular class of litter-strewn sidewalk, in the fall, probably near a subway, where passersby drink certain kinds of juice and smoke specific brands of cigarettes. It's a world in a nutshell, or, rather, a lovingly crafted pile of trash.

For Nathan Bett, place is the people who live there. A digital update of street photography, Bett's multiple exposures of passersby looking at him and his camera, collapsed into a single image, appear slightly hyperreal. While everyone in his pictures engages in the same activity, differences in setting, clothing, posture, attitude, and expression mark the images with their specific locale, whether Brooklyn, Manhattan, or Beijing. Positing a new relationship—positional, technological, cultural—between the photographer and his subject, Bett discovers that the three most important things in art are still sometimes location, location, location. 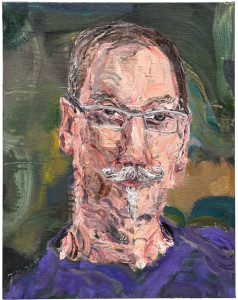 ABOUT THE SHORT LIST CURATOR Joseph R. Wolin is an independent curator and critic based in New York. He is the 2012 – 2013 Art Critic in Residence at the Bronx Museum, and a frequent contributor to Time Out New York. Exhibitions he has organized have been seen at The Aldrich Contemporary Art Museum, Ridgefield, CT; Center for Photography at Woodstock, Woodstock, NY; Islip Art Museum, East Islip, NY; Museo de Arte Contemporáneo, Monterrey, Nuevo Leon, Mexico; Museo de Arte de Puerto Rico, San Juan, PR; Thread Waxing Space, New York, NY; and Tyler School of Art, Philadelphia, PA. From 2003 to 2005, his exhibition of the work of the Winnipeg-based art collective, The Royal Art Lodge: Ask the Dust, traveled to six museums in four countries, including The Drawing Center, New York, NY; the Power Plant, Toronto, Canada; the Seoul Museum of Art, and The Museum of Contemporary Art, Los Angeles, CA. Teaching art history, art theory, critical writing, and curating, he is currently a professor at Parsons The New School for Design, NY; the School of the Museum of Fine Arts, Boston; and Drew University, NJ.
BRIC Rotunda GalleryBrooklyn ArtistsContemporary ArtPaintingPhotographySculpture