Periodically, we invite well-known artists and arts professionals to create a Short List of some of their favorite artists in the BRIC Contemporary Artist Registry.

It has been observed that "we see the world not as it is, but as we are──or, as we are conditioned to see it."* The artists below take a deliberate approach in their visual expressions, with intent, style -- and at times, satire. Through process-oriented pieces, their work revolves around ideas of how we see the world, each other and ourselves.

Melissa Zexter's intricate work caught my attention right away – hand embroidered gelatin silver prints, inspiring a meditative and lengthy process. Using her own photographs, she sews on to them, irreversibly altering the 'document' by imposing her own layer. Of course the images could be unstitched – but the puncture wounds on the paper would remain.

Delphine Diaw Diallo's images are also layered by her own hand, in order to capture what cannot be seen. The portraits from the 'Magic Photo Studio' series are beautiful on their own – but Diallo takes the project another step by painting and drawing over them, adding what she felt was the underlying emotion of her subject in order to deepen their presence.

Newly constructed realities are also a topic for James Reeder, as he constructs dioramas and drawings in order to explore places and relationships. Similar to how memory works, his constructions are equally ephemeral.

Virginia Inés Vergara also portrays a manipulated reality, by photographing through three cameras in order to record the 'fake' nature of natural history museum dioramas (imagine using a camera to look through a Hasselblad, to look through a 4x5 large-format camera, in order to take one picture). Her performative process mimics how our idea of a place is often based on multiple photographs, rather than "a lived experience" of the actual location.

Two other artists with performative processes, are Kreerath Sunittramat and Cat Del Buono, both exploring the politics of gender and identity. Sunittramat explores the complex view of how others see him, with the angst and desire for them to view him as a woman instead. Shirtless during the winter, he uses props as hair and breasts in order to re-see himself as a complete woman through the drawings of Times Square caricaturists.

Cat Del Buono's video 'Decoy,' portrays a woman walking in what apparently is a desirable outfit/look to men – with their leering reactions recorded. Other work explores how societal pressures and stereotypes can be taken to an absurd level, as seen in 'Now I'm Beautiful.'

Azhar Chougle's work while satirical, is much quieter in its presence. In his series 'Unfamiliar Moments Across the Atlantic,' Chougle explores the irony in America through stark black and white imagery. From Ben Franklin getting a face-lift in 'Modernization', to a pack of cigarettes evoking a factory smoke stacks in 'American Sprit,' each image has been intricately planned and executed.

Divya Mehra explores what it means to be felt as an outsider in this country (regardless of whether one is or not) through her piece 'Contemporary South Asian Art.' Not a photograph, nor a performance, the effect is lasting. A reminder that people see each other, not as they might be. 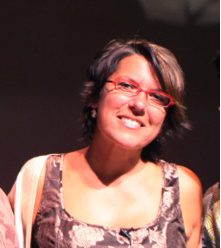 ABOUT THE SHORT LIST CURATOR: Miriam Romais is a New York based curator, editor, photographer and director for En Foco, a non-profit that nurtures U.S. based photographers of Latino, African, Asian and Native American heritage. Her dual nationality (U.S.–Brazil) and fluency in Portuguese/English/Spanish gives insight into various Latino cultures, and is a critical part of her artistic explorations. Her passion is to help artists of color become visible to the art world while having their work remain accessible to under-serviced communities, since photography is an ideal and approachable medium to raise awareness of social issues.

Romais has been a panelist for the Schomberg Center for Research in Black Culture's new series, Visually Speaking (covered by C-SPAN, 4/29/13 and 10/1/12), and was a panelist for (Mis)representation: the Under Representation of Non-Whites and Women in the Arts (PhotoPlus Expo, 10/27/12). She curated exhibitions for organizations such as Aperture (Mexico + Afuera), Light Work (Tracing Memory), SPE (Interstice) and En Foco. As editor for En Foco's Nueva Luz photographic journal, the publication rose to a four-time finalist for a Lucie Award in the support category of "Best Photography Magazine", and is winner of four IPPIE Awards. She was co-chair of the 2010 Society for Photographic Education's National Conference, titled Facing Diversity: Leveling the Playing Field in the Photographic Arts. As a panelist/reviewer, she has served with PhotoNOLA; FotoFest; NYSCA and others. As an awarded photographer, her work has been exhibited in museums and galleries throughout the U.S. and abroad, including the Smithsonian Institution's traveling exhibition Americanos: Latino Life in the U.S.