Eduardo Terranova is a Columbian born, Brooklyn-based visual artist. Greatly influenced by the Pre-Columbian art and ritualistic traditions that he witnessed as a child, Eduardo produces glowing works of art that build upon layers of destruction and creation. Filling the surface with layers of holes, Eduardo reveals the tactile nature of the canvas; he then proceeds to paint the surface with a gold-plating technique. The gold shimmers, reflects, and reacts to the viewers walking in front of it, mirroring their movements and recalling the emotional life held in all works of art. 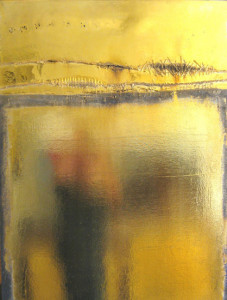 Gold plating isn't a process that you often see in contemporary fine art, although it had a major presence in older art forms. What led you to this process? What brought me to my "Gold Processing" was the inspiration from Pre-Columbian goldwork, mostly from Colombia, where I am originally from. I was ten years old when my grandfather brought me to the Museo de Oro (Gold Museum) in Bogota. I remember being totally hypnotized, in-trance mode and completely transformed. Seeing the reflectiveness, the color and how the surface registered colors, light and shapes on all gold objects was incredible! Perhaps all my emotions were not understood instantly but throughout my life all those feelings have been revealing. For years then I wished to transmit and spark the same energy.

Why did you choose to apply gold plating to canvas instead of objects? Because I wanted a two-dimensional surface to have autonomy. A fabric that acted on its own, meaning a surface that registered light, colors, movements and shapes, so rather in the act of observing the surface (painting) the "surface" is observing you, being alive! Think of this as giant camera lens. Applying gold plating to objects that are three-dimensional delays this effect. The displacement is a bit more retarded because one has to "walk" around the "sculpture". However, sculptural works are in my thoughts. It's a matter of financial resources and studio space.

Do you ever plan to move away from canvas paintings, perhaps into sculptural forms and objects like the many Pre-Columbian gold artifacts found in museums? "Moving away" sounds a bit tragic for me, but I may expand and express into "sculptural forms" and other expressive mediums. The inspiration is there, the passion is there, sometimes is just a matter of space and financial constraints.

Can you perform your method in your studio space or do you need to use specialized equipment from some other venue? My current studio space is almost myopic. However, I do a lot of prep work here. The rest is out of my studio. I rent a space where I use the chemicals, metals, ventilation, etc. at times I have to outsource large works because I don't have a large enough equipment or the proper space and safety to do the gold plating processing. Pre-Columbian artifacts are unique in their gold plating process, using a mixture of metals that create a surface that appears to be completely gold but is in fact mostly comprised of other metals like zinc, copper, and silver, which you also use. Would you say that the rich archaeological history of Columbia, where you were born, influenced you art and choice of medium and process? Absolutely, for me museums that display Pre-Columbian works are not just museums but they are sanctuaries. Growing up in Colombia seeing people wearing gold was common and I don't think people wore gold to show power or richness, I think it is more because it is in the culture. We may not be aware of that in modern times but we carry a vein that connects us to our ancestors. What is more important for me and, what has influenced me tremendously is the "forces" behind this archaeological history and that is of Shamanism. I am not an archaeologist but what I understand is that it is a coherent system of religious beliefs and practices that attempts to organize and explain the interconnectedness with the cosmos, nature and man. The Shamans, being the "interpreters and mediums" subdivide the cosmos into three parts: celestial, terrestial and underground and there are even more divisions. What this does is to fuel me with energy and imagination and allow me to move spatially in my works and to reinterpret different concepts on my paintings. Like my ancestors, I believe Gold has an energy which is transmitted to human beings. My intent is to transmit this energy through my works.

There is a mirror-like quality to many of your surfaces, a reflective nature that that shows the shadows and forms of the world they face. Do you ever take into account the fact that viewers can see their own forms in your work? If so, what does it mean to you? First, I appreciate the depth in which you observed my works and this has not been in the physical context. Yes, the reality of a mirror-like surface becomes magical as it has hidden "dimensions" that dematerialize they world they face, as you observed. This is magical realism for me, altering our realities into the world of the magical and mysterious. My intention and hope is that the viewer has this experience and go beyond his or her own form, a spark of what I lived and continue living, Some of your works have a destructive element in their surfaces and the canvas structure. What led you to this step, instead of continuing to layer upon the canvas and burlap?

Does the destruction of the surface hold any symbolic meaning for you, such as destruction working as a form of creation? Yes, destruction and creation - "shattering the mirror to reconstruct it." The "holes" and/or "openings" in some of my works can signify absence, in the physical sense, meaning, voices of those not with us, either kidnapped, killed and still missing. Colombia has gone through over sixty-year civil war and still counting! Hundreds of thousands have disappeared and still missing. Spatially one may read this as a search for three-dimensionality where light escapes or where light is but if you look closely, some of the holes are stitched. This is the "string" that connects us all from our work into the world beyond. I may repeat what my ancestors believe: the interrelationships between the cosmos, nature and man.

Where did your interest in shamanism and alchemy spring from? Well, I personally called my "paintings" constructions. Because they are constructed with thread and needle, cut and stitched, stretched and unstretched, mutilated and regrown, the gold plating processing create yet other layers, those of zinc, copper, silver and gold. Physically they are finally stretched on stretched bars 36"X42". Ideally they can be displayed on the wall with or without light. They always changing, always moving, like life itself! 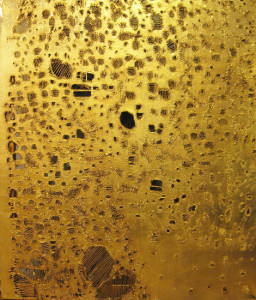