As I walked into the home of artist Sky Vega, winner of the "Viewer's Choice Award" during BRIC's OPEN (C)ALL exhibition, I was shocked by how neat and clean it was. It is difficult to believe that her living room is also her working studio! The only evidence I could observe of her creative life was the guitar laying across the couch, the table by the window filled with drawings for a forthcoming children's book she is working on and of course the atypical yet aesthetically pleasing busts in front of her mirror. 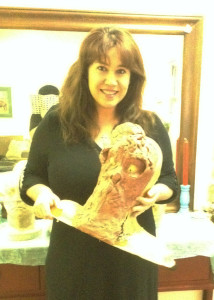 Upon meeting Sky I was rather struck by her welcoming warm demeanor and positive outlook. As we spoke for almost two hours she told me how she believes that her struggles ultimately led to her success. Sky began her career as a musician in Greece after leaving her childhood home of South Africa. She feels that making a living from music was far easier in Europe than in the United States where we have much more of a pay to play attitude. She left Greece and moved to Miami after nine years. During her time in Miami a friend offered her a job as a makeup artist. At first she was unsure that she could do it but her friend told her that "she could paint so she could do makeup". The job went well and soon more make up jobs were to follow. Sky had numerous small successes in music but acclaim has been far easier to come by in her work as a makeup artist. She feels she is truly meant to be a makeup artist. Sky comes from a multifaceted and creative family. Her mother is a classically trained artist whose paintings line the walls in Sky's home with her husband of ten years. Sky spent her childhood surrounded by structures and sculptures that her father would construct from items laying around their home, they had an almost ethereal quality. Both of her parents are artists and her dad is a published children's book author. Her grandfather was also a published artist and author. For these reasons, Sky found dabbling in the book arena a natural addition to her creative output, and seemingly inevitable. Sky's most recent illustrative project is a picture book by Arama Christiana titled When Freedom Came. Being born and raised in South Africa, she immediately felt a connection to the story, which tells of the just work of Nelson Mandela and many other brave souls. The final illustrations in the book were done in monochrome pastels with a full-color front and back cover. In addition to this freelance work, Sky also writes and illustrates her own books. Her current work is a three part series about fun animal facts with playful illustrations. The books are titled Who's Who In the sea, Who's Who In the Zoo and Who's Who In the Sky. She also created a stop-motion music video and song called "Shine" to accompany the series. Sky Vega is truly a polymath with a multitude of talents ranging from visual art to music. She has lived in Brooklyn for ten years and is the true embodiment of the BRIC spirit. She creates works in all of our major areas of focus. For anyone who has seen Sky's work it is clear why she is the 2014 Viewer's Choice Award winner. 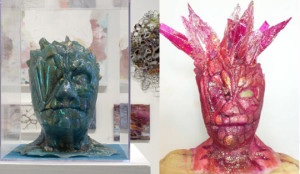 At the tale end of this studio visit, I asked Sky to tell me more about Geode, the work she submitted for the OPEN (C)ALL Registry exhibition. She explained, "There are actually two pieces related to each other, the male is pink named Meteora with large acrylic and plastic head spikes. That was sold last year, and so I decided to make the female counterpart and name her Geode. The original idea began as a cinematic simple story line. I imagined a good man who became burdened by life's harshness. After a time he grew a thick skin, which dried up and became like a rock. The pressures of life were relentless so he began to crack under the pressure. Unexpectedly, his rock-skin grew so brittle that it shed to reveal his true self – a crystalline, beautiful, undefeated superhero. The wonder of this piece is that it is a work of art that can be worn as a prosthetic appliance or it can be displayed for its aesthetic value.I was surprised and overjoyed upon learning that my sculptural piece had won the BRIC Viewers Choice Award, as I was in the company of so many great artists and I'm totally grateful and love being a part of the growing BRIC community of artists." Explore more of Sky Vega's work on her WEBSITE.   - Written by Alexandra Pucciarelli 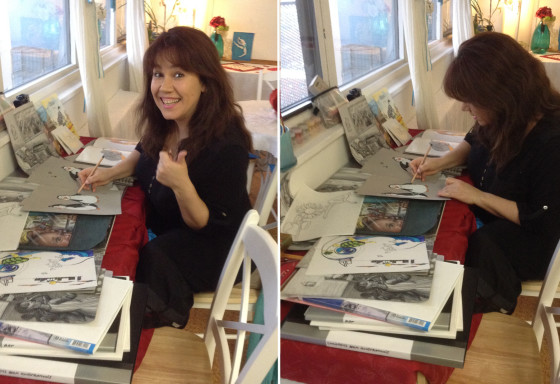