Periodically, BRIC invites artists and arts professionals to create a Short List of some of their favorite artists in the BRIC Contemporary Artist Registry curated around a common theme. The following is a Short List curated by Alva CalyMayor.

When presenting work under Eyelevel BQE (an artist-run project), I spend a lot of time figuring out how to provide the viewers with an introduction to each artist's work and their process. In this case of creating a Short List from BRIC's Artist Registry, I am basing my selections on what each artist has decided to submit to his or her online portfolio.   I see this combination of artists and the way they conduct their work as that which Roland Barthes identifies as "writerly" texts; like a hypertext with non-static forms of representation, where the viewer gains access to their work by several entrances. While exploring each artist profile, I have researched their projects and instead of listing fragments from their practice, I act instead as a harbinger, announcing their recent projects and things to come:

FANNY ALLIÉ, b. Montpellier, France Allié's bench-sculpture A Bench for the Night is shaped in the silhouette of a sleeping person, a reminder that a public bench is a potential bed for some New Yorkers. The dichotomous visual and emotional transformations that take place in an urban setting – how an object becomes a person, and how a person can become an invisible, ignored object – are embodied by the bench, which offers a critical view of how those who live on the street can become dehumanized. A Bench for the Night is located at the NYC Parks Greenstreet on Jackson Avenue and 46th Avenue in Long Island City, Queens.

ANDREA ARRUBLA, b. Bogotá, Colombia Arrubla's Love Sick drawings are featured in Sophie Rabinowitz´s Osmos, Issue 05. A journal of texts and image series by practitioners and professionals, the magazine investigates the uses and abuses of photography. In addition, Arrubla was named the Art Chopped 2015 Champion by a select panel of artists including Kentaro Ikegami and Jennifer Catron & Paul Outlaw. Art Chopped was hosted by Sean J Patrick Carney as part of the programming for the exhibition New Release curated by Erin Goldberger director of Half Gallery.

JESSE CHUN, b. Seoul, South Korea Chun's 2015 series On Paper explores notions of identity, homeland, and mobility. Drawing from her transcultural experience, Chun investigates bureaucratic travel identification documents to examine the ways in which our identities are validated across borders. Her landscapes and poems reveal the complexity of migration: the ideologies, interrogation, displacement and dreams that become a part of who we are.

JUANLI CARRIÓN, b. Yecla, Spain Carrión's project Outer Seed Shadow (OSS) is a series of public art interventions that materializes the union between plant and human interaction, using different plant species as representatives of social groups or individuals. OSS is an investigation that can happen at different geographic levels—county, city, borough, neighborhood, district, block or building. Carrión is currently a resident artist at the Lower Manhattan Cultural Council Program: Process Space, his work Homage investigates the circumstances that concern Carrión as an artist and his relationship to painting and its role in the greater landscape of the art world. In the past year, Juanli has been purchasing anonymous and unsigned naturalist landscape paintings from estate sales, thrift stores, antique stores, and the like, intending to use them as his medium to generate a series of abstract exercises that intend to question the abstraction itself while questioning the value of the artist's gift or talent while repurposing the same materials used by an anonymous painter, thereby revaluing the artwork dominated here by the concept behind it.

GRAYSON COX, b. Indianapolis, Indiana Cox will be a summer resident at The Red Door in Hamburg, Germany and is currently part of the following group shows: GRAY WOULD BE THE COLOR, IF I HAD A HEART, curated by Tim Hawkinson at Marc Straus Gallery (299 Grand Street New York, NY 10002); New Adventures in Vexilloligy, KUNSTVEREIN AMRUM, Amrum, Germany; and Iced Coffee, 2015, which is currently being exhibited at The Museum of Longing and Failure in Bergen, Norway, a collecting entity dedicated to the exhibition and collection of small sculptural works that embody notions of longing and failure.

MARIA ELENA GONZÁLEZ, b. Havana, Cuba González's Tree Talk series received the Grand Prize in the 30th Ljubljana Biennial in 2013. Skowhegan Birch #2 is a sculpture/music composition; González translated bark patterns into a digitally cut roll for a player piano to see what kind of sounds would result. When played, the scroll has an unexpected "score." The phrasing, polyphony, and rhythm seem deliberately composed and modern. This project allows us to hear the "music" of the birch tree, and reminds us of the inherent logic that exists in all of nature's patterns.

WILL RAHILLY, b. New York, NY In 2015, Rahilly and Small Editions, a Bookbindery and Studio located in Brooklyn, released ØlllØ,a visual experience. For its release, Small Editions hosted an in-person book licking session for the first 50 books sold in the edition. Thinking about bookends, Will Rahilly projected one of his earliest videos, Blastulacon, and then one of his newest, Blue Dot as part of the release. Harnessing words from Ben Fama's poem, Los Angeles, Blue Dot is a pulsating visual experience. In the poem Fama writes about an abstracted blue dot pulsing down a boulevard. Rahilly expands this idea into virtual environments and pathways that riff off of the internet, visual media and separation. Blastulacon (2015 cut). An exploration of image and compulsion. Inspired by Japanese cinema, video games, eczema and bad internet art, Blastulacon tells the tale of two isolated characters and their fantasies — gastronomic, sexual and otherwise.

ADAM P. SMITH, b. Arcata, CA Smith´s work is part of several group exhibitions this summer including spaces and galleries such as Regina Rex, New York; Invisible Exports, New York; Louis B. James, New York; and LVL3, Chicago. He is currently part of an exhibition called Not a Painting at The Hole Gallery, New York, a group show of wall works that are contingent upon painting, or refer to painting, or negate painting; but are not paintings. The exhibition is on view until July 26. 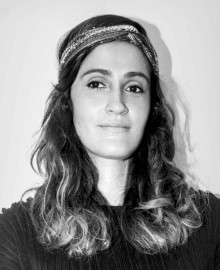 ABOUT THE SHORT LIST CURATOR Alva CalyMayor is an artist who works in a variety of media. Alva uses a visual vocabulary that addresses social issues, perceptions of safety as well as patterns of mass consumption. She keeps track of its manifestations and the trace they leave as they are discarded, repurposed or become no longer functional. Her work has been exhibited in: Collective Show Mexico (Casa Maauad, México, D.F.), Spring Break Art Show (NoLIta, N.Y), at MWOW show curated by artist Grayson Cox (Knockdown Center, Brooklyn, N.Y.), and together with peers Aurora Pellizzi and Natalia Porter, curated by Remy Amezcua (Sensei Exchange, N.Y.). Alva has recently participated in the Air Residency at the Ace Hotel, curated by the BHQFU. She was a Mentor in NYFA's Program Mentorship for Immigrants Program (2014), she formed part of the 27th Bronx Artist's in the Marketplace during 2006-2007, and received a Grant from the Stephen Sprouse Scholarship Fund for pushing the boundaries within the printmaking field. Alva has been recognized in three recent publications exploring and showcasing art in a non-commercial format and for her collaborations with fellow artists through Eyelevel BQE, project that she co-funded in 2008: Interview Magazine (2013), "Alternative Histories," New York art spaces from 1960-2010, MIT Press (2012), Artists in the Marketplace second Biennial; "The Other Marketplace," Lia Zaalof (2013).